As the election of the century approaches, a small army of cheerful Texans are working to awaken their friends and neighbors to what they see as the very real possibility of a peaceful secession from the bondage of Washington, D.C.

“I’ve never had anybody get violently upset at me for mentioning independence,” Regina Cowan, 43, told The Daily Caller News Foundation. “You know there’s some little ladies that, you know, give us the thumbs down or something like that. But for the most part everybody is, excuse my language, but they’re like ‘Hell yeah!’ you know, ‘Where do I sign up?'”

Cowan spends as many as eight hours a day fielding emails and phone calls from a growing number of Texans eager to get involved in the Texas Nationalist Movement. Other times she heads out into the community to connect with voters, hoping to persuade them to join the effort to secede. Previously uninterested in politics, she now also works with the local Republican party.

“Being that I’m a Republican county chair, I do think that [Donald] Trump will probably be in my lifetime the last hope to make America great again,” she told TheDCNF. “But as a Texas nationalist I also know that Trump or Hillary [Clinton], either one is not our only option. We have every right to become independent.” 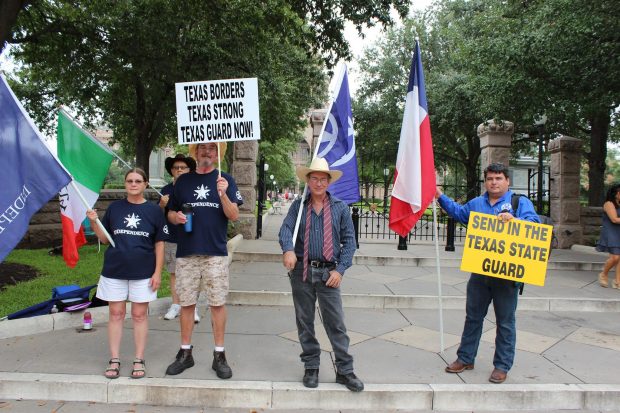 Another volunteer for the movement puts it this way: “We see Washington going down a road that’s away from the Constitution, away from limited government, away from individual liberties. And we’re like you know what, um, you can do that if you want, but that’s not what Texas signed up for when we joined the union, so we’re going to part ways at this time.”

That’s from Ryan Thorson, A recent volunteer dropped off in Texas by the U.S. Army, where he spent most of his eight years of service as an intel analyst. His wife is a captain in the U.S. Army National Guard. Like Rowan, he believes Texas could operate just fine on its own, pointing to its military capabilities, strong economy, and independent power grid.

“We can’t save Washington,” he told TheDCNF. “But maybe we can save Texas.” 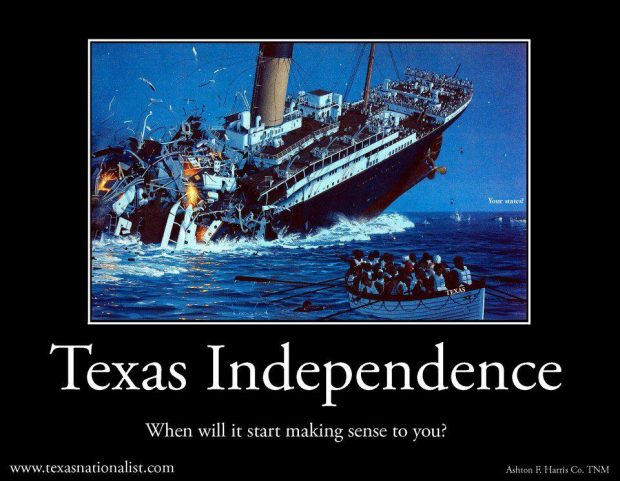 A meme posted by the group on Facebook compares the U.S. to a sinking ship. (Texas Nationalist Movement/Facebook)

The idea of Texas secession is nothing new, even if the idea is more typically regarded as a pointed joke than a serious movement. Various groups have taken up the cause over the years, perhaps most notoriously in the form of the Republic of Texas, which operated on the belief the state was illegally annexed by the U.S. government and remains a sovereign nation. The movement resulted in a deadly standoff with police in 1997.

The Texas Nationalist Movement, however, was born out of a summit called in the early 2000s aimed at bringing as many pro-Texas independence organizations as possible together under one umbrella for the purpose of seeking a peaceful exit. Its supporters have no such view of illegal annexation, but they do believe secession is well within the state’s constitutional rights

“We’re about peaceful and legal independence for Texas,” Thorson told TheDCNF. “We are not for armed revolution. We are not a bunch of guys who sit around and play government, like ‘Okay I’ll be the president today of Texas, yep!’ You know there are some people who do that — and that’s not us. That’s not what we’re for.”

The all-volunteer movement is made up of about a dozen people in central leadership, some 296 field directors tasked with setting up local teams and about 4,000 volunteers in the field. Their goal right now is to secure a referendum vote on Texas independence, drawing particular inspiration from the success of the Brexit movement in the United Kingdom that has resulted in a vote to leave the European Union.

Some 320,000 people have so far pledged their vote for the movement online, a far cry from their goal of 5 million votes and a fraction of the Texas population, but a number the group’s president, Daniel Miller, says is steadily increasing. 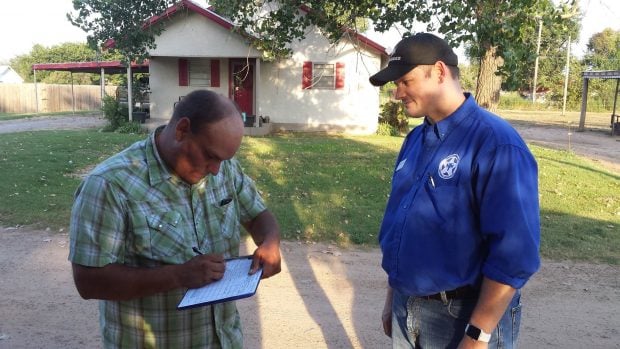 For Don Teer, a former Army soldier turned industrial electrician who lived in California for 17 years before moving to Texas in the 90s to settle down and raise a family, the tipping point was Barack Obama’s win in the 2012 presidential election. The American dream had “fundamentally changed” in his mind, and he worried about the future for his kids and grandkids.

“As I looked around for what to do about that, I decided that probably the best thing to do is for the individual states to finally take up their sovereignty and kick the feds to the curb,” he told TheDCNF. He had already stumbled across the Texas Nationalist Movement online, and decided now was the time to get involved.

“I went in full bore,” he said. “I said look, I need to be involved in this just as much as possible. I’ve got grandkids and I want em to grow up in a free country, so put me where you need me.”

Teer is now the national field director, sending local teams to fairs, gun shows and other community events to inform Texans about the movement and to gather the “yes” votes it would take to win a binding referendum. 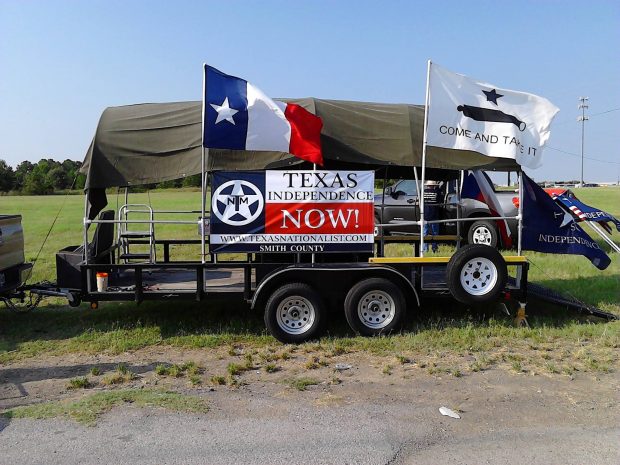 “We just ask a simple question,” he told TheDCNF. “Would you vote for Texas independence? Probably 80 to 90 percent of the people I contact say yes.” Since Brexit, he says there’s been a marked increase in interest.

But the Republicans controlling the Texas legislature, whose support they would need to get a vote on the ballot, have so far refused to publicly support the movement, and party leaders in Texas have quashed other attempts to raise the issue, such as a bid to get a resolution on independence debated on the floor of the Texas GOP convention.

“There are just certain things that don’t have legs,” Republican state Rep. Allen Fletcher told TheDCNF. “A secessionist movement, a referendum, they have zero chance of getting that done. Zero.”

A much more realistic scenario in Fletcher’s mind, who still refers to the Civil War as the “War of Northern Aggression,” would be a constitutional convention of the states where Texas makes a strong assertion of state’s rights.

“We’re talking about taking it to the next level, you know if you have someone like Hillary Clinton running our country, cause I think she’s definitely going to be a blight on our society,” he said, adding: “I can see Texas basically telling her to shove it.”

A desire to protest over something like an effort to weaken the 2nd Amendment or institute a single-payer healthcare system would be grounds for such a showing of resistance, Fletcher told TheDCNf. But that’s a far cry from secession.

Nevertheless, Miller and his supporters are optimistic.

Citing victories such as a strong showing of support for secession from delegates at the Texas convention, and internal polling that finds broad support for the movement, Miller told TheDCNF he’s convinced that most Texans support the idea of leaving. 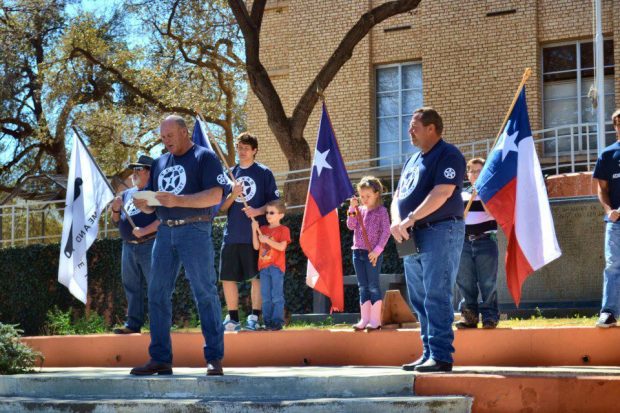 “What if Texas were able to keep $300-plus billion dollars and not have it wasted by federal bureaucracy?” Miller told TheDCNF. “What could we do with that? What could we do if Texas — what if we did not live under 180,000 pages of federal laws, rules and regulations, administered by 440 separate agencies and 2.5 million unelected federal bureaucrats? What would we do with that? We’re not solely a response to something that upset us in the federal government.”

The biggest hurdle to the movement, he says, is the incorrect notion that it’s not a plausible idea.

“Our greatest enemy is not the federal government or the bogeymen that are in people’s minds,” he told TheDCNF. “But the greatest enemies that we face here in Texas are fear, doubt and hopelessness. The folks in the opposition on this issue are really great about playing on people’s fear.”

He and his supporters point to the exaggerated consequences of Brexit as evidence independence can be gained peacefully and successfully, and refute the notion that things such as the Civil War or the Supreme Court ever settled the matter of secession. In an extensive section of the group’s website devoted to such questions, the group dismisses out of hand the idea that a war or an imperfect court could ever do away with the sovereign right of the states to self governance.

Citing the 10th Amendment, Thorson told TheDCNF: “All powers not prohibited to the states and not enumerated to the federal government remain with the states or the people. That includes the power to leave the union.”

The word on the street in Texas, according to Thorson, Teer and Cowan is that a Clinton win would push the state right over the edge into a move toward secession.

“We’re seeing such an anti-Hillary vibe here,” Teer said. “Lots of folks, one of the things they tell me is this will definitely be a sure thing if she gets elected.”

“From what I’ve been hearing just out and the field and everything is ‘If Hillary wins, we want to go,'” added Cowan.

“Here’s the deal,” Thorson said. “If the United States is tired, if Lady Liberty is tired of holding that torch, then give it to Texas. We’ll take care of it. That’s how we feel.”