Oy Vey! Donald Trump‘s blonde surrogate Scottie Nell Hughes really needs some Zzzzz’s. That, or else she suddenly and mysteriously slipped into fluent Yiddish over the weekend on CNN.

During a Sunday appearance, she referred to the Molotov cocktail featured in a 2012 video by Jay Z and Kanye West as a “Mazel Tov” cocktail. In the video, Jay Z threw the cocktail at police.

“I am laughing about it on one hand because it is funny and I’m loving some of the comments,” Hughes told The Mirror in a phone call Monday. “On the other hand, there was a really great point that was made that is being missed in all of it. This is a great distraction. I wished it didn’t happen. To throw anti-Semitic [attacks] at me is offensive to my very Jewish mother. Yes, I was raised Jewish. I’m evangelical. My mother is a practicing Jew. It’s really complicated. I was raised in a very pro-Israel household. I can laugh about it. I think with ‘Make America Grapes Again’ and this I’m going to have a very stiff drink at the end. Everyone makes gaffes. We’re all on our last bit of energy. I think people needed comedic relief and I was the brunt of it.”

Hughes has clearly surrendered to the one thing that pundits face in any election cycle: exhaustion.

Hughes is not planning to take things easy in the final stride up to the election.

But will she sleep? “I’m hoping to,” she replied. “I’m going to be praying tonight.”

Hughes, who has taken a lot of ribbing on social media, blamed her mistake on forgetting to nap. 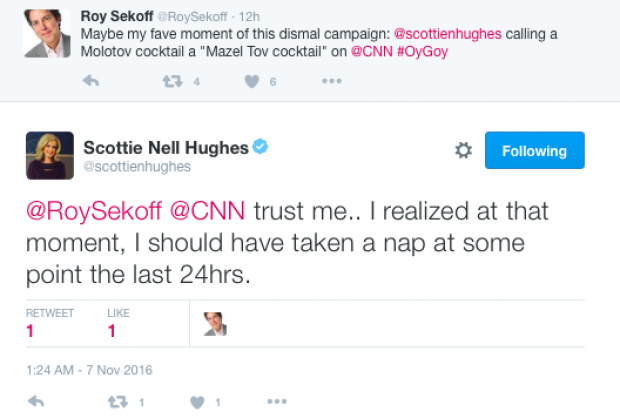 She tried to correct HuffPost founding editor Roy Sekoff, writing, “FYI, oye vey.” (Except according to online searches there is really no “e” on the end of that word.) He replied, “Oye vey”? Is that what Latino Jews say when they look at the R line on the ballot?”

Hughes maintains her sense of humor in even the most chaotic TV panels. This is a woman who, after all, appreciates the Bible as much as she does 50 Shades of Gray. She has also put up with CNN commentator and GOP strategist Ana Navarro repeatedly yelling “grab them by the pussy” at her even after Hughes told her that to please stop, her daughter is watching the show.

Asked for a thought that makes her want to cry, she once told The Mirror, “Hillary moving into the White House and Bill being the First Dude.”