Washington, D.C. — Never Trumpers flocked to a D.C. watering hole on election night to mingle with “true” conservatives and ruminate over the imminent election of Democratic nominee Hillary Clinton.

Blocks away from the White House, The Lincoln Restaurant sits among various downtown attractions near the Logan Circle neighborhood.

Inside it, NeverTrumpers mingled. Red, white and blue balloons sat stuffed in nearly every corner. Glass jars hanging from the ceiling provided an almost hipster-like air, a welcome complement to an already off-kilter party.

A cardboard cut out of Trump wearing his very own NeverTrump t-shirt watched attendees as they entered. 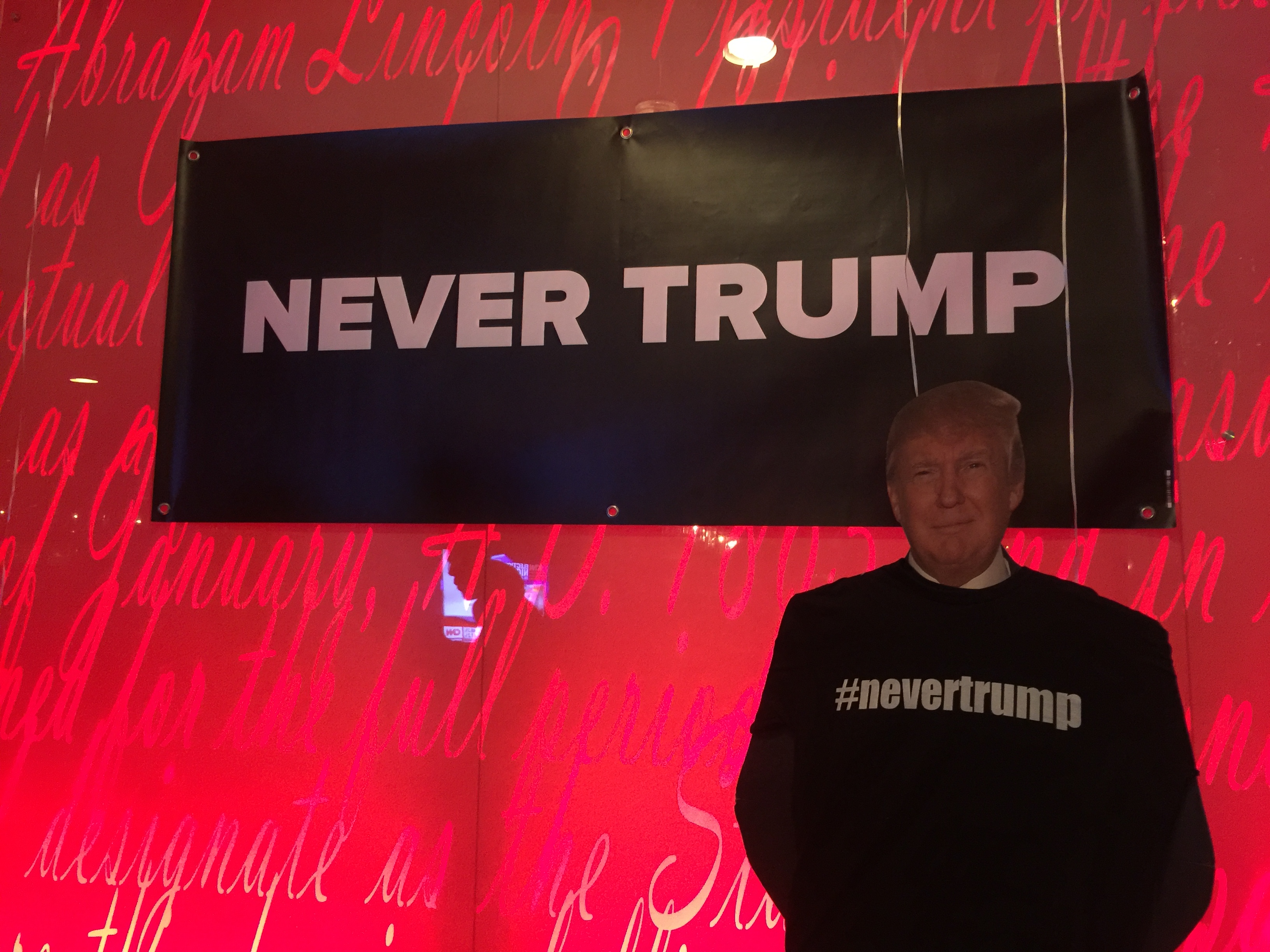 Within feet of the door, an already roaring crowd of 300 #NeverTrumpers imbibed election-themed cocktails and partook in heated political conversations. The usual things one hears when discussions of Trump arise made cameos: Trump’s plan to build a wall and his history of degrading women — specifically the comments he made to Billy Bush. There was even a hat tip to Trump’s “business acumen.” 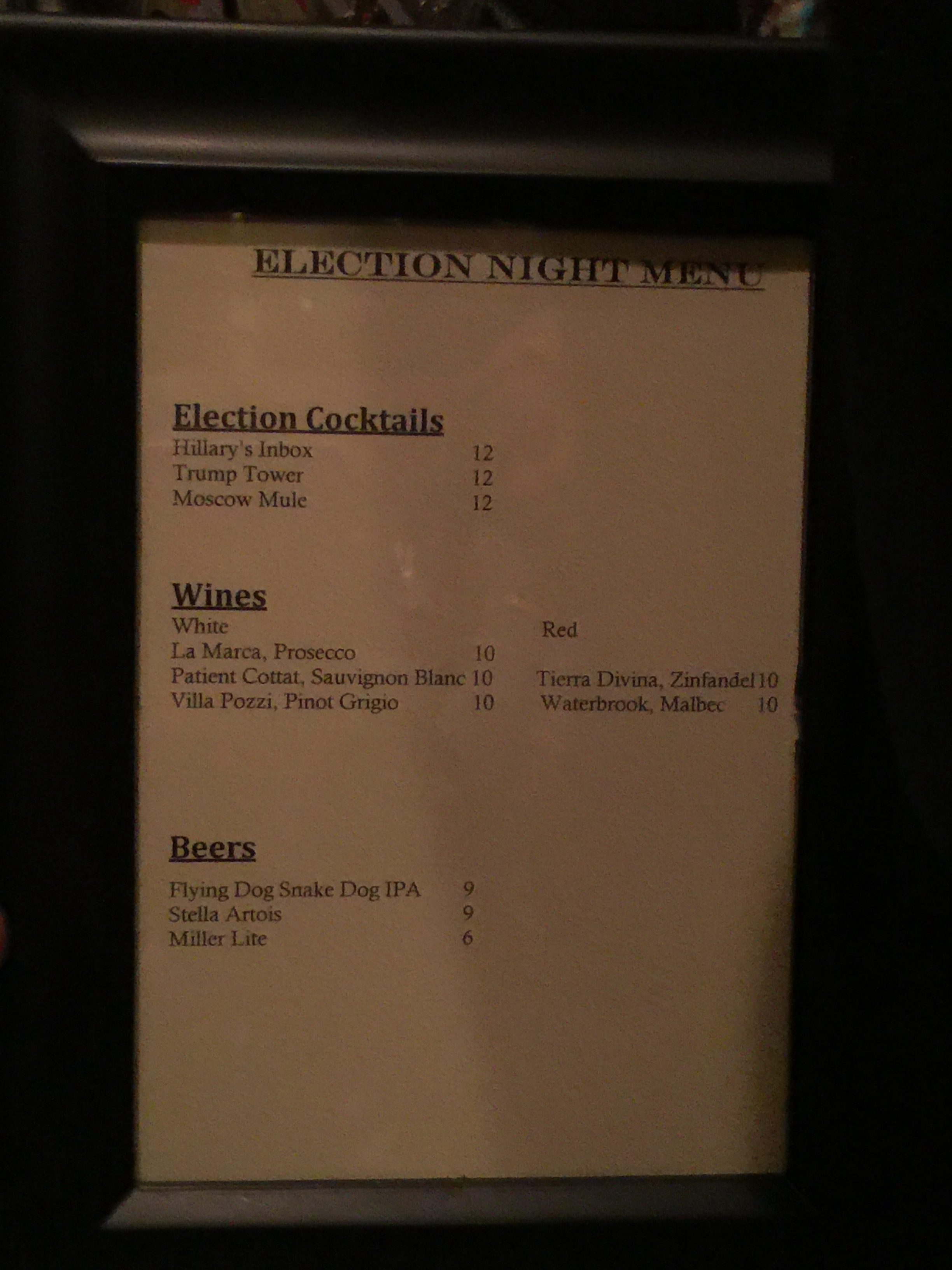 One of the most striking things about the crowd was the diversity in age, race, socioeconomic background and just about any other category one could conjure up. It was not a bunch of old white people in a stuffy room bemoaning the campaign season. Although, have no fear, those were in attendance as well. There were college students, families, political activists and members of the D.C. elite. All of them came together Tuesday evening with one common purpose: to watch Donald Trump routed.

Greeting guests with #NeverTrump buttons was the leader of the movement and the person responsible for the election night rally, Andrew Weinstein, a man dressed in a black tie with “Never Trump” written on it in bold white print.

Discussing how this all came about with a group of attendees, Weinstein explained the impetus for the Never Trump movement.

“It’s an opportunity for Republicans to come together to talk about the future of their party,” Weinstein continued. He described how the Republican Party has been damaged, even “poisoned” by the emergence of Trump. “Five years from now, if Donald Trump wins, the Republican party will be dead.” 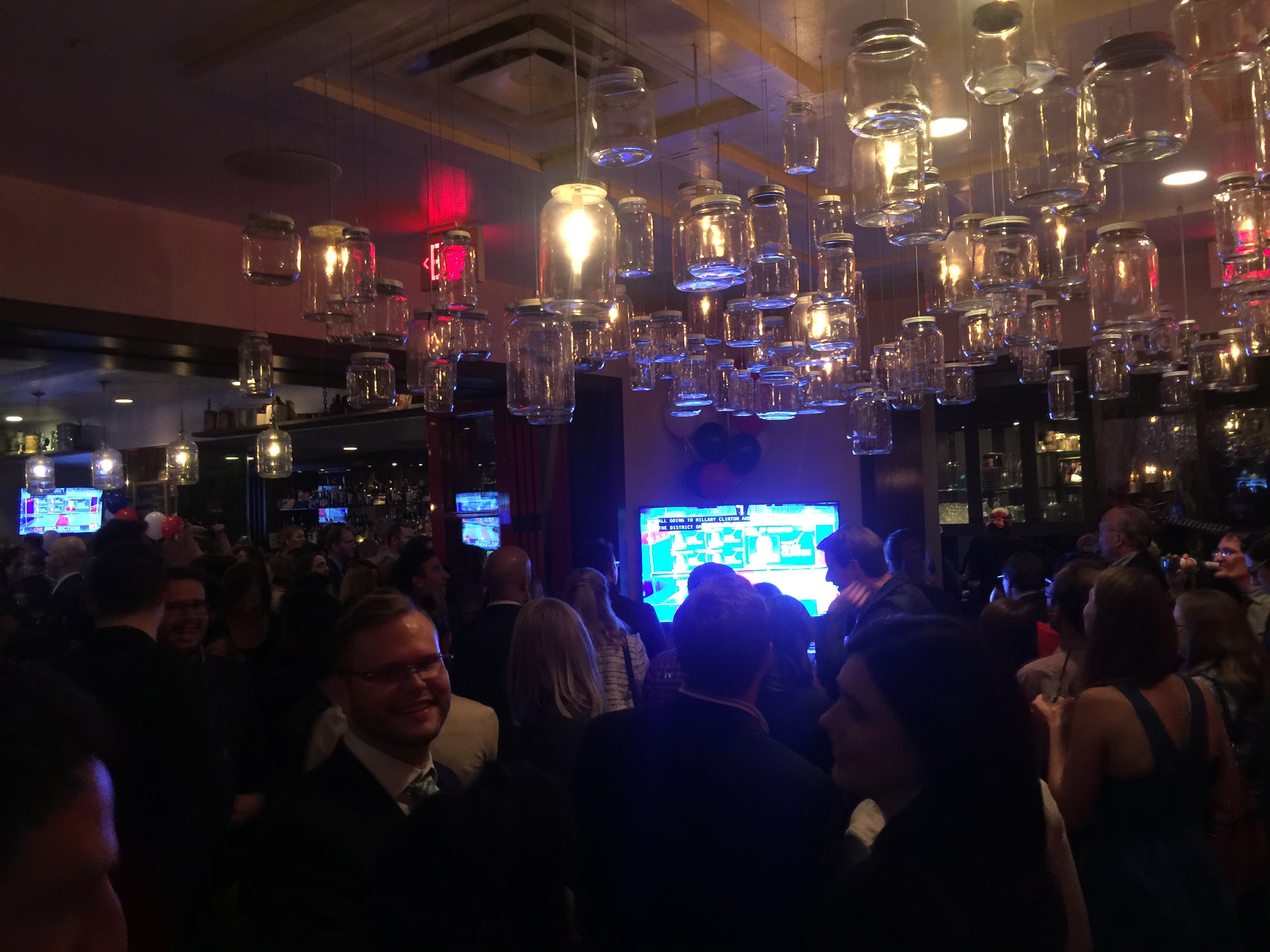 Shortly after commiserating with Weinstein, I found myself in a group of long-time Republican supporters, and a former adviser to President George W. Bush. In the midst of the political discourse, the former Bush adviser, dressed in a finely tailored navy suit and wearing expensive glasses, began to describe why he attended the event.

He expressed grave concern for the future of the Republican Party, an institution to which he has given much of his time and effort over his 70-plus years on this Earth. Detailing his general disgust for Trump, he said this election was the first time he ever voted for a Democratic candidate in a presidential election, a move he never thought he would be “forced” to make.

The former Bush adviser was not alone in his distaste for Trump and decision to vote for Hillary Clinton.

The general consensus among establishment Republicans was they felt forced to vote for a Democrat. One self-proclaimed Reagan Republican, attending with her high school-age daughter, told TheDCNF she has never felt so left behind from a party she voted for since 1984.

A number of middle-aged seasoned Republican veterans felt the same. But what about the younger, Millennial-aged Never Trumpers in attendance?

Three women, all registered Republicans, touting pins that read, “Republicans For Hillary Clinton.” Dressed in professional attire, they were drinking wine and laughing off in the corner of the room.

Despite their predilections for Republican values, the young women are voting for Hillary because they find Trump to be “morally reprehensible and liberal in all of his policies.” One of the women, a 32-year-old lawyer, said Trump, “does not deserve the respect that the office requires and demands of the president. He does not respect his fellow Americans.”

Canvassing the crowd, it appeared the vast majority felt disenfranchised, disgusted by their nominee and harbored little hope for the future of “their party.”

As state election centers began calling states for Trump and Clinton, all eyes in the room fixated on the televisions dispersed throughout the venue. Images of Clinton flashed as key states like California and New York were called, and the crowd went wild in celebration. A room full of registered Republicans began cheering, and in some cases leaping in excitement at the prospect of Trump losing. 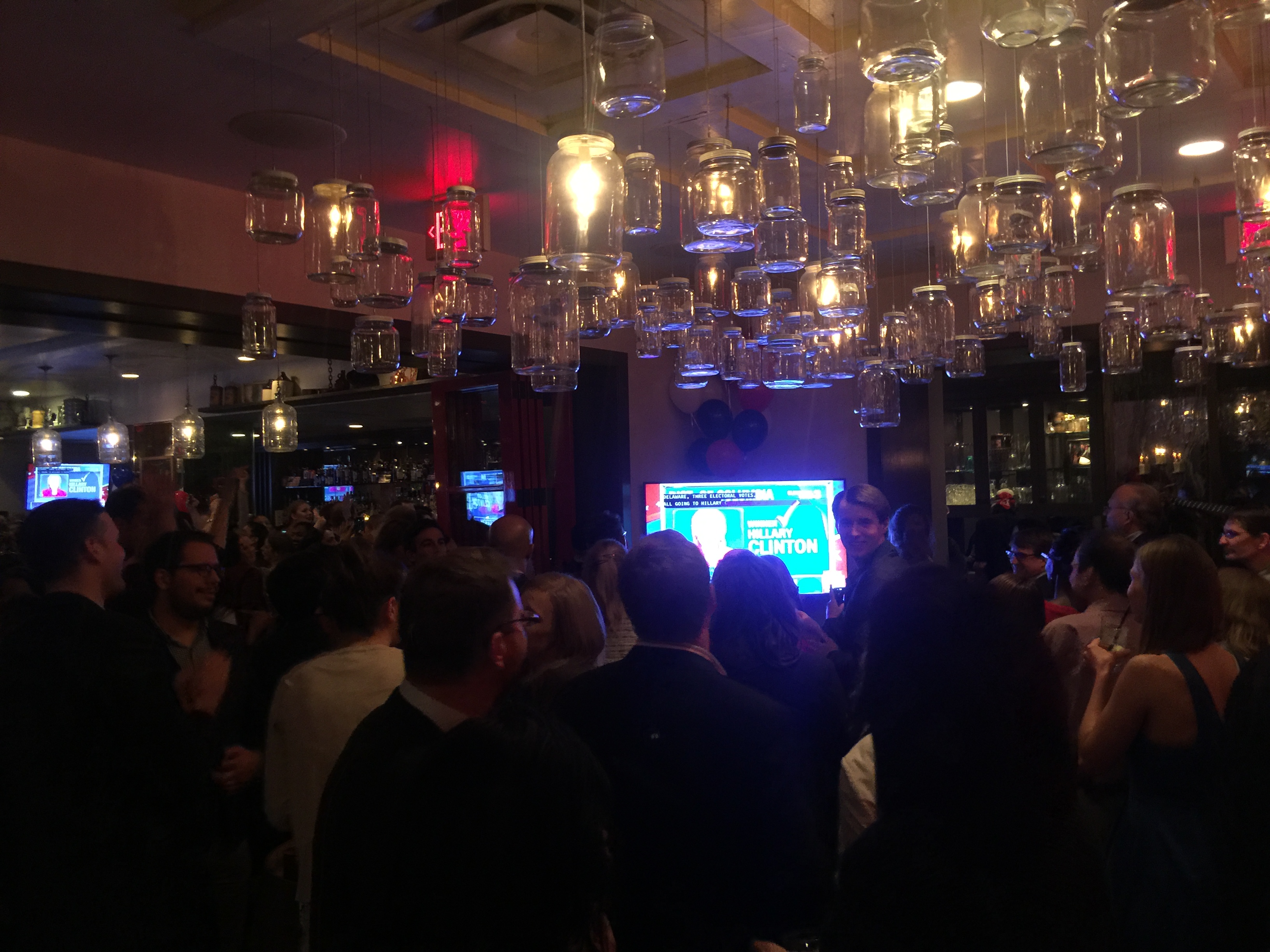 Laughter bled away when the winning started. Replacing it, subdued murmurs. Disbelief gave way to belief. 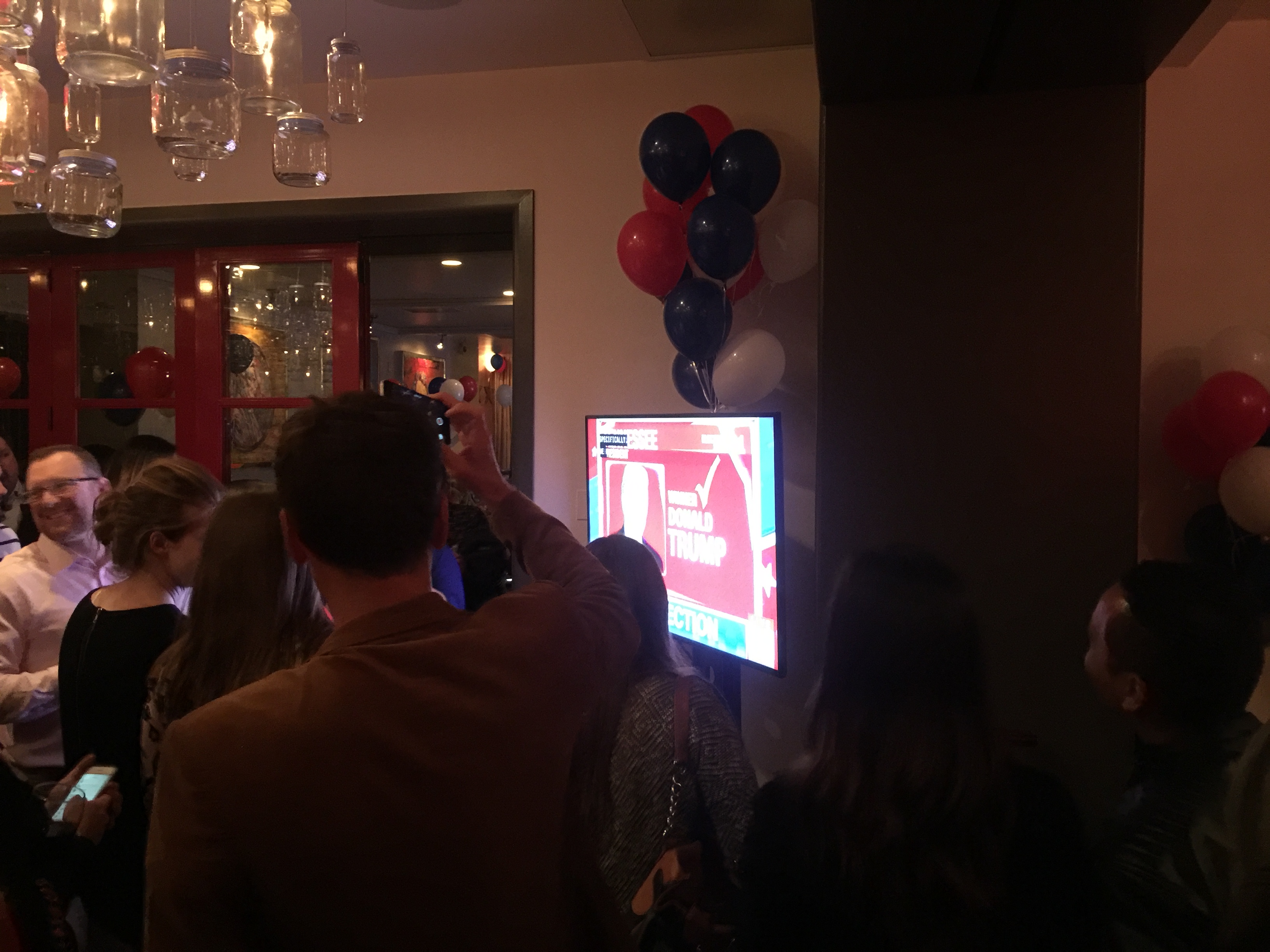 The Never Trump natives turned to alcohol in droves. At only 9 p.m. EST, the bartenders looked ragged serving the shouldering and jockeying masses.

At 9:15, one man combed his hands through his hair, looking as if he might pull a chunk of it out. He sported a look of anxiety, eyes locked in on the electoral map as pundits reported the latest numbers.

News broke of another win for Trump and tensions soared to new heights.

While leaving the venue, a picture of Trump flashed on the screen with an electoral map showing him leading Clinton by 20 electoral votes. Some in the crowd moaned, others screamed in outrage and threw their arms up, spilling their $12 cocktails on the floor. Some remained stoic, puzzled looks seared into their faces.

A crowd full of #NeverTrumpers realized the folly of absolutes — a Trump America is no longer just something of the headlines.