Disgraced former GOP Rep. Aaron Schock of Illinois, once seen as a rising star in the Republican Party, was indicted Thursday following year-long criminal investigation by the Department of Justice into his use of federal funds.

The Illinois Republican slammed investigators for using federal resources to “attempt to manufacture a crime.”

“I simply cannot believe it has come to this,” he said in the statement. “I intend to not only prove these allegations false, but in the process expose this investigation for what it was.”

His downfall began after it was discovered he spent roughly $40,000 in taxpayer dollars, which he later reimbursed, ornately remodeling his Capitol Hill office in the fashion of the PBS hit series “Downton Abbey.” 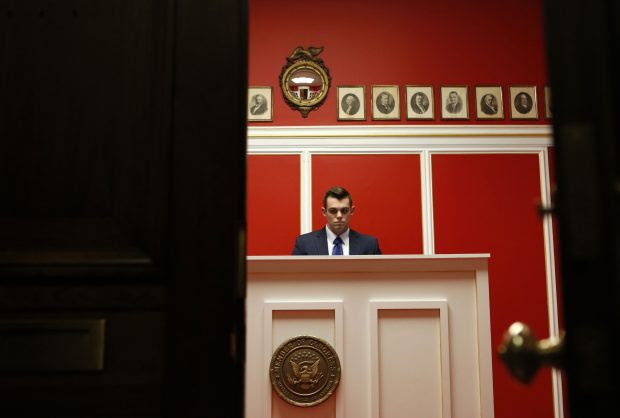 Numerous instances of misuse of campaign and federal dollars were then uncovered – including funds being spent to take staffers and interns to a Katy Perry Concert, improper car mileage reimbursements and chartering of private planes – a violation of the Congressional Rules of Conduct.

Schock – who gained notoriety for his enthusiasm by posting on Instagram and posing shirtless in Men’s Health magazine – stepped down from his seat in March, 2015, saying the media attention drawn from the scandal was “too difficult for me to serve the people of the 18th District with the high standards that they deserve and which I have set for myself.”

Elected at the young age of 27 in 2009, he was ironically known for being a fiscal hawk, sitting on the powerful House Committee on Ways and Means, and serving as deputy minority whip under then-Minority Whip Eric Cantor.