These last two days have been rough ones for students on many of America’s cloistered college campuses. After it became apparent that Republican Donald Trump would win the 2016 presidential election, there was much lamentation. There was wailing and gnashing of teeth.

How bad was it? How many Trump tears were shed? Let’s take a look.

“This is catastrophic for women, for minorities, for our country in general,” senior Sophie Neiman told the student newspaper. “I’ve seen people weeping in the streets. I just cried onto my friend’s shoulder.”

“My civil rights have been compromised,” sophomore Adam Snyder proclaimed.

Junior Deepti Varathan said gay people are worried they won’t be able to get married. Other people fear deportation. “They were just nightmares before because we were like ‘Oh yeah, Hillary’s definitely going to win,” she said.

Here’s what the early morning scene looked like on the fancypants campus:

Across the street from Columbia at the all-female haven of Barnard, students who couldn’t handle Trump’s victory started a petition late Tuesday night to cancel Wednesday classes.

@Toni_Airaksinen @CHSommers behold, the petition. An actual petition to cancel classes because the outcome of the election is triggering. pic.twitter.com/bnl0UHc8tG

Classes weren’t canceled, but only 50% of the students showed up to class today, maybe less.

A single year of tuition, fees and room and board at Barnard currently costs $65,992. (RELATED: Elite College Girls Demand Trigger Warnings About The Real World)

Michigan students who oppose Trump were in no mood to hail the victor in the presidential election in the aftermath of the election. Someone — or perhaps a group of vandals –spray-painted “Kill ‘Em All” and “Fuck America” onto a large public rock on campus. The paint showed a donkey and elephant, representing the Democratic and Republican parties. (RELATED: ‘Kill ‘Em All:’ Trump Haters Lash Out At University Of Michigan After Election)

Painting on rock at corner of Hill and Washtenaw says “Kill Em All” with what appears to be logos for both political parties @michigandaily pic.twitter.com/J1dWARInUJ

The taxpayer-funded campus also saw substantial protests, with dozens of students gathering to chant “Pussy grabs back,” “Not my president” and much else.

Students at the Ivy League school in Ithaca held a “Cry In” at the Ho Plaza — complete with colorful chalk — for students beset with grief over Trump’s impending presidency.

It’s not clear if colorful chalk was offered to people at Cornell troubled by the 2012 election.

In any case, throngs of Cornell students were reportedly upset about Tuesday night’s results.

“How the fuck is he winning? What the fuck?” an unidentified student said at an election watch party on campus, according to The Cornell Daily Sun. (RELATED: Cornell Professor: ‘The Fraternal Order Of Police Is A TERRORIST Organization’)

“I’m looking into flights back to Bangladesh right now, so I can remove myself before Trump repatriates me,” senior Shayra Kamal told the student newspaper. “Liberty and freedom are dead.”

“We should’ve died in 2012 while we still had the chance,” senior Mitch Laski added. (It’s not entirely clear what Laski’s statement means.)

Students at American University took out their frustration about Trump’s election by burning American flags on Wednesday afternoon.

“Students have all these feelings of grief, disappointment, anger and they need a space in which to work them out,” an unidentified professor at the perennially safety school told the Fox station. “No one can start to talk about reconciliation without authentically grieving first. International students are scared. Students of color or LGBT queue are scared. How do we make them feel safe?” (RELATED: American U. Law School Professors: Saying ‘All Lives Matter’ Is WHITE SUPREMACY)

A year of tuition, fees and room and board at American currently runs each student about $62,500.

“Not my president,” they chanted, of course. They also lit flares and set a newspaper stand on fire, according to The Daily Californian, the student newspaper.

The mass of students eventually made their way onto Highway 24, a busy and well-traveled freeway.

Around midnight, a woman — a protester, apparently — was hit by a car during the chaos and badly injured. The driver tried to flee the scene. However, a group of protesters surrounded the car and tried to break the vehicle’s glass.

The melee caused traffic to slow to a crawl in just one lane.

“We don’t feel the government is hearing our voices when we say Donald Trump is not our president,” Cal sophomore Esmeralda Cortez told The Daily Californian.

The Cal protest raged late into the night.

Not to be outdone, a growing UCLA protest group that ended up about 2,000 students strong marched down Bruin Walk and then to chic Westwood Village on Tuesday night.

Their chants included “Fuck the wall,” “Fuck Donald Trump” and, of course, “Not my president,” according to the Daily Bruin, UCLA’s student newspaper.

Protesters burned a Donald Trump piñata. They tried to turn over a car.

Sewanee: The University of the South

An unidentified group organized a “non-partisan opportunity” to gather on campus on Wednesday evening to lament Trump’s election.

A message to “friends, professors and community members” obtained by TheDC states that “community members who are having trouble processing the political events that took place last night” should “gather together” on the quad “in hopes of comforting one another and gaining strength through this time.” “Bring your journals, your silence, your thoughts, your shame, you conviction, etc.” 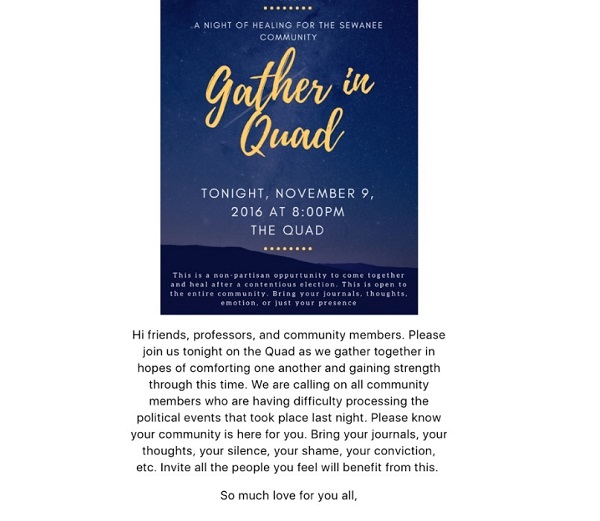 It’s not clear if anyone at Sewanee offered a similar event to people troubled by the 2012 election.

A year of tuition, fees and room and board at Sewanee currently costs $ 54,500. (RELATED: University Of The South Unveils Giant Golden Clitoris Statue In Library)

A professor at the fancypants, insanely expensive Ivy League school in New Haven, Connecticut made an exam optional to allow his students to cope with their psychological devastation after Trump won.

The unnamed economics professor’s email to his students was posted on Twitter by Jon Victor, an editor at the Yale Daily News:

The professor decided that a postponement would be impractical, and a full cancellation would be unfair to everyone who had actually studied. So he made it optional. (RELATED: Ritzy Yale Leftist Frets That Conservative Speakers Will Make Campus ‘Uncomfortable Place’)

Upwards of 200 students from the University of Pittsburgh and other colleges in the Steel City gathered in the streets in the wee hours after the election to march and shout angrily.

Their starting point was Pitt’s famous Cathedral of Learning.

Someone knocked over a construction barrier. Somebody else burned a Trump hat.

“It was getting pretty obnoxious. People were burning things and cursing at cops,” an observer told local NBC affiliate WPXI.

The march lasted for about an hour.

Another student protest also occurred in Pittsburgh after the election. The second group of students was peaceful. They politely stayed on sidewalks as they weaved around neighborhood streets.