WASHINGTON, D.C. — A few protesters gathered outside the White House during Donald Trump’s first visit as president-elect Thursday in a quiet demonstration against the new incoming president.

It was a milder display than the protests that sprang up in Chicago, Los Angeles, New York and Washington, D.C., Wednesday night, but the disappointment was palpable. (RELATED: Democrats Protest President-Elect Donald Trump Nationwide [VIDEO]) 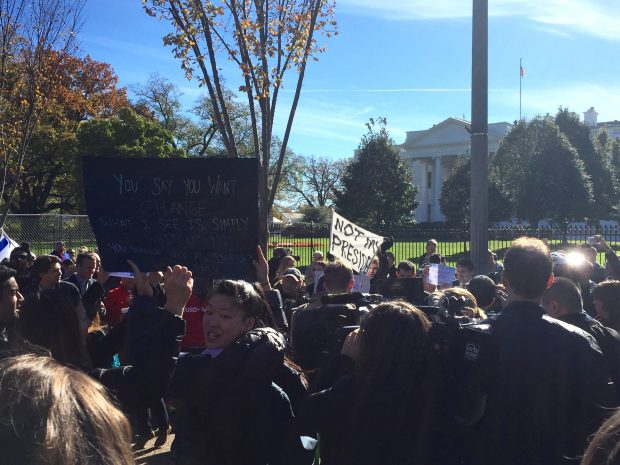 “To me, it feels really personal,” one protestor, Maureen Betz, told The Daily Caller News Foundation about the election of Trump Tuesday evening. “It felt like a betrayal by people who elected him.”

Betz, a social worker, was born in D.C. and grew up in Maryland, and said she is shocked that so many people in the country would support Trump.”I wasn’t aware there were so many people in this country who thought it was OK to put him in the White House. I guess that’s on me,” Betz said, adding “D.C. is pretty insulated.”

On her sign, Betz wrote “Welcome to Washington. Please be advised that sexual assault is a crime according to federal and local statutes. Enjoy your stay!” 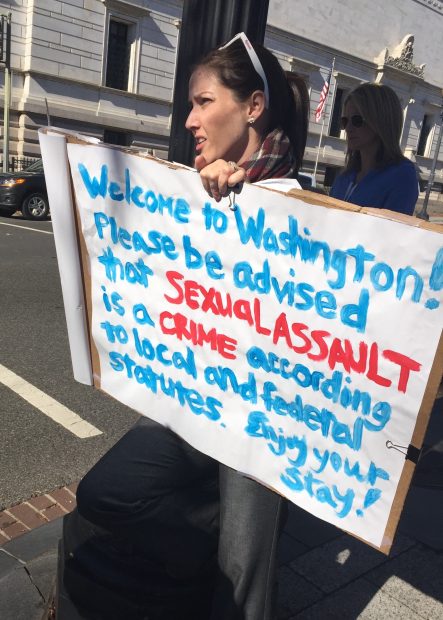 Before Trump arrived, a few people sat on the lawn on outside the West Wing entrance to create signs that say “not my president” in several languages.

One girl, Margaret Gilligan, writes the phrase “not my president” in Spanish and Arabic on a poster board. “Make sure you spell it right,” Gilligan’s friend said. “There are no typos,” Gilligan replied. 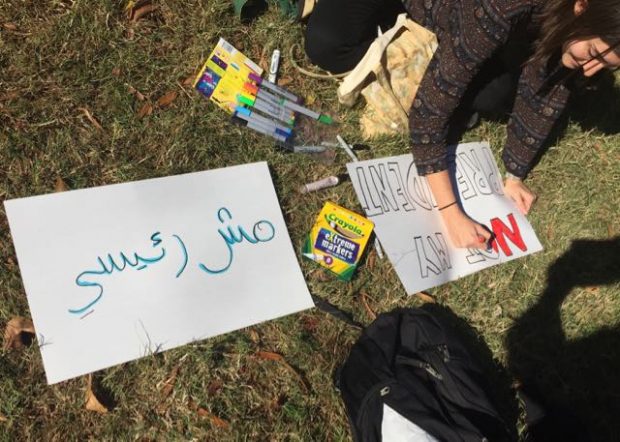 Gilligan, who studies Arabic at American University in Cairo, returned to her hometown of Bethesda, Md., a few weeks ago, just in time for the election.

Trump is simply “not qualified to run a country,” she told TheDCNF. “He’s managed to offend so many demographics. I don’t see how he could possibly represent the country as a whole.”

Gilligan said that many in Cairo, Egypt, blame former Secretary of State Hillary Clinton for exacerbating the situation in the Middle East, and supported Trump as the better option.

Asked what he should do to unify the voters in the United States, Gilligan told TheDCNF that didn’t look possible. “I don’t think there’s a chance for unity going forward. I don’t think people will trust him,” Gilligan said.

On the other side of the White House, where the towering newly-opened Trump Hotel on Pennsylvania Avenue can be seen from the East gate, a few people waited for a chance to see Trump’s motorcade leaving after the 90-minute meeting.

“The new president is meeting with the current president,” a mother said to her young son. “Is he a good guy?” the boy asks of the president-elect. “Well, some people liked the other one more,” his mother said.