Students at Babson College in Wellesley, Mass. are demanding the expulsions of two students because they drove around town celebrating Donald Trump’s presidential victory Tuesday night.

Like many Trump supporters, Edward Tomasso and Parker Rander-Ricciardi were enthusiastic over the billionaire’s upset win against former Secretary of State Hillary Clinton. So they drove around Wednesday in a pick-up truck waving a Donald Trump flag, whooping and hollering.

They ended up passing through the campus of nearby all-female Wellesley College, where they deeply upset the local student population.

Sydney Robertson, a Wellesley student, made a Facebook post the following day denouncing Tomasso and Rander-Ricciardi, sharing two very brief videos of their antics. Robertson claimed the men had spit on a passerby, although neither video shows such behavior. Other social media posts claimed the men had shouted racial slurs, a claim Tomasso vehemently denied in a Facebook apology. (RELATED: Student Admits She Fabricated Attack By Trump Supporters)

Now, Tomasso and Rander-Ricciardi are facing disciplinary action, with a Babson official suggesting their celebration was racist because they happened to celebrate near the Harambee House, an affinity house for black Wellesley students.

“It is important to understand that our students’ behavior was experienced by many students of color and perceived by many others . . . as racially offensive and gender demeaning,” Student Affairs Vice President Lawrence Ward said in a statement.

The students have already been expelled from their fraternity, Sigma Alpha Epsilon, and are under investigation by the school as well.

A flier has even appeared on Babson’s campus, featuring photographs and the names of the two students, labeling them as “RACISTS” and telling passersby to demand their expulsion. 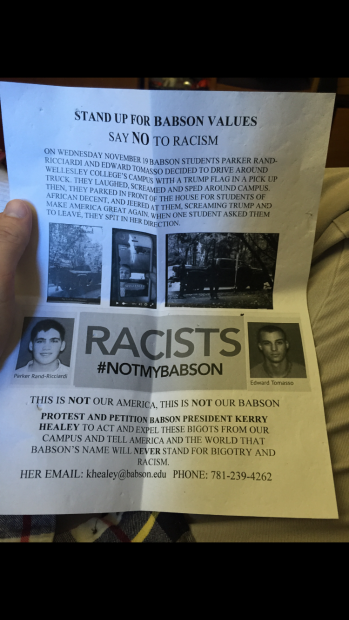 “Protest and petition Babson president Kerry Healey to act and expel these bigots from our campus and tell America and the world that Babson’s name will never stand for bigotry and racism.”

To help students out, the flier includes Healey’s email and phone number.

Babson is a private school, so it could potentially expel Tomasso and Rander-Ricciardi without running afoul of the First Amendment. The school’s code of conduct, though, explicitly guarantees the equivalent of First Amendment rights to students at the school.