President-Elect Donald Trump‘s transition team has not found a way to hide his phone.

In a Sunday morning tongue lashing, Trump ridiculed the New York Times after the publication congratulated itself on its election coverage.

The tweet came after the New York Times sent a letter to its readers gloating about its election coverage. But read between the lines — they’re admitting they, too, missed the boat.

“When the biggest political story of the year reached a dramatic and unexpected climax late Tuesday night, our newsroom turned on a dime and did what it has done for nearly two years — cover the 2016 election with agility and creativity,” wrote Publisher Arthur Sulzberger Jr. and Executive Editor Dean Baquet in a letter published Sunday.

They asked, “After such an erratic and unpredictable election there are inevitable questions: Did Donald Trump’s sheer unconventionality lead us and other news outlets to underestimate his support among American voters?”

The letter claimed that the publication will cover the days to come “without fear or favor.” They stressed, “You can rely on The New York Times to bring the same fairness, the same level of scrutiny, the same independence to our coverage of the new president and his team.”

Trump characterized the letter as an “apology.” But NYT media reporter Sydney Ember shot back at the new President, tweeting, “The letter was not an apology.” 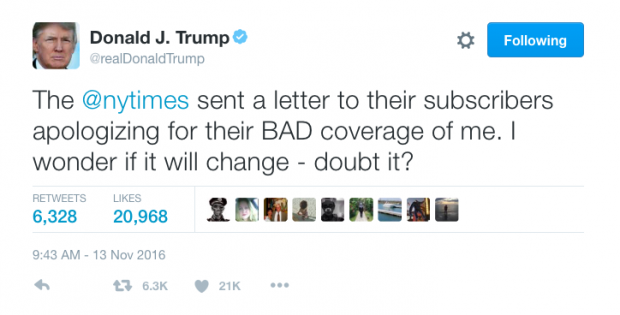