Ex-show host Montel Williams might be licking his wounds right about now.

Nothing about the 2016 presidential election reflected his political wishes.

Montel was initially a strong John Kasich supporter. But when Trump wiped Kasich out in the primary, he had a tough decision to make: Would he remain a #NeverTrumper or would he stray and back Hillary Clinton?

He chose Clinton. But she didn’t choose him.

According to emails released by DC Leaks, the Clinton campaign wanted nothing to do with Montel because of his longtime involvement with peddling payday loans.

The bottom line: They were pleased to get his endorsement, but wanted nothing to do with him publicly.

In fact, he insists on it.

Ann O’Leary, a senior policy adviser for Clinton, wrote, “Marc Benioff of Salesforce just forwarded me a note from Montel Williams saying he is ready to endorse Hillary if someone would call him back. Marc wants me to call him. Any reason for me not to be in touch with him? He is a Republican, as you probably know, but it [sic] ready to be on our side.”

Dach wrote, “Karuna, can you run Montel Williams, as you can see he may be ready to endorse. He will likely do it, if he does it, on his own platforms so we have less concern. The things I know about like association with payday lending are ok, but will be good to know all of the issues.”

Clinton aide Karuna Seshasai put the kabash on Montel in this email response:

“The payday lending association is actually a hard no and a big issue for us. We’ve stayed away from engaging/connecting with Montel in any way and it’s an industry that is a hard no for us in the finance world as well. We don’t let folks raise for us and we haven’t taken money. It’s a significant policy concern. If he wants to endorse, great, but we should not lift it up or engage.”

Adrienne Elrod made it clear to all that Montel was a big fat no: “FYI – Montel Williams will be announcing his endorsement of us on Wed. We are not using him as a surrogate b/c of vetting issues, but flagging since he in the past has traditionally been a Republican.”

Jonathan Franks, Montel’s top political aide (eye roll — yes, he really has one of these), excitedly told the campaign that Montel was appearing on MSNBC’s “Hardball” and would be releasing an op-ed in favor of Clinton and against Trump.

Franks: “He’s booked on Hardball on Wed to discuss this. The op-ed will go live as they go on the air!

The headline of the op-ed: “Donald Trump Represents a Clear and Present Danger: I Can’t Be with Him”

Always a press whore, Montel is all about the TV hits except when it’s Fox News’ Bill O’Reilly — he walked off the Fox News set at the Republican National Convention in Cleveland and never looked back.

As an ex-veteran, he cares about vets, or at least purports to on his favorite medium: Twitter.

The Mirror reached out to Montel’s spokesman Jonathan Franks for a comment. “No comment on that which I haven’t actually seen,” he replied when I sent him quotes about his boss from the leaked emails.

I sent him screenshots of two emails, such as the one below.

Eventually he replied, “We always assumed this would be the case. We never expected their love, we didn’t do it to garner favor with the Clintons – this was about stopping Trump and only stopping Trump. That said I would note some irony presuming I’m correctly recalling six figures in speaking fees from private prison companies?”

When I asked if Montel still condones payday loans, Franks replied, “Look forward to your story.”

Then he tweeted this: 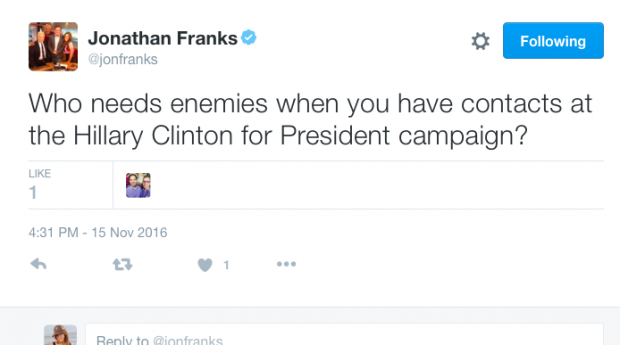 Memo to Montel: Want to get calls returned from so-called important people in politics?