Keith Olbermann. Wow. There’s a blast from the past, huh?

That name might not be familiar to younger readers. So, to recap the last 12 years or so: Keith Olbermann is a former sportscaster who decided he was actually a political commentator like everybody else, and for a while he was able to maintain a modest following by bellowing at George W. Bush to resign. That was a long time ago. These days he’s remembered, if he’s remembered at all, as the guy who made a point of alienating anybody and everybody who ever cut him a check.

To his credit, he did manage to ingratiate himself onto ESPN. Again. Before they fired him. Again.

Having run out of broadcast outlets to piss off, Keith is now working at GQ.com. “GQ” is another outdated reference, I guess. It stands for a magazine called Gentlemen’s Quarterly. Back in the old days, GQ was the one your dad brought home when he wanted to look at boobs, but your mom wouldn’t let him keep Playboys in the house. Now, GQ and Olby are doing… this. 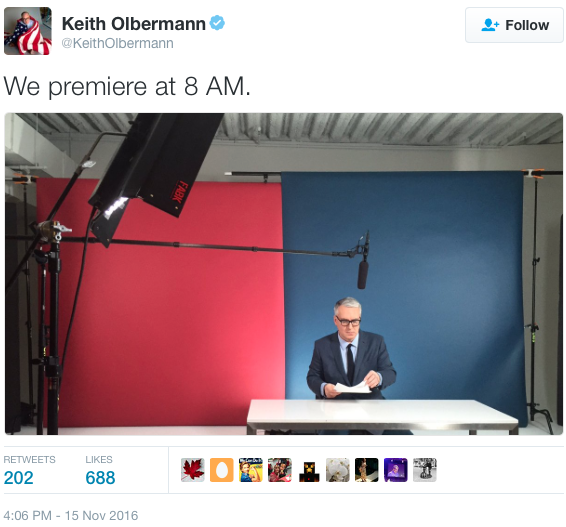 Looks like he’s doing some sort of podcast? Clearly, they’re starting small. Keith used to have his own cable-news show, and now he’s got an Ikea table in the GQ break room.

It would be a mistake, though, to dismiss the man because he’s clearly broke. After all, that’s what got Trump elected! So let’s listen to what Keith Olbermann has got to yell:

#TheResistanceGQ Vol.1 How to Resist? Start by recognizing we’ve already given this Trump a chance and he blew it. pic.twitter.com/mskuD6fKJO

Such is the singular nature of Keith Olbermann’s talent that he can make a mere six-minute podcast feel like an entire hour. It’s not too late for him to change careers and really make a difference in the world as Charlie Brown’s teacher.

But yeah, okay. Resist! Keith has already been leading the way. He’s so committed to the cause that he moved out of the Trump Palace condo he can’t afford anymore. That’s dedication.

There are plenty of legitimate reasons to slam Donald Trump, but clearly, none of them are as much fun as screaming about racism and sexism and so forth. It worked great for eight years, so why should Olby and his lil’ pals switch things up now that they’ve alienated everybody?

Poor Keith. In the early days of the Daily Caller, Tucker and Neil bought KeithOlbermann.com as a joke. They did it mainly to annoy Keith, which worked wonderfully. But now, maintaining that URL seems like kicking the guy when he’s down. Kinda pointless and mean.

Then again, so is Keith!

Here’s wishing Olby the best of luck with his podcast, until he inevitably destroys his relationship with yet another employer. As always, our offer is open: the Daily Caller needs interns.

Let’s close things out with the only good Olbermann impression anybody has ever bothered to do, by a comedian named Michael Terry. He recorded the following bit back in 2008 (hence the Hoobastank reference) as part of an audition for SNL. Clearly there was and is no market for Olby impressions, but this guy did a great job. And he was right about Jared!

P.S. At times like this, the memories just keep flooding back. On behalf of us all, Keith: For this relief, much thanks.