Daily Mail columnist Piers Morgan is making no bones about his career aspirations.

CNN’s former gun czar wants to be President-elect Donald Trump‘s press secretary. In a gossip item in The Spectator, Morgan served as Trump’s “main cheerleader” during the election. The UK pub said Morgan blabbed about being “keen on” being Trump’s flack.

“He bragged at our summer party that he would be Press Secretary in a Trump administration,” a London source told The Mirror.

Morgan had what was described as a Trump love-in.

The source explained, “He played it quite carefully; berating Ann Coulter for virtue points over the Muslim ban, then as he realized Trump (who he knows from ‘Celebrity Apprentice’) might win he suddenly became weirdly pro Trump.”

On Thursday, Morgan had a talk with Trump.

What that really means remains a mystery.

(No doubt New Jersey Gov. Chris Christie would take the job at this point.) 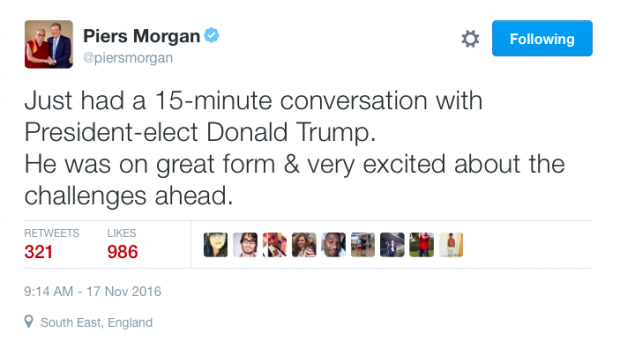 Morgan is a volatile figure.

In April, 2014, CNN fired him after getting in countless TV fights over gun control. He verbally lambasted anyone who supported gun rights.

As usual, venomous hate blew in Morgan’s direction after his morning tweet about chatting with Trump.

Responses included everything from “Did you swallow?” to “Journalism isn’t supposed to be fawning over the powerful. That is kind of the opposite of what it’s supposed to be.”

My personal favorite: “Shut your grovelling mouth, you snake.”

If all that wasn’t enough of a reaction, there was also a GIF of a dog humping a cow.