A Marxist, a Venezuelan diplomat and an illegal alien headlined a meeting of organizers of the Trump resistance as they announced their plan to shut down Chicago on Saturday and Washington, D.C. on Inauguration Day.

The Chicago branch of Act Now to Stop War and End Racism (ANSWER) met in Chicago’s northwest side neighborhood of Albany Park to plot their next move in their resistance of the Trump presidency.

Chicago ANSWER was one of the radical leftist groups that helped to organize anti-Trump protests when his campaign tried to hold a rally in March; that rally was canceled after protesters clashed with attendees.

Since holding those rallies, the group has announced “mass marches” on Inauguration Day in Washington and another one in Chicago on Saturday; the group hopes to “shut the streets down” at both rallies.

On Nov. 15, the group held a meeting to plot its next move in its ongoing resistance of the Trump in a space normally operated by the Mexican Solidarity Network, a less well-known group in the mold of La Raza.

CHICAGO ANSWER organizers, Stephanie and Mika, co-chaired the evening and Mika said he was also an organizer with the Party for Socialist and Liberation, a radical Marxist group and a frequent partner of ANSWER.

Mika fired up the crowd.

“What do want?” he yelled at the crowd.

“Justice,” the crowd roared back.

“When do we want it,” he screamed again.

“Now,” the crowd roared even louder.

“People can and must be organized in a deepening resistance,” Stephanie said. “As united as possible, as militant as possible.”

She also said she was willing to “work with anyone to resist this administration.”

Stephanie said Hillary Clinton used “sexist fear” to get elected but was still “fighting the right wing by any means necessary.

Jesús Rodríguez-Espinoza is the Counsel General for the Venezuelan consulate in Chicago and while the rest of the speakers accused Trump of the normal litany of grievances — that he’s a racist, homophobe, misogynist and charlatan — Rodriguez said his diplomatic position forbade him from weighing in on Trump.

“Because of my diplomatic position, I’m going to be very careful about what I’m going to say tonight,” Rodriguez-Espinoza said.

“Before I was the Counsel General in Chicago, I was a regular citizen in Venezuela just like you, in 2002, was moved in my basement because of the attack against Hugo Chavez. Because of that I started getting involved in politics.

Rodriguez-Espinoza said he became a supporter of Chavez after that. 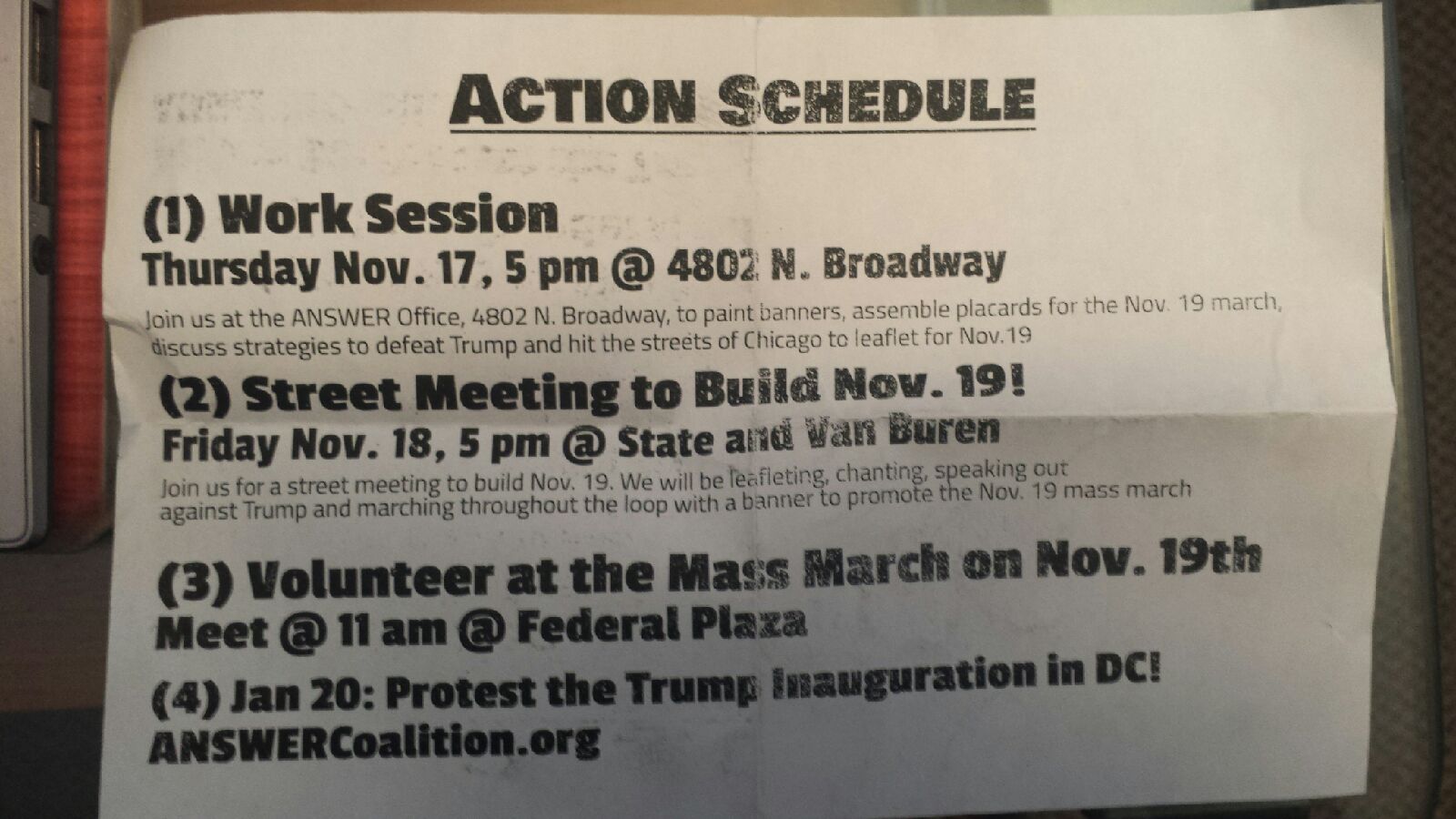 Rodriquez-Espinoza also claimed the current economic and humanitarian crisis in Venezuela is over-blown. “All the humanitarian crisis that you hear in the media most of that is an exaggeration. The only crisis we face is destabilization in Venezuelan oil. I’m not saying everything is perfect; I’m just saying it’s overmagnified because it’s in the interest of the most powerful countries in the world to get rid of the progressive government in Venezuela.

According to a June Guardian story, Venezuela has an economic crisis where Gross Domestic Product is contracting by 8 percent, unemployment was at 17 percent, and the inflation rate was at 482 percent.

“When I came to the United States I adopted this country as my only home. I was so little,” Said Holly, a Morton College — a community college in the south suburbs — student who said she was part of Obama’s executive amnesty program the Deferred Action Childhood Arrivals (DACA). “My children they’re all scared thinking they’ll go back to Mexico even though they are citizens. The only thing I can tell them is nothing is going to happen, but inside I have that fear. I don’t know what he (Trump) can do to me since I’m in the DACA program.”

The “mass march” on Saturday is scheduled for 12 p.m. local time in downtown Chicago in front of the Federal Plaza.

No location has been determined yet for the “mass march” on inauguration day.