During Trump’s campaign for the presidency, he railed against the Iraq war. “The War in Iraq we spent $2 trillion, thousands of lives, we don’t even have it. Iran is taking over Iraq with the second largest oil reserves in the world, obviously it was a mistake. George Bush made a mistake,” the president-elect said during a February debate.

Paul has made a career partly out of attacking policies that championed the Iraq war, but the libertarian does not think that Trump’s victory marked a defeat for neoconservatives. “He’s very friendly with a lot of them right now, he’s talking to them,” Paul said. “We don’t have a final answer, we have to wait to see who get’s appointed.”

He added, “He doesn’t talk about blowback and coming out of these countries. He has a better policy with Russia but I think he still is talking with the neoconservatives.”

Paul pointed to reports that Rudy Giuliani might be named secretary of state as an example of this.

The former congressman later said, “I don’t how anybody can say they know what is going to happen,” with regards to the Trump administration’s policies overseas.

“All we need is a false flag and an accident and everybody will be for teaching them a lesson,” Paul added about the potential to intervene in the Middle East. 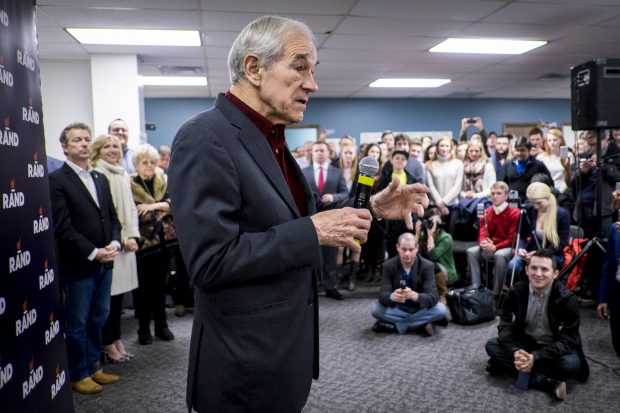 DES MOINES, IA – FEBRUARY 1: Former Congressman Ron Paul introduces his son, Senator Rand Paul (R-TX) during a caucus day rally at the Des Moines campaign headquarters on February 1, 2016 in Des Moines, Iowa. The Presidential hopeful was accompanied by his wife, Kelly, mother, Carol Wells and his father, former Congressman Ron Paul. Pauls were there to thank all the staff and volunteers for all their hard work in Iowa. (Photo by Pete Marovich/Getty Images)

The phrase “false flag” describes a covert operation undertaken by a nation or group that is meant to deceive and place the blame on another organization or nation for the potential purpose of providing a context for war. In the early 1960s, U.S military advisers reportedly drafted a plan that said, “we could blow up a U.S. ship in Guantanamo Bay and blame Cuba.”

TheDC asked Paul if he thinks the U.S government would engage in a false flag operation to get the country involved in a war overseas. “The neocons always talked about it before 9/11 they kept saying, ‘we aren’t going to get our program in until we have a Pearl Harbor event,'” the former congressman replied. “I don’t think there’s proof that they did it.”

He also said, “I think other countries could use false flags.”

Trump has previously criticized the Federal Reserve and said the central bank has created a “false economy.” Paul is a lifelong critic of the Fed, and TheDC asked him if he has hopes that the federal reserve under Trump will be better run.

“I’ll be a believer when I see it, not because he might not want to, but you know the deep state is very very powerful and they have a lot of control,” Paul replied. “That is one of my big issues about how shadow government is so powerful in all administrations. I would say they should be talking about the CIA.”

The former congressman also spoke about a “shadow government” when asked what he thinks about President Obama’s foreign policy.

Paul said that Obama has had a mixed record between not intervening in Syria and wanting Assad to step down by supporting rebels. “Obama probably was much more attune to a different foreign policy of less aggression but why then does he do it?” Paul said. “I think there’s the shadow government, the military-industrial complex, the CIA, and all the things that can be done because they just melt away and they do exactly what the establishment says.”