So he did something he hasn’t done in 12 years — he smoked a cigarette.

President-elect Donald Trump can’t be fully blamed. But then again, he likely had something to do with why Howe picked up again. Also a filmmaker, the journalist recently released his crowdfunded documentary on Trump. It’s called “The Sociopath.” Which tells you just about everything you need to know about what Howe thinks of him.

During the campaign, Howe called Trump a “pathological sociopath.” He also said having Hillary Clinton in office is better than “having a maniac” in the Oval Office.

But the weird thing is, Howe didn’t regret his smoke. At least not at first.

Rather, he enjoyed the hell out of it. 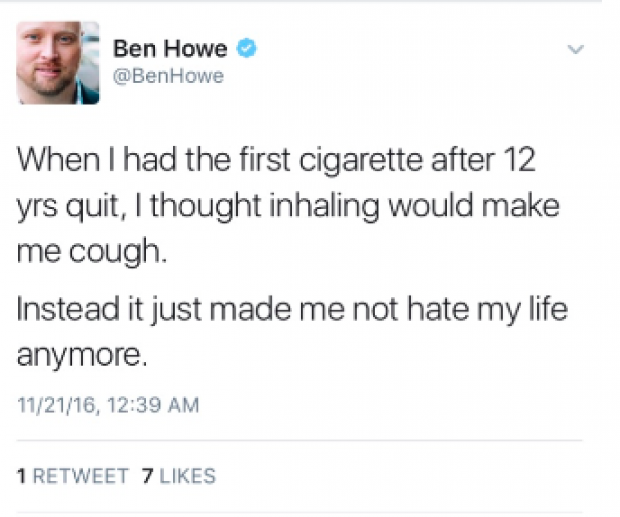 When Twitter pals tried to comfort him over the weekend, he assured them he had quit again. One online friend suggested he take up a musical instrument. Another encouraged him by saying he quit 13 years ago.

But another had a seriously pessimistic view about resuming the habit again even for just one cigarette: “I do research in drug addiction (namely nicotine and meth), unfortunately it never goes away. Brain is already wired to love it.”

Howe remarked darkly, “Fair warning: Even 12 years later it only took one cigarette to be old friends.”

On Monday morning, he wrote, “In light of the awfulness of this election people should’ve responded by reevaluating how they treat opposition. Instead, things are worse.”

UPDATE: Howe returned an email message from The Mirror. He explained how his cigarette slip went down: “I was just hanging out with old friends who all still smoked. One drink led to another and before i knew it ‘hey let me take a drag!’ The rest is history. I will say that if there were any good reasons to smoke and then die a horrible painful death riddled with lung cancer, Trump’s election would be one of them.”