On Saturday I broke my no approaching Twitter during the weekend “rule” when CNN “UnReliable Sources” host Brian Stelter and Daily Mail‘s U.S. Editor David Martosko began ridiculing me and The Daily Caller. To be clear, Martosko said my work should be taken with a “quarry of salt” and Stelter declared that The Daily Caller should not be trusted as a real news source.

I told Martosko to shove his “quarry of salt” up his ass. I asked Stelter for examples.

But let’s go back to where this all began.

Which was with Stelter reacting to a tweet by President-elect Donald Trump.

“‘Harassed’ by ‘the cast of Hamilton.’ ‘This should not happen!’ THIS is why people fear that Trump will trample on free speech,” Stelter wrote.

Martosko, who’s auditioning for Trump’s press secretary and makes it his business to instruct and scold his fellow reporters about reporting on the newly elected president, replied, “Objectively, it sounds so far like he’s responding to speech with more speech. Isn’t that the ideal?”

Stelter shot back, “He said ‘this should not happen,’ and we both know what that suggests.”

At this point, a third party entered the conversation with a link to a story I wrote:”Is CNN’s Brian Stelter Vying For A Job In Hillary’s Press Office?” I was making the point that Stelter was doing an AWFUL lot of defending Clinton as of late, which he was.

Stelter lashed out at The Daily Caller, writing, “If you trust what the daily caller [sic] writes, then I don’t know what to say. the [sic] site routinely reports falsehoods about me.”

He refused to offer examples.

Martosko tried to soothe Stelter, writing, “That’s their gossip columnist. Take with a quarry of salt.” (This is rich coming from a Daily Mail reporter.)

Over Twitter’s private direct messaging system, Stelter wrote me to say this: “I didn’t name you in my tweet. And I didn’t seek to pick a fight. I chose a long time ago not to challenge the factual inaccuracies that I see in DC items.”

I said making a statement like that was him clearly looking for a fight.

Reporting falsehoods is a strong accusation — outside of plagiarism, the strongest one can make. For CNN’s lead media reporter to throw that out there borders on libel if not hits it head on. Martosko, by the way, used to be executive editor of The Daily Caller but he felt no need to challenge his Saturday night Twitter pal.

Thankfully he worked there before my time as the idea of working under such an imbecile makes me shudder.

Tuesday night arrived and it was time for Stelter to cobble together his nightly preachfest newsletter that is full of little nuggets that poop themselves out of Stelter’s head. Trust me. It’s simply fascinating.

His eighth item was that a Politico editor had been fired — a story first broken by The Daily Caller, that publication he said shouldn’t be trusted for accuracy, remember?

This is bullshit people.

Stelter is disingenuous. Byers, too, in this instance.

When I wrote my coworker Jonah to tell him it was a great story, he waved off my compliment — something Stelter knows little about. (And Martosko, too, for that matter. The guy is salivating at the prospect of being Trump’s press secretary. If Trump had boots he’d willingly lick them.)

Stelter thought The Daily Caller‘s story was worthy enough to make his newsletter. He just felt no reason to disclose that CNN’s media team had absolutely nothing to do with breaking it.

He’d also have to explain why it appears CNN basically stole the story.

Five graphs in after a headline and deck to cite the source is unacceptable. 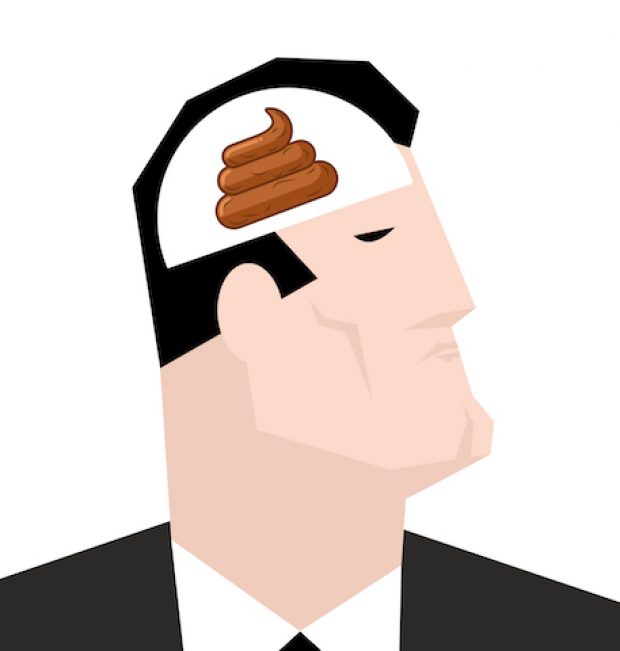 Stelter seems to have all these opinions about the presidential race and journalism and Donald Trump. He can’t dump them out of his mouth fast enough. CNN’s Don Lemon ruins his show whenever he has him on.

Sure — admittedly, I have a dog in this fight. This is my workplace.

And let me be clear: I am not calling for Stelter to apologize to The Daily Caller. That’s a pointless, meaningless, mission.

But I am putting him on notice: Stelter needs to get back to the basics of the craft, which involve less of his annoying lecturing on TV, less of him if you know what I mean, less ass kissing his boss Jeff Zucker and a lot more honesty in his reporting, be it on TV, in his dumbass nightly newsletter or on Twitter.