Black Friday shoppers were caught fighting over towels just one day after celebrating being thankful for what they already have. 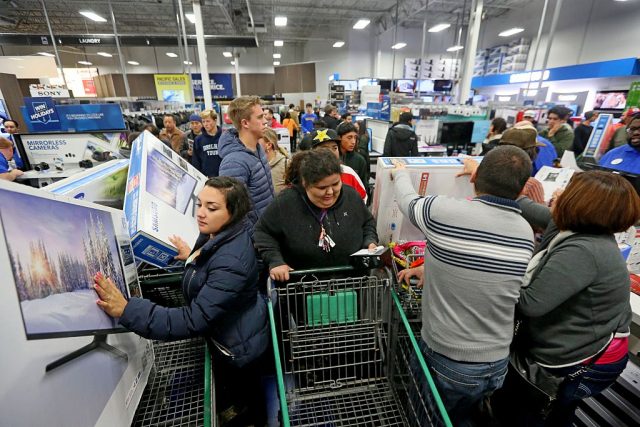 In a cellphone video taken at a Walmart store in Georgia, a group of women and one man are seen furiously grabbing as many towels as they can from the display and stuffing them into their shopping carts.

In another, shoppers at a Walmart in Houston shove each other out of the way for a $99 battery-operated convertible car for children.

People who stayed home from the shopping madness said they were wishing for a fight on Twitter.

I’m thinking about going to Wal-Mart for black Friday but I don’t plan on buying anything. I’m looking for a fight.

First time in 5 years I didn’t fight someone at Walmart on Black Friday. #smh

Can’t wait for the ” 2 guys fight in walmart on black friday over washing machine” videos to come out.

Wish I was in America for black Friday, just to fight with someone in Walmart

Come on already! I want my #BlackFriday fight videos. I need that all out brawl for that 27 inch Vizio TV at Wal-Mart.

I think I’ll take a nap then go out to Walmart. Just to see crazy people fight over merch #BlackFriday

Only a few hours until the annual #blackfriday “fight over shit videos” from Walmart will be posted.

it is one in the morning & my friends & i are sitting at walmart laughing at people fight over things.

this is my life.

The best part of Black Friday is we can go back to watching people fight at Walmart and not on Facebook.