A staff writer for left-wing website Mic.com uncritically accepted a prankster’s account of a fictitious racially-charged interaction with a Trump supporter, later spreading the false story on Twitter while dismissing those skeptical of the story’s veracity.

The story begins with a tweet from Mic staff writer Sarah Harvard, requesting stories of Trump-inspired attacks on non-whites, Muslims or LGBTQ people. “If you’re a person of color, Muslim, and/or LGBTQ, and have been attacked by a Trump supporter. DM/email me,” she wrote, providing her email for people to contact her. Harvard promised a “Safe space” for any alleged victims. 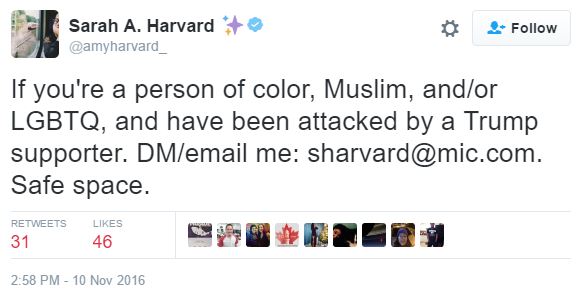 That tweet caught the attention of right-of-center YouTuber Matt Christiansen, who decided to test what — if any — scrutiny the journalist would apply to stories of Trump-inspired attacks. Christiansen and a friend cooked up a fictitious story of a white male who threatened a Native American women because he thought she was Mexican and later justified his rudeness by saying “white is right.”

Using a fake email and the name “Laurel Nelson,” the pranksters emailed Harvard their story with the subject line “aggressive Trump supporter.” The Daily Caller was provided with copies of the email exchanges between Harvard and “Laurel Nelson.”

“I was leaving Starbucks when I got bumped at the door by a trump supporter. I ended spilling latte on myself but he gave me the glare like I did wrong. I said ‘you can at least say sorry’ and he replied ‘just walk away and be lucky that coffee is the only thing of yours that spills. You shouldn’t even be in this country, and you wont be for long’ [sic]” the non-existent Laurel Nelson said. “He must have thought I was Mexican because I am dark, but I am Native American. I told him so and that we were actually here first. His reply was ‘doesn’t mater. white is right’ and pushed by me [sic].” 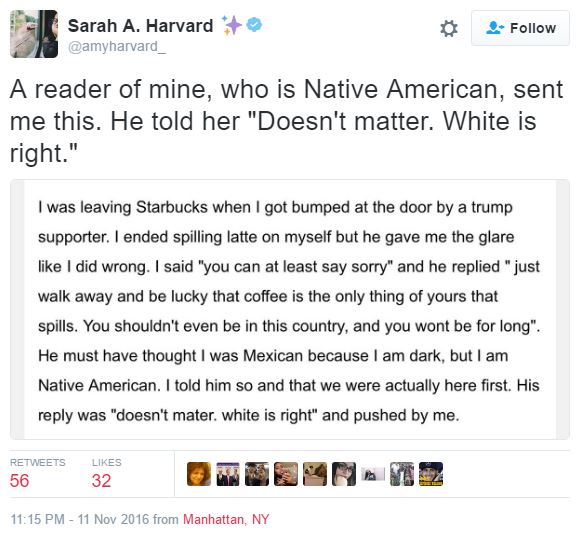 Within the hour, Harvard emailed back, asking for permission to tweet out the story, promising not to reveal “Nelson’s” name. She later did exactly that.

At no point did Harvard — who is on record calling Trump supporters the “American Taliban” — express any doubt that a random stranger on the Internet might not be telling her the truth. Neither Harvard nor Mic co-founder Chris Altcheck returned TheDC’s request for comment by press time.

The next day, “Nelson” reached out to Harvard to express doubt that the “rude white male” was actually a Trump supporter, writing, “I was talking to a friend about this incident and she brought up a good point. I don’t have any way to confirm that the guy in my story was a Trump supporter. I assumed he was because he was a rude white male, but there is no way to know who he really voted for.”

Harvard nevertheless let the tweet — which fit her pre-conceived narrative — stand without any caveat.

In fact, when a reader challenged the fantastical story’s veracity, Harvard responded by mocking the person’s “logic.”