The words “artificial intelligence” likely conjure up visions of dystopian sci-fi worlds for many investors. Yet many tech companies have already developed advanced AI platforms — indicating that the “future” isn’t as far off as you might think. 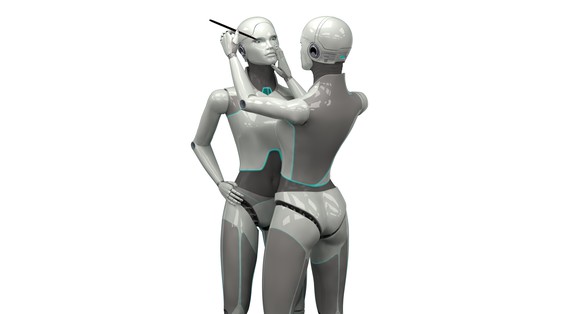 You’ve likely already flirted with this technology with Siri or Echo, and you’re probably aware that your personal information is constantly being analyzed in the cloud. But how do these pieces actually fit together, and which companies are well-poised to profit from smarter machines?

To figure that out, we should sort these top companies by three main categories — the advertisers, the SaaS players, and the chipmakers.

Alphabet’s (NASDAQ: GOOG) (NASDAQ: GOOGL) Google and Facebook (NASDAQ: FB) both use artificial intelligence to recognize images and analyze users’ data to deliver better targeted ads. Google’s AI takes a users’ search history, location data, and other information to craft ads, and Facebook does the same with its users’ social connections and interactions.

Google has acquired about a dozen AI start-ups over the past five years. These purchases include deep learning and neural network start-up DNNresearch, which enabled big upgrades to its image search feature, and British AI firm DeepMind, which recently used its program to beat a human world champion at Go. Earlier this year, it acquired visual search start-up Moodstock and bot platform Api.ai.

AI and the cloud are joined at the hip, because AI platforms would be useless if they couldn’t process a steady stream of cloud-based data. That’s why cloud-based SaaS (software as a service) leaders Microsoft (NASDAQ: MSFT) and Salesforce (NYSE: CRM) are both investing heavily in AI.

Microsoft’s SaaS products — Office 365, Skype, and Dynamics CRM (customer relationship management) — all feed data back to Azure, its IaaS (infrastructure as a service) and PaaS (platform as a service) ecosystem. To process all that data — along with search queries from Bing, Cortana, and other apps — Microsoft formed a massive new AI division called the AI and Research Group in September. It also acquired AI companies like Netbreeze, Equivio, and Genee over the past five years.

Salesforce, the market leader in cloud-based CRM software, is also investing heavily in AI tools to present companies with better analytics to improve customer relationships. It entered the market last year with its acquisition of Tempo AI, and acquired MetaMind and open-source machine learning server PredictionIO earlier this year. In September, Salesforce introduced Einstein, which adds AI capabilities into its CRM products and lets developers create AI-powered apps which “get smarter with every interaction.”

Nvidia also offers an automotive “supercomputer” called Drive PX. The platform, which is powered by its Tegra CPUs, helps automakers create driverless vehicles which can “see” and respond to obstacles.

Mobileye is the market leader in ADAS (advanced driver assistance systems), which use a combination of cameras, radars, and computer vision chips to help vehicles avoid collisions. About 90% of the world’s top automakers use Mobileye systems, putting the chipmaker in a solid position to expand into autonomous vehicles. The company recently partnered with Intel and BMW to launch a fully driverless platform by 2021.

The AI market is a vast one, and plenty of other companies — like Amazon, IBM, and Nuance — are also nurturing the growth of intelligent machines. But for investors just getting acquainted with the AI market, examining how top online advertisers, cloud service providers, and hardware makers are investing in AI can give you a much clearer understanding of this complex market.

10 stocks we like better than Salesforce.com
When investing geniuses David and Tom Gardner have a stock tip, it can pay to listen. After all, the newsletter they have run for over a decade, Motley Fool Stock Advisor, has tripled the market.*

David and Tom just revealed what they believe are the 10 best stocks for investors to buy right now… and Salesforce.com wasn’t one of them! That’s right — they think these 10 stocks are even better buys.