Suspected Ohio State University attack Abdul Artan reportedly complained to the campus newspaper in August that the campus did not have enough prayer rooms.

Artan’s full name is Abdul Razak Ali Artan, a man who emigrated to the United States in 2014, NBCNews reports. Artan was a refugee who’s family left Somalia in 2007, spent seven years in Pakistan, and became legal permanent residents of the U.S. in 2014.

Artan was profiled in an Aug. 25 segment titled, “Humans of Ohio State” where he lamented, “This place is huge, I don’t even know where to pray.” Artan said he wanted to pray in the open but was scared because of recent media coverage. 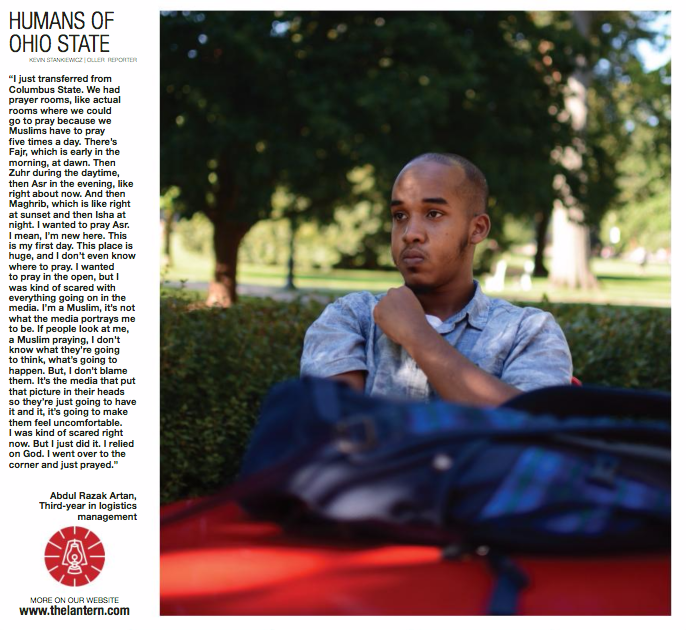 “If people look at me a Muslim praying, I don’t know what they’re going to think, whats going to happen.” Artan then railed against the media saying, “its the media that puts that picture in their heads so they’re going to have it and it, it’s going to make them feel uncomfortable.” Artan eventually decided to pray in a corner on his first day at the university.

“We have to consider that it is” a terrorist attack, Columbus Ohio Police Chief Kim Jacobs told reporters Monday. Jacobs elaborated that police “engaged the suspect and eliminated the threat.” Reports indicate he allegedly swerved his car onto the curb striking students, before attacking other students with a butcher knife.