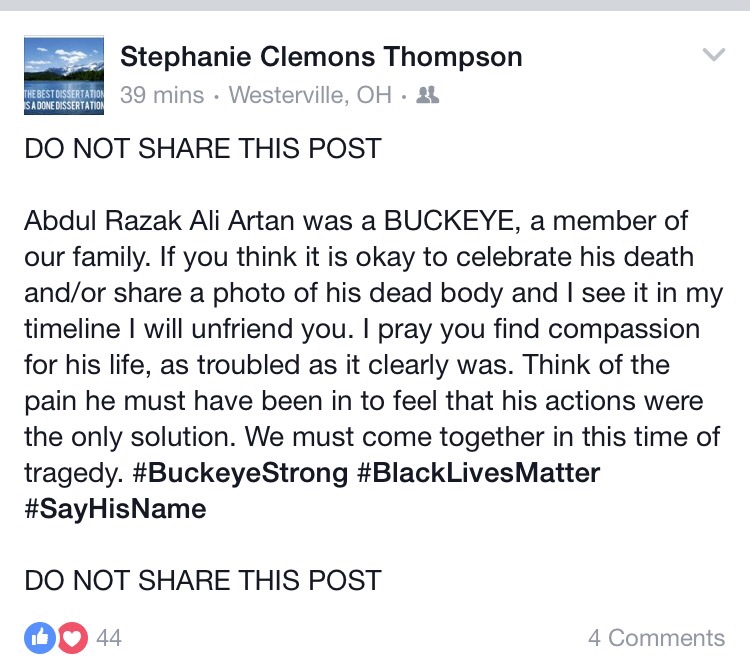 The Daily Caller News Foundation was not able to independently verify the authenticity of the post, and Clemons was unavailable for comment at press time.

Clemons apparently repeated urging for her friends not to share the Facebook post, suggesting she was aware of the controversial nature of her language. “We are formally asking for the termination of Stephanie Clemons Thompson’s employment at OSU,” a petition created Tuesday by Ohio State University students declares.

Artan emigrated to the U.S. in 2014, NBCNews reports. Artan was a refugee whose family left Somalia in 2007, spent seven years in Pakistan, and became legal permanent residents of the U.S. in 2014.

Before the attack, Artan reportedly posted on Facebook, “I can’t take it anymore. America! Stop interfering with other countries, especially the Muslim Ummah. We are not weak. We are not weak, remember that,” according to ABCNews. “We will not let you sleep unless you give peace to the Muslims,” he declared.

[dcquiz] Artan was profiled in an Aug. 25 segment titled, “Humans of Ohio State” where he lamented, “This place is huge, I don’t even know where to pray.” Artan said he wanted to pray in the open but was scared because of recent media coverage.

“We have to consider that it is” a terrorist attack, Columbus Ohio Police Chief Kim Jacobs told reporters Monday. Jacobs elaborated that police “engaged the suspect and eliminated the threat.” Reports indicate he allegedly swerved his car onto the curb striking students, before attacking other students with a butcher knife.