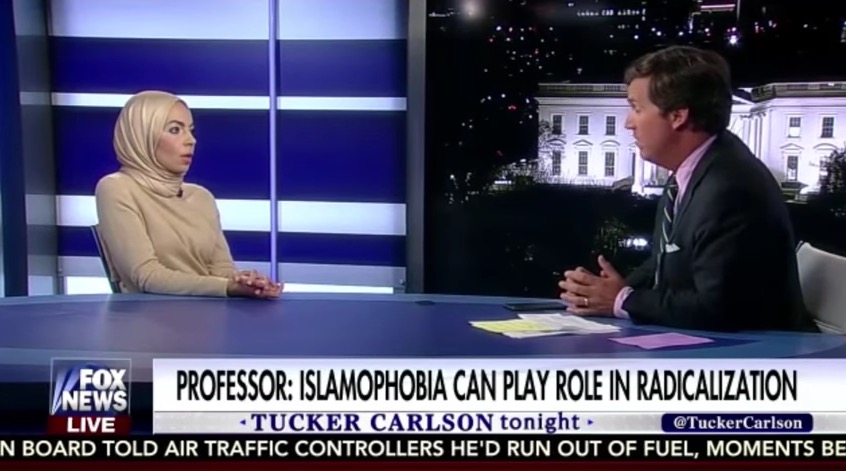 Abdelkader stated that “anti-Muslim bigotry and discrimination — what we commonly refer to as Islamophobia — can contribute to a sense of what they term as cultural homelessness.”

She insinuated that cultural homelessness radicalizes some Muslim immigrants to the United States — like Ohio State University attacker Adbul Artan — but host Tucker Carlson quickly began to poke holes in her argument.

“You don’t address problems within the religion or the Islamic community,” Carlson — co-founder of the Daily Caller — countered. “You turn it instead back on America and the West by saying our intolerance causes this.”

“This looks a lot like victim blaming,” he added.

“You’ve had an awful lot of Americans killed and injured by Islamic terror in the last eight years — almost 100, more than 350 injured — and you’re basically saying that happened because America is not hospitable enough to Muslims, which is not fair.” (RELATED: ‘Tucker Carlson Tonight’ Gives Fox News Historic Ratings Bump)

Abdelkader — after clarifying that “there’s never justification for a tragedy such as this one — responded to Carlson’s point by citing that reserach from Stanford University and the FBI, which she claimed showed “there’s actually a greater threat of terrorism from white supremacist groups and right-wing extremists than there are from individuals who self-identify as Muslim.”

For the next four minutes, Carlson grilled Abdelkader for “making a point that is unsupportable.”

“I get your defensiveness. I understand that good, decent Muslims feel they are under attack or portrayed as terrorists. I understand that, but at some point you have to say this really is a real problem, and it’s discrediting all of us, and until we take it seriously it’s going to continue, no?”