Washed up talk show host Montel Williams may have a slim physique. But these days he has all the grace of a hippo-POT-amus. The infamous pot-smoking Twitter fiend and veterans rights activist went on a social media tear Monday and told a female journalist how to kill herself.

Williams did not delete the tweet. Even so, many captured it by screenshot just in case.

A.P. Dillon is executive editor of American Lens. She has contributed to Breitbart News. 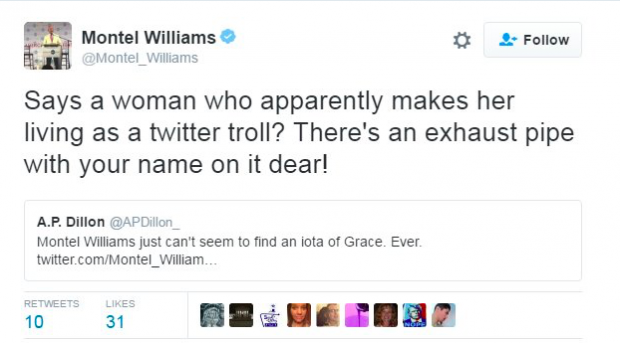 Williams is a presumably a grown man. He dug in his heels about the whole thing and said there was no need for anyone to screenshot his tweet because he won’t be getting rid of it.

Williams brushed off her reaction with a sexist reply: “I do believe you read my tweet like the drama queen you are. But so be it.”

Many Twitter users and military vets also called him out for saying something so atrocious.

A “conservative” high school teacher criticized Williams saying, “Damn, Lieutenant, I thought better of you. That’s conduct unbecoming.” Williams quickly turned into a schoolmarm and replied, “That would be LCDR. If you are going to troll get it right.”

One follower suggested that some tweeters may be in a fragile mental state and Williams telling a woman to kill herself is beyond the pale of acceptable behavior.

Dillon, who lives in North Carolina, assured readers that she would do no such thing. “Good point,” she said. “I’m fine. I’d never do such a thing to my two young children.”

During the 2016 election Williams became especially vocal. After his first choice candidate, Ohio Gov. John Kasich, lost the GOP primary, Williams endorsed Hillary Clinton, who wouldn’t acknowledge his support because of his involvement with payday loans. He has long been vehemently anti-Donald Trump.

Montel and his crew tried to pass it off like they didn’t care, like they expected nothing more of Clinton. But the truth is, they wanted her to call him. Williams deeply wants to be recognized by important people in Washington.

His “political director” Jonathan Franks recently called me a “bitch” when I pushed for an answer on why Williams pushes payday loans on poor people, so I was reluctant to seek comment about this. He has also previously called me a “ho” and a drunk because isn’t that what all publicists do?

But what the hell?

I shot Franks an email and asked, “Why does Montel actively want A.P. Dillon to die? And why did he give her an idea of how she should off herself? Is he losing his marbles? If there is another side to this, I really do want to hear it.”

Williams’s asinine spokesman (who can’t spell) did not return my request by press time.

If he replies, I’ll bring his response to you as quickly as that becomes possible.