Heroin seizures at the southwest border have skyrocketed in recent years amid increased production in Mexico and smuggling shifts from air to land routes, according to the U.S. Drug Enforcement Administration (DEA).

The DEA’s annual National Drug Threat Assessment (NDTA), released Tuesday, reveals that heroin seizures at the border more than doubled from 2010 (1,016 kilograms) to 2015 (2,524 kilograms). The DEA credits both increased Mexican heroin smuggling efforts and law enforcement enhancements along the border for the higher apprehensions. 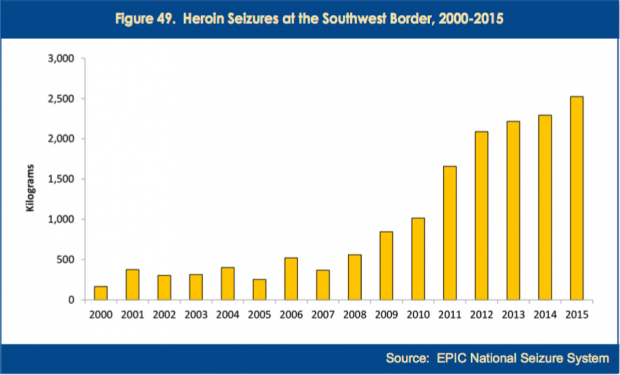 “Most of the heroin smuggled into the United States is brought overland across the Southwest Border (mostly Mexican heroin and some South American heroin) with lesser amounts transported by couriers on commercial airlines (South American, Southwest Asian, and Southeast Asian heroin),” the NDTA explains.

Smugglers’ shift away from air travel has been a significant contributing factor to the traffic at the border. In fiscal year 2008, 47 percent of Customs and Border Protection heroin seizures were made from air travel compared with 49 percent over land. By FY 2015, just 19 percent of heroin discoveries were from air sources and 81 percent on land, according to the NDTA.

“Since 2008, SWB heroin seizures have increased steadily, rising 352 percent from 559 kilograms in 2008 to 2,524 kilograms in 2015,” the report reads. “While part of this increase can be attributed to increased security on the SWB, commercial air routes were also subjected to heightened scrutiny after the 9/11 terror attacks.”

In recent years the DEA has documented an alarming increase in the use of heroin and prescription drugs. Deaths from heroin overdose more than tripled from 2010 to 2014, when 10,574 people in the U.S. died from a heroin overdoes.

“Heroin use and availability are likely to continue to increase in the near term,” the NDTA predicts. “Mexican traffickers are making a concerted effort to expand the U.S. heroin market and increase the amount of heroin transported to the United States. Increasing poppy cultivation and heroin production in Mexico, the primary source of heroin for the U.S. market, will allow Mexican traffickers to reliably supply heroin markets throughout the United States.”

The DEA says that it expects heroin overdose deaths to remain high “in the near term” as the sources causing them persist, namely “ready availability of high-purity, low-cost heroin and a large influx of new users.” The agency sounded a note of optimism that some of the overdose deaths could be reduced with increased access to naloxone, a drug that can combat the effects of an opioid overdose.

“Newly-approved nasal spray formulations and auto-injectors, combined with increased access for third-party carriers and law enforcement agencies, have expanded the presence of naloxone to its widest extent thus far,” the report reads.

1
Here's A List Of The Rich And Famous Caught In Photos With Ghislaine Maxwell
US
2
'She's Got The Gun On Me': White Woman Pulls Pistol On Black Family In Viral Video
US
3
Report: Trump Wants 'No More Of Jared's Woke S***'
Politics
4
Report: Feds Arrest Antifa 'Ringleader' Responsible For Coordinating Attack On Jackson Statue
US
5
The Senate Accidentally Passed Bill To Stop Paying Dead People
Politics