It’s Tuesday. So MSNBC’s Mika Brzezinski is calculating how many brownie points she can add to her Kiss Donald Trump‘s Ass ledger.

I do wonder how Willie Geist is feeling this week. Joe Scarborough and his work wife have brought home a new 175 (+ or -) pound baby boy in Bloomberg Politics‘ Mark Halperin, who they tout as the only other journalist (besides themselves) in the world who was brave enough to predict that Trump could win. No doubt their firstborn must be feeling pretty neglected.  But hang in there, Willie. You’re a blast of fresh air sandwiched between these braggarts and newfound Trump sycophants.

One has to really question the TV couple’s parenting skills.

Now they may owe the President elect. After all, this morning “Morning Joe” landed the Veep for an interview.

Oh it’s just so hard being the VP’s wife and bringing your kids on the road.

That was Brzezinski profoundly commiserating with VP Mike Pence‘s wife, Karen, about how hard it is to raise your children, live in a mansion, have a 24-7 Secret Service detail and be among the most powerful people in the world.

She even awkwardly joked about creating the term “Pence-ing” in mid-August, which she defined like this: “You’re schilling for your nominee even though deep inside you absolutely do not agree with anything says and he makes you sick but you don’t have the guts to say it because you’re afraid for your job and you don’t have the foresight to see that that’s ultimately going to hurt you in the long run.”

In recent weeks — after Trump called her “neurotic, crazy, dumb” and a “not very bright mess” — there has been a complete whiplash of change on “Morning Joe.” Scarborough has officially mended ties with Trump — he said his son’s accident eased whatever tension was between them. So has Brzezinski, Scarborough’s presumed girlfriend that Trump outed during his campaign. Once enamored by Hillary Clinton and the likes of Sen. Elizabeth Warren (D-Mass.), Brzezinski now calls Warren’s tone “shrill” and says, “I’m getting tired of this act.”

Politico media writer Hadas Gold published a story Monday about “Morning Joe’s” drastic sea change toward Trump. She wrote about how far their relationship has come since Trump called their show “low rated” and them “clowns.”

Brzezinski refused to comment for the piece. But Scarborough took the call.

When confronted about how much ass she’s kissing these days and how insufferable it is to hear the TV duo brag about themselves being the only journalists who believed in Trump’s triumph, Brzezinski  grows — how shall I put it? — shrill? Defensive? Disgustingly sexist?

CNN’s Dylan Byers recently reported that Brzezinski had met with Ivanka Trump at Trump Tower to possibly involve the President elect’s daughter in her “Know Your Value” campaign. Brzezinski publicly whacked Byers, telling him he had gotten his facts wrong — again.

Yeah, say hello to Brzezinski’s feminist mystique. Forget about her “Know Your Value” campaign. That benefited her paycheck. This new, more evolved host involves calling her female critics like me “cute” and “little” and “mean.” Dripping with sarcasm, she wrote on Twitter that I’ve been “so sweet” to her and Scarborough over the years. She also brought up my parents and said they must be proud of me. Like many parents, they are.

Sounding like a pre-teen she added, “Fun 2 be so mean right?”

I wasn’t aware that being a media reporter meant that I was supposed to be “sweet” to them or anyone. I foolishly thought I was supposed to cover them and be critical when they behave in a way that is completely grotesque to many of their viewers. Gold’s story on “Morning Joe” reported that CNN’s Chris Cuomo says Scarborough and Brzezinski are Trump’s “transition spokesmen.” Even “Keepin’ It 1600,” a podcast by ex-President Obama press aides, routinely refers to Scarborough as “Trump Spokesman Joe Scarborough.”

So here’s what went down.

Late last week, I finally unloaded some thoughts that had been building after I saw a MSNBC house ad in which Scarborough and his work wife were once again bragging about their 2016 presidential coverage. I even came across an absurd tweet by “Morning Joe” regular Nicolle Wallace congratulating them for being so smart about the election. Brzezinski retweeted her compliment and in a ridiculous humblebrag noted how much it meant to her.

When another media blogger, Johnny Dollar, reminded me that MSNBC’s slogan was “lean forward,” I remarked, “Yeah, lean forward over a toilet.”

Some 24 hours passed with no response. I forgot all about it.

That is, until Brzezinski let me have it. In four tweets she showed me how to completely forget my value. In the process, she showed me what her brand of “Knowing Your Value” really means — which is, the more you suck up, the further you get in life. Also: if you cover someone in the media, you’re not just writing about them, you’re “obsessed.” I don’t have a secret room stuffed with pictures of Scarborough and Brzezinski, but I have written about them, made fun of them and praised them. Probably the so-called “meanest” thing I ever did was when Scarborough floated the idea of running for president. I wondered who the first lady might be in a Scarborough White House and ran several pictures of Brzezinski with varying hairstyles. [RELATED: 18 Potential First Ladies For MSNBC’s Joe Scarborough]

Despite the scene in her book, Obsessed: America’s Food Addiction—and My Own, in which she scoops an entire jar of Nutella into her mouth with her fingers in a feverish middle of the night Ambien blackout, I never called her “neurotic” or “dumb” or “crazy.” But somehow she and Scarborough talk to that guy twice a week.

There’s no doubt about it — Nutella is delicious.

Here’s how she reacted to criticism about her boasting and newfound love for Trump. 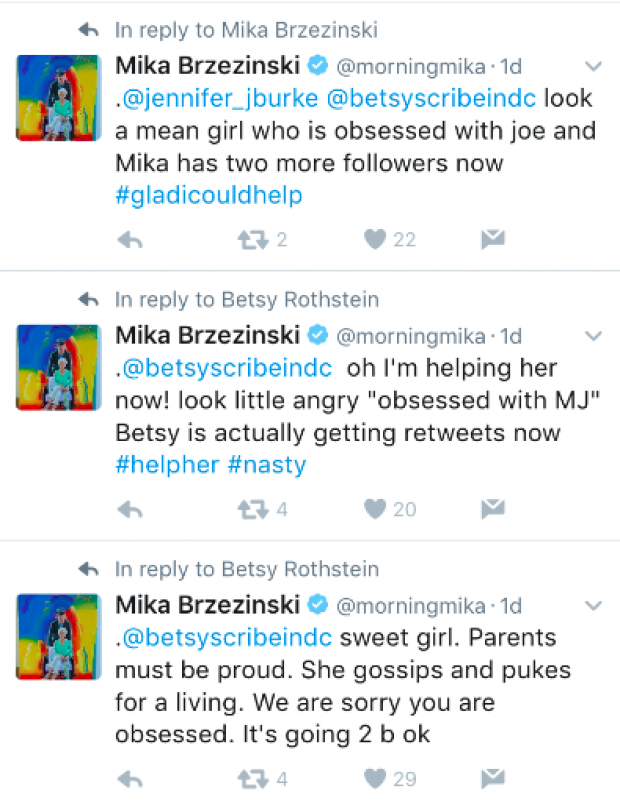 I actually do not puke for a living. But Brzezinski detailed her own experiences with bulimia and other eating disorders in her aforementioned memoir.

Scarborough, for his part, appears to be living in an alternate universe.

“We talk to Trump a few times a week and say the same thing to him on the phone that we say publicly on the show,” Scarborough told Politico‘s Gold. “We’re just as blunt in person as we are on TV, whether we happened to be critical on the show that particular day or not.”

Except these days the TV duo is hardly critical. How would they possibly gain access to Trump’s golden tower if they critiqued The Donald? So this “bluntness” Scarborough speaks of is absolute fiction.

In late August — just four short months ago —  Brzezinski was calling for a psychiatrist to diagnose whatever mental disorder Trump may have.

“Let’s stop pretending we’re dealing with someone who we can completely understand,” Brzezinski said. “And when you see someone who you think has problems, you know it. And there’s not anybody at this table who doesn’t think he has some sort of problem. Let’s ask the questions. Let’s do this at this point. Let’s set up someone and ask the … questions.”

She said she and Joe have been asked about Trump’s mental problems “hundreds” of times.

Oddly enough, I didn’t have to defend myself against Brzezinski’s rant.

Strangers on Twitter emerged in droves and, in a chorus of nastiness, came down hard against “Morning Joe” or “Morning Trump” as the show should now be called.

The comments have been pouring in for the past five days.

Brzezinski obviously won’t listen to me. But maybe she’ll listen to them.

Here’s a sampling of reaction to her Twitter remarks:

“Give Mika a break, tossing Donald and Joe’s salad at the same time is exhausting.”

“Mika you were better when you read the weather forecasts for Imus ,now you are a poor woman’s Fox news blonde.”

“Your father must be disappointed everyday.”

“Mika Im British, the whole darn world saw u kissin his arse. Sit down and suck it up. U did it, u own it.”

“Not sure you have any concept of how small and petty this makes you look. Maybe lay off Twitter for a while?”

“Glad we are not the only ones seeing this pattern of behavior. @Morning_Joe is losing it’s neutrality-SAD.”

“Mika has 2 girls! Yet happily normalizes & SELLS PussyGrabberElect’s crazy. With a giggle & a wink!”

“Mika what has happened to you? Why the bitterness? Why betraying women? DJT is s sexual predator.”

“After Trump’s twitter insults ignored by Mika. Someone finally got under her skin. I’ve tried, I’m jealous #morningjoe”

“We care because we watch the show and it’s frustrating…why do you care how we react to that tho.”

“Mika’s a transparent brown noser. Kudos for calling her out.”

“I also stopped watching! Can’t stand them for all the reasons mentioned above.”

“If they say, one more time, we predicated this back last summer within every block. Who they trying to convince?”

“Mika shouldn’t mention parents. Though she would make a great WalMart greeter.”