President Obama’s Labor Department announced last week that the national unemployment rate had fallen to 4.6%, its lowest level in more than nine years.   With “full employment” defined historically as 5% unemployment, this latest announcement would seem to be exceedingly good news.

But across the Rust Belt and so much of America that is still chronically jobless and struggling, you could hear a pin drop.

The fact is, the official unemployment rate doesn’t tell you all that much about the health of the US economy.  Under Obama, it’s typically been used as a misleading indicator, suggesting a return to pre-recession “normalcy” that simply hasn’t occurred.

The Labor Department calculates the official rate — sometimes referred to as “U-3” – based largely on the number of people who filed for unemployment benefits during the previous four weeks.  If that number as a percentage of the total U.S. workforce decreases, unemployment is declining, Labor department statisticians conclude.

But privately, those same statisticians know that the U-3 rate is often highly misleading.

To develop a fuller picture of the labor market, they compile another, broader tabulation known as “U-6.”

Except that they are never asked to report that figure – not officially.  As a result, the American public never gets the full picture.

The U-6 rate includes data on two groups not included in the official U-3 rate.

One group is what economists call the “long-term” or “structurally unemployed.”  They’ve been unemployed for weeks, even months on end, and they’ve given up looking for work.  They’re not filing for benefits because most no longer qualify for them.

Another group is what economists often call the “under-employed.” These are workers who want full-time jobs but have settled for part-time work. Technically, they’re not unemployed, and aren’t counted as such.  Many employers love part-time workers because they don’t have to offer them health benefits.  If the workers are contract employees, employers don’t have to pay payroll taxes or unemployment compensation, either.

How large are these two groups?  In today’s economy, they’re enormous – and from available data, their ranks are still growing.

Take the part-timers.   Currently, there are roughly 6 million Americans who work part-time but want full-time jobs.  That’s the highest level of such workers in 30 years.  The number has come down somewhat since its peak during the 2008-2009 recession but many economists have begun referring to a “new normal” in the US labor market — a permanently high number of under-employed part-timers.

This is a disaster for the economy.  Part-timers on this scale drag down wages because they typically earn less for the same work that a full-timer employee might do.   In fact, many people in today’s economy are trying to cobble together two or more part-time jobs just to survive – and they’re still earning less than they would in a decent full-time job.

There’s an alternative metric to the U-3 and U-6 that neatly encapsulates the problem.  It’s called the “labor force participation rate.”   This figure measures the total part of eligible working population that is actually working or actively looking for work.  Figure 1 illustrates the labor force participation trend over the past half-century.   As indicated workers entered the economy massively beginning in the 1970s (largely due to the entry of women into the work force), a trend that largely continued over the next several decades until it began to plateau and then decline in the late 1990s during the Clinton administration. 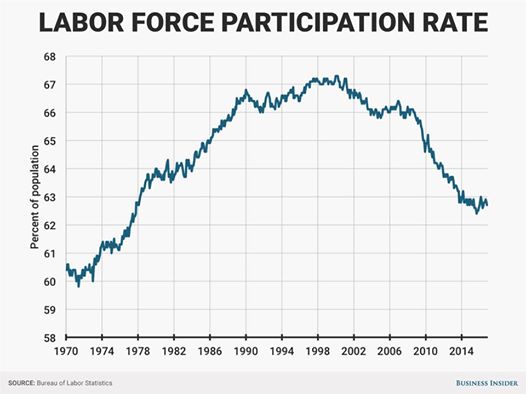 Then the Great Recession hit and the rate began to decline sharply.  In a normal boom and bust business cycle, that initial downturn should have remained a blip.  Instead, the slide has continued and shows no sign of slowing.   In fact, a recent Federal Reserve study predicts labor force participation will drop to 61% by 2022 – a low not seen since the 1970s.

This is deeply troubling.   A declining labor force participation rate depresses economic growth.  It also puts growing pressure on the federal budget because the tax base shrinks.  And for the workers, their time out of the labor force means lost training and on-the-job experience and reduced future earnings – assuming they ever make it back.

There’s another way to calculate the unemployment rate that is closer to the truth.  Add together the number who say they have stopped looking for work with those seeking a full-time job but who have settled for part-time work.  According to the Labor Department, that figure stands at 9.3 percent, about double the “official” unemployment rate, and well above the pre-recession level, too.  Others place the U-6 rate even higher — at 11%.

And there’s another critical issue to consider:  the quality, not just the quantity, of any new jobs.  Through 2014, the economy suffered a net loss of 1 million higher paying jobs, in sectors like accounting and legal work, but experienced a net increase of almost 2 million low-wage jobs in industries like fast food.  With lower-wage jobs increasing relative to higher-wage jobs, is it any wonder that real wages are continuing to decline?

This is why many workers in the Rust Belt shrugged last week at the news of another drop in the official unemployment rate. They’re still wondering if they’ll ever see good-paying full-time jobs again. They won’t unless American businesses have fresh incentives to re-invest in the American economy, boosting the growth rate and making “full employment” more than just a White House catchphrase.