President-elect Donald Trump veered off his anti-immigration message Tuesday night and told a crowd in North Carolina that hundreds of thousands of immigrants will come in during his administration.

While most of Trump’s campaign immigration rhetoric was focused on Muslim and illegal immigration, he did say that legal immigration harmed American workers. Trump’s plan for immigration reform during the campaign said that the “influx of foreign workers” keeps salaries down for working class Americans and immigrants alike.

The plan went on to say that the “admission of new low-earning workers” would need to be reduced in order to: “help wages grow, get teenagers back to work, aid minorities’ rise into the middle class, help schools and communities falling behind, and to ensure our immigrant members of the national family become part of the American dream.” 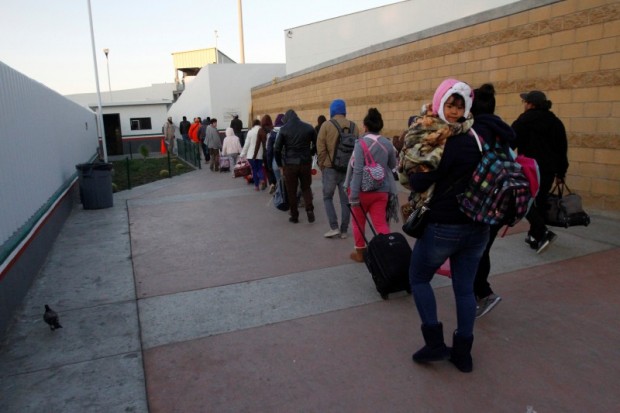 Immigrants from Central America and Mexican citizens, who are fleeing from violence and poverty, queue to cross into the U.S. to apply for asylum at the new border crossing of El Chaparral in Tijuana, Mexico, November 24, 2016. REUTERS/Jorge Duenes

Department of Homeland Security figures shows that just over one million legal immigrants entered the U.S. in 2014. Trump’s call for hundreds of thousands of legal immigrants was unclear in its time frame for when these immigrants would be let in and whether that number would be greater than recent years.

“What we need now is immigration moderation: slowing the pace of new arrivals so that wages can rise, welfare rolls can shrink and the forces of assimilation can knit us all more closely together,” Sessions added.

The rest of Trump’s North Carolina speech stayed on message and called for a reform to America’s visa program, halting immigration from countries with a history of Islamic extremism and building a border wall.