“We see a pretty strong relationship — states in worse financial shape tend to rank poorly on trust in state government, and states in good shape tend to rank higher on trust, at least according to the Gallup poll,” Bill Bergman, TIA research director, told The Daily Caller News Foundation. 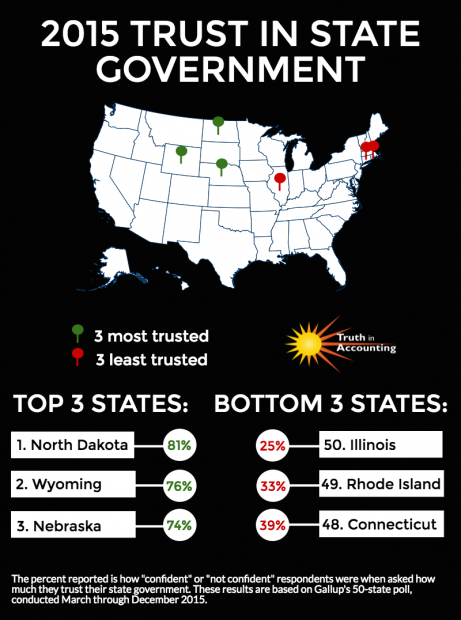 The most-trusted states are in green, the least-trusted in red, using Gallup data. Graphic: Truth in Accounting

Trust relates directly and indirectly to how a state manages its finances, Bergman said.

“States in bad financial shape directly pose consequences like higher taxes or reduced services to residents,” Bergman said. “And states in bad shape also tend to be those with higher shares of debt hidden, until recently, off of their publicly-reported balance sheets.”

But other factors — like corruption — play into trust or lack thereof, too, Bergman said. Illinois, with excessively generous and seriously underfunded public pensions draining the state’s finances, has also sent multiple high-profile politicians to prison.

Those include former Illinois Gov. Rod Blagojevich., who attempted to sell his appointment of a successor in President Barack Obama’s vacant Senate seat in exchange for political favors. (RELATED: Judicial Watch Sues Justice Dept. For Blagojevich And Obama Transcripts)

Residents in low-trust states often vote with their feet.

Bergman said politicians in states with low trust ratings should take a look at what the most-trusted states are doing right.