Advocating for a law criminalizing the desecration of the American flag has become part of President-elect Donald Trump’s stump speech as he travels the country thanking supporters.

Trump first brought up the notion of outlawing flag burning on Twitter a little over a week ago. “Nobody should be allowed to burn the American flag – if they do, there must be consequences – perhaps loss of citizenship or year in jail!,” he said.

At the time, some journalists thought Trump brought up the notion of punishing flag burning as a means to distract from other issues. The Intercept wrote, “Donald Trump Flag-Burning Tweet Inflames, Distracts, Offends the Constitution,” and Esquire wrote, “Trump Saw Something on Fox News, Hastily Tweeted About It, Now It’s the Daily Distraction.”

However, at his past three rallies, Trump has brought up flag burning and always in the form of a question. Last Thursday, he said, “Do you agree with my stance that if people burn the American flag there should be consequence? Right?” 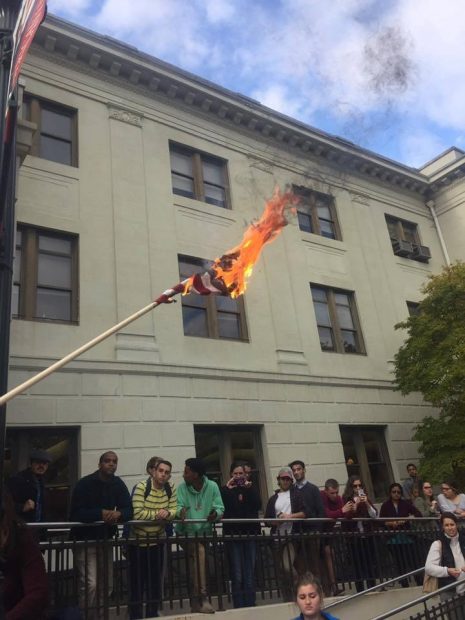 At his latest rally Thursday in Iowa, Trump spoke about honoring the service of veterans and added, “that really begins with honoring and respecting our American flag.”

Trump’s call to criminalize flag burning at this rallies has been vague and he faces obstacles to following through on this promise. Prominent Republicans such as Senate Majority Leader Mitch McConnell and House Majority Leader Kevin McCarthy have both said they respect the right of individuals to burn American flags.

The Supreme Court has also previously upheld the right to burn the flag.