As we head into 2017, all sorts of things are starting to make a big comeback. Under President Trump, dissent will be patriotic again. Homelessness will be seen as a problem again. Keeping a running tally of American troops killed overseas will be important again.

Russia will be the bad guys again.

Of course, some of us have been warning America all along that the Cold War never really ended. Some of us didn’t think it was a good idea to appease Vladimir Putin. Some of us were skeptical of the Reset button.

Some of us didn’t cheer when President Barack Obama said the following, during the third presidential debate of the 2012 campaign:

“Governor Romney, I’m glad that you recognize that al-Qaida is a threat. Because a few months ago, when you were asked what’s the biggest geopolitical threat facing America, you said Russia. Not al-Qaida. You said Russia. And the 1980s are now calling to ask for their foreign policy back. Because, y’know, the Cold War’s been over for 20 years.”

The Democrats made a big deal out of Romney’s supposedly outdated foreign policy views. They cut ads:

They capitalized on those speeches with oh-so-clever viral marketing: 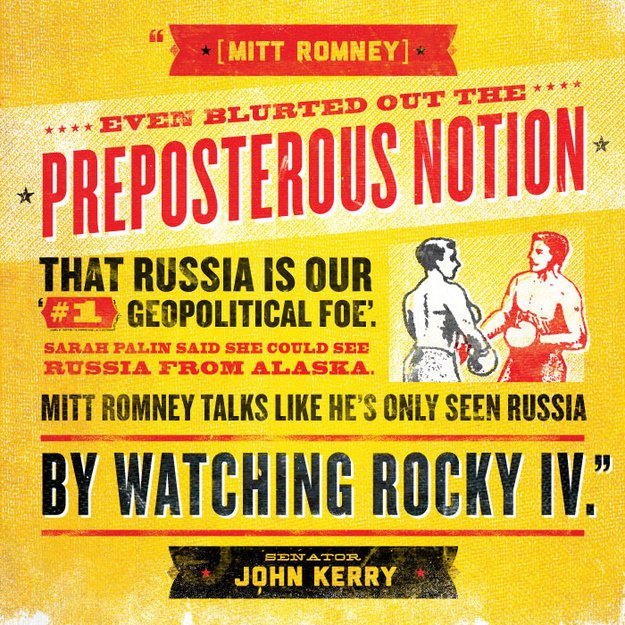 They convinced America that Mitt Romney was hopelessly out of touch about Russia in the 21st Century. And they won.

How about now, Mr. President? How did that “flexibility” with Putin work out for you?

Yep. Obama was so flexible, he had his ankles against his ears.

I don’t know if Romney would’ve made a good Commander-in-Chief. Maybe, maybe not. A lot of Republicans hate his guts, for reasons that I’ve never really understood. But he sure was right about Russia, among other things. And the Democrats laughed in his face for it. Obama couldn’t have been more scornful of the idea that modern Russia is a problem for the United States, and all his faithful lickspittles followed suit.

Downplaying the Russian threat helped the Democrats win in 2012. Now they want to blame the Republicans because Putin “threw” the 2016 election.

PUTIN INSTALLED TRUMP IN THE WHITE HOUSE
or maybe hillary was a terrible candidate, and her team was arrogantly incompetent
MISOGYNIST

Imagine, Republicans, what you would think after losing a close election, then finding out Russia was interfering on Hillary's behalf.

I don't like it either. But they didn't concoct those e-mails. It's all true. https://t.co/6FwCUCOg0W

It'd be one thing if the Russians had faked those e-mails. If it was disinformation. But it was all true. The truth is the truth.

Our suspicions about collusion between @TheDemocrats and the media were confirmed. But we should ignore it all because Putin?

Russia wanted Trump. You know who else wanted Trump? Hillary & our media. All three got what they wanted.

Let's all cry about a reality-show prez who rolls over for Putin, like the last 8 years never happened. https://t.co/JU2ZeZGo6c

If Obama is so worried about Russia, maybe he should've done something about it instead of hanging out with GloZell.

"Romney is a big dummy for thinking Russia is a problem. Now here's Obama to slow-jam the news." #ThisIsWhyYouLost

omg how did we get an unserious president who rolls over for putin pic.twitter.com/50HoeL3rDi

Republican leaders knew Russia was undermining our democracy during the election and they chose to ignore it.

So did Democratic leaders. They had 8 years to deal with this problem, and they chose not to. https://t.co/tEi7GUgA6g

Instead, they went after the people who've appeased them for 8 years. There might be a lesson there, if anybody's willing to learn it. https://t.co/vKHd5QrwVn

I knew @realDonaldTrump had an appeal to Red states but apparently that extended beyond our borders.

"An extraordinary breach has emerged between President-elect Donald Trump and the national security establishment" https://t.co/jKbAQYVbwZ

Remember when Romney was right about Russia, and your boss told outrageous lies about him being a tax cheat? https://t.co/1KGvmz47Gh

MT @peterdaou As an American, I want to know how Putin outsmarted and outplayed my country. pic.twitter.com/o9ZwhQl1tg

Four years ago, this kid scoffed when Romney said Russia is a problem. https://t.co/irRxNipeQl

To summarize:
Obama does nothing about Putin for 8 years
Putin acts like Putin
Democrats lose
Now it's a problem https://t.co/MnktInRVlW

.@TheDemocrats let Putin do whatever he wanted for 8 years. They openly mocked anybody who thought it was a problem.

This is the reaping.

We warned you, but you wouldn’t listen. If you genuinely believe that Vladimir Putin was the deciding factor in the 2016 election, you need to do some soul-searching about why you dismissed him as a problem when people like Mitt Romney were warning you.

So far, I’ve only seen one of you do so:

If CIA is right, this would be one of the most audacious – and successful – foreign intelligence operations against USA in history.

So….maybe Russia is a geopolitical threat after all? Even though you claimed the opposite four years ago? https://t.co/GhCsXx9kqf

Absolutely. When @POTUS mocked Romney in 2012 for saying Russia was top threat, I cheered. @POTUS was wrong. I was wrong. Mitt was right. https://t.co/spF0zRZWEG

It’s a start. We’ll see how many of Begala’s buddies are willing or able to acknowledge it. Obama definitely owes Romney an apology, but that would mean admitting error. Don’t hold your breath.

Does this mean I think Trump will be any better? Nope. I don’t think he’s the Putin toady he’s being painted as, but he’s shown way too much respect to “strongman” types for my liking. Sounds like this Tillerson guy is really cozy with Putin, and now Trump is actually slamming the CIA. These do not strike me as good signs.

But, as with so many other things regarding Trump, I have no idea what’s going to happen. I’ve been wrong about a whole lot of stuff ever since he came down that escalator 18 months ago, so I hope I’m wrong about this too.

By all means, Democrats, investigate why this happened. Start taking Putin seriously. Just don’t pretend you’ve been doing so all along.

At least try to learn from your mistakes.