It turns out two heads aren’t better than one.

That’s what Chipotle Mexican Grill (NYSE: CMG) decided on Monday after more than a year of plummeting sales following 2015’s food safety crises. It was about time for a head to roll as the stock’s 50% drop and 10 months of comparable sales falling 20% or more called for someone to get axed. On Monday, Chipotle Founder Steve Ells announced that his co-CEO Monty Moran would resign his post and his board seat effective immediately, and retire in 2017, making Ells the sole CEO.

That outcome wasn’t surprising. Chipotle’s recovery has taken much longer than the company or many analysts expected. At a conference last week, Ells pinned the blame on poor customer service and weak execution as he said half of the company’s stores received grades of “C” or worse in the company’s own audits due to problems like dirty bathrooms, messy beverage stations, and food shortages. As co-CEO’s, Ells had overseen the company’s food culture, while Moran was in charge of the “people” culture, or the human resources side of operations. Ells seems to believe that the lack of recovery now owes more to customer service problems rather than last year’s food safety problems as many lapsed customers have returned but aren’t visiting as frequently.

On the conference call, Ells underscored several areas where the HR process had simply become too complex, noting several rounds of interviews, inadequate training, and a promotional process that did not correlate with store performance or operational execution. Ells said that too much weight was being given to the so-called “soft skills” of customer service, rather than the “nuts and bolts” of operations: skills like preparing food, serving customers, and keeping the store clean. Turnover at the crew level also increased as the company instituted new food safety measures, adding to operational headaches.

Too many cooks in the kitchen

Even before the food safety crises, Chipotle’s co-CEO structure had come under criticism. The two chief executives were regularly targeted for excessive compensation as Ells and Moran received a combined $57 million, much more than CEO’s at other restaurants or similarly sized companies. In 2015, that figure fell by about half as the stock sunk, but that was still higher than its peers. In good times, shareholders can stomach high rewards for its leaders, but with the stock shedding 50% of its value, such a structure became untenable.

Chipotle’s board has also come under attack since the crisis for being too insular as the average member has served 14 years, and many of them have sat on the board since the company’s inception in 1993. Ells has been promising a new slate of members, but has yet to deliver even as expectations for a board overhaul have increased since activist investor Bill Ackman took a stake in the company.

Taking back the reins 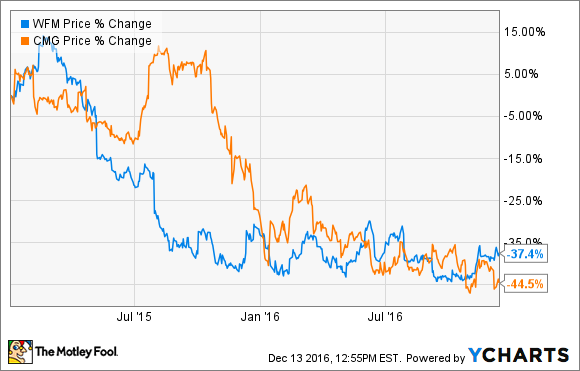 While Whole Foods did not suffer a catastrophe on the level of Chipotle’s food safety crisis, the one-time Wall Street darling has seen comparable sales slide for more than four quarters, stoking concerns that the organic grocer’s best days are behind it.

Along with Chipotle, Whole Foods was a leading pioneer of organic food in the U.S., but the company’s performance has slipped as rivals like Kroger have launched their own organic lines and competitors have undercut Whole Foods on price. Though it’s not Chipotle’s biggest problem, a proliferation of fast casual chains has also diluted its own brand promise and made its trademark propositions like “Food with Integrity” less unique.

It’s no surprise that troubled times caused both companies to jettison the dual leadership model. Such a structure can easily become unwieldy and inefficient, especially in tough times when leaders need to be making quick decisions to turn around performance.

For Chipotle, giving the reins fully back to Ells makes the most sense. Moran was a high school friend of Ells, who joined the company as in-house counsel before becoming COO in 2005 and then co-CEO in 2009. But he was never a true equal to Ells, a classically trained chef who founded the company, and whose vision continues to guide it. After a year of plunging sales, it seems that Moran was at least partially responsible for operational execution problems, and the need for his role had diminished. Ells’ ideas to make hiring, training, and promotions less complex and to focus on the nuts and bolts of operations should help improve in-store execution and customer service.

At this point, Chipotle investors have learned to temper their expectations for the burrito roller’s recovery, but eliminating the dual CEO structures should be a step in the right direction.

10 stocks we like better than Chipotle Mexican Grill
When investing geniuses David and Tom Gardner have a stock tip, it can pay to listen. After all, the newsletter they have run for over a decade, Motley Fool Stock Advisor, has tripled the market.*

David and Tom just revealed what they believe are the 10 best stocks for investors to buy right now… and Chipotle Mexican Grill wasn’t one of them! That’s right — they think these 10 stocks are even better buys.

John Mackey, co-CEO of Whole Foods Market, is a member of The Motley Fool’s board of directors. Jeremy Bowman owns shares of Chipotle Mexican Grill. The Motley Fool owns shares of and recommends Chipotle Mexican Grill and Whole Foods Market. Try any of our Foolish newsletter services free for 30 days. We Fools may not all hold the same opinions, but we all believe that considering a diverse range of insights makes us better investors. The Motley Fool has a disclosure policy.