Earlier this month, shareholders for an upstart defense contractor that sells drones to the U.S. Defense Department — as well as to more controversial clients like the kingdom of Saudi Arabia and the Ecuadorian air force — voted to keep retired Lt. Gen. Michael Flynn as vice chairman of its board of directors.

The vote, which was cast by investors in Drone Aviation Corp. on Dec. 6, raises a potential conflict of interest problem for Flynn, who was picked last month to serve as Donald Trump’s national security advisor.

The director of the Defense Intelligence Agency between 2012 and 2014, Flynn joined the board of the Jacksonville, Fla.-based Drone Aviation in April. The gig pays Flynn $36,000 annually and includes 100,000 shares of the company’s stock which become vested proportionally each month over two years. Given Flynn’s tenure on the board, he has accrued about one-third of the available stock, which trades at $2.80 per share.

Michael Glickman, a spokesman for Drone Aviation, confirmed to The Daily Caller on Tuesday that Flynn remains in the vice chairman position. He said that he is not aware of any discussions regarding Flynn cutting ties with the company, which began operating under its current name in 2014.

[Update: A source familiar with Flynn’s arrangement contacted TheDC after this article was published.

“Flynn has resigned from his board post and will be effective December 31. He is consulting his lawyers on the sale of his shares and the best approach to make that happen,” said the source, who did not know when Flynn submitted his resignation. The original story continues below.] 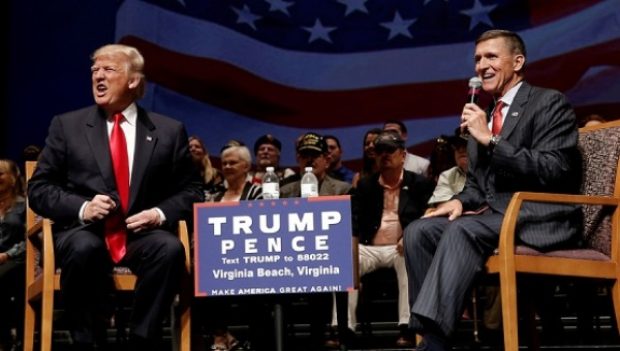 Potential conflicts of interest aside, Flynn’s position with the company makes perfect sense given his military background.

Drone Aviation, which has a $25 million valuation, sells tethered drones and lighter-than-weight aerostats. The products can be used for border and port security protection, crowd control, force protection, search and rescue missions and pipeline monitoring, the company’s website states.

As director of DIA, and as the former commander of the Joint Functional Component Command for Intelligence, Surveillance and Reconnaissance, Flynn was praised for his tactical acumen as well as his use of surveillance to gather information about terrorists in war zones. His pick to serve as Trump’s national security advisor has proved more controversial as Flynn’s critics have questioned his management style.

Since Flynn joined Drone Aviation, the company has disclosed three separate Defense Department contracts worth a total of $725,000. The company’s website also mentions contracts with Saudi Arabia and Ecuador but does not provide details of the arrangements.

Two of Drone Aviation’s Defense Department contracts, which are worth $325,000, deal with equipment for what’s known as a Winch Aerostat Small Platform, or WASP. A WASP, which looks like a large balloon, can be equipped with cameras and communications devices and can lift light loads up to an altitude of 1,500 feet. The benefit of WASPs are that they can be operated at a lower cost and with less maintenance to other aircraft.

Flynn is mentioned along with WASP business in Drone Aviation documents filed with the SEC.

Part of the company’s strategy to develop its WASP business relies on developing “access to key decision makers and officials” through Flynn, one filing states. 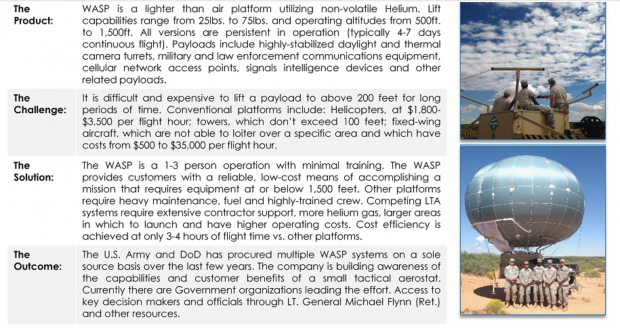 It is not unheard of for military officials to take board positions with defense contractors after retirement. Retired Gen. James Mattis, who Trump nominated for secretary of defense, sits on the board of General Dynamics, a major defense contractor.

But while Mattis’s relationship with that company received attention after the retired Marine general was nominated, Flynn’s position with Drone Aviation has gone largely unnoticed. And its not the first time he’s been found to have potential financial conflicts of interest.

Flynn announced days after that report that he would sever ties with Flynn Intel Group if he was chosen to serve as Trump’s national security advisor. Trump offered Flynn the position days later.

Flynn Intel Group terminated its contract with Inovo BV, the Turkish-controlled Dutch firm, on Dec. 1. The head of the company has said that he hired Flynn Intel to work on behalf of a Middle Eastern oil company that he has as a client.

Scott Amey, who serves as general counsel at the Project on Government Oversight, a non-partisan watchdog group, said Flynn will likely have to cut ties with Drone Aviation.

“In addition to his own conflicts of interest, President-elect Trump has nominated a number of individuals who have conflicts that will require resolutions,” Amey told TheDC. “Considering that drones are used by multiple federal agencies, I doubt Flynn can dodge the ethics rules. He’ll likely have to severe ties and divest his holdings to eliminate potential conflicts.”

The Trump transition team did not respond to a emailed request for comment on if and when Flynn will end the relationship.