Democrats in general, especially Democratic women, are much more likely than Republicans to block or unfriend people on social media over political disagreements, according to a new study.

The study, which was conducted by the Public Religion Research Institute, found that 24 percent of Democrats who use social media said that they blocked, unfriended, or stopped following someone after the election because of political differences.

That compares to only 13 percent of the survey’s respondents, which numbered 1,004 in all, who said that they cut ties on social media because of politics. Just nine percent of Republicans said that they removed people from their social circle for political reasons.

The survey, which was conducted by researchers Dr. Daniel Cox and Dr. Robert P. Jones, also found a significant gender gap when it comes to blocking and unfriending.

“Women are twice as likely as men to report removing people from their online social circle because of the political views they expressed online (18% vs. 9%, respectively),” the surveyors wrote. 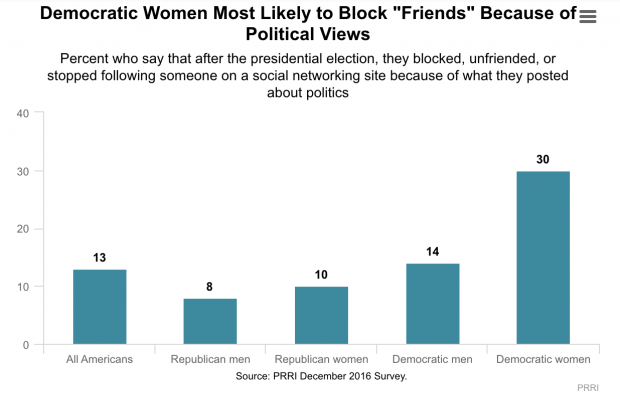 The study does not offer theories for the differences, nor did it ask respondents about what sorts of social media postings they consider to be block-worthy. It could be that Democrats are much more sensitive to social media postings about politics than are Republicans because GOP candidate Donald Trump won the presidential election.