The self-described “neosuffragist” group Betsy Riot launched a Christmas card-writing campaign earlier in November, organizing a grand total of 768 intensely graphic Christmas cards that feature pictures of people who shot themselves, according to the group’s Facebook profile.

The letters varied from the handwritten letter sent to Republican Missouri state Rep. Ron Hicks, which decried his support of a gun bill. “Please hurry up and go f**k yourself,” the letter said.

Other letters obtained by Breitbart news were officially printed, and included pictures of gunshot victims, but Breitbart found the pictures in the US National Library of Medicine National Institute of Health, and at least one of the pictures shows a self-inflicted gun shot. 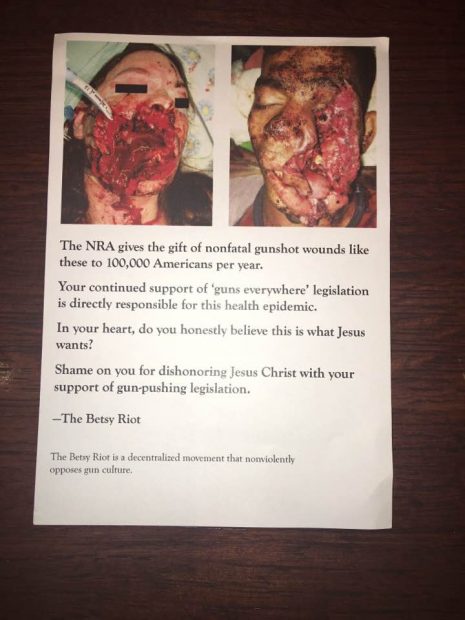 “The NRA gives the gift of nonfatal gunshot wounds like these to 100,000 Americans per year,” the letter asserts. “Your continued support of ‘guns everywhere’ legislation is directly responsible for this health epidemic. In your heart, do you honestly believe this is what Jesus wants? Shame on you for dishonoring Jesus Christ with your support of gun-pushing legislation.”

As of press time, The Daily Caller News Foundation remains unaware of any legislation that forces individuals to buy guns, the true definition of “gun-pushing” legislation.

Missouri Rep. Mark Parkinson added he planned to take his Christmas card to the gun range, and use the letter for target practice before sending it back, according to his Facebook post.

Outgoing Sen. Kelly Ayotte received a particularly egregious card, which read, “What is unforgiveable is your sleeping with the NRA and blocking commonsense gun laws,” before adding, “Fuck the NRA.”

The group’s internal messaging is rife with bloody images, and at least one member commented on the prolific use of vulgar language, saying, “Would love this without the Fuck. How about ‘Guns Kill Kids’ right here?” a user posted on the group’s Dropbox page.

The official Betsy Riot reply doubled down on the harsh tone of the campaign. “Sharing graphic gunshot wounds is a controversial thing. It is also truth,” an unnamed activist told the Daily Caller News Foundation. “The ugly reality behind the polemical and legislative aiding and abetting of the gun industry is unpleasant. But it needs to be faced and acknowledged.”

“No one wants to look at pictures of gunshot victims,” the statement concluded.

“We met at midnight in a parking garage in D.C. It was a little irritating because we had to wait for a couple of Washington Post reporters to finish with their secret contact and open a space up for us. It’s a ridiculously busy parking garage. But that’s D.C, I guess. And once we got the info, we delivered it to our followers via passenger pigeon.”