The Russian ambassador to Turkey was killed Monday at an Ankara art exhibition by an off-duty Turkish police officer who shouted, “Allahu Akbar, and “Don’t forget Aleppo.” Kuntzman wrote, “As Vladimir Putin’s man in Turkey, Karlov was the public face of that murderous dictator’s war crimes around the globe and of oppression at home.”

He went on to say Karlov is the “human embodiment of policies” that have killed children and leveled Syrian cities. “So I, for one, am shedding no tears for Andrei Karlov. Frankly, I’m surprised his murder didn’t come months ago,” Kuntzman added. (RELATED: For Every 21 Terrorists Killed In A Drone Strike, 1 Civilian Dies, Obama Reveals)

The Daily News columnist cited a Washington Post story that said America and its allies can do little to stop Putin’s operations in Syria. Kuntzman wrote that because of this fact, Karlov’s murder means “justice has been served.” 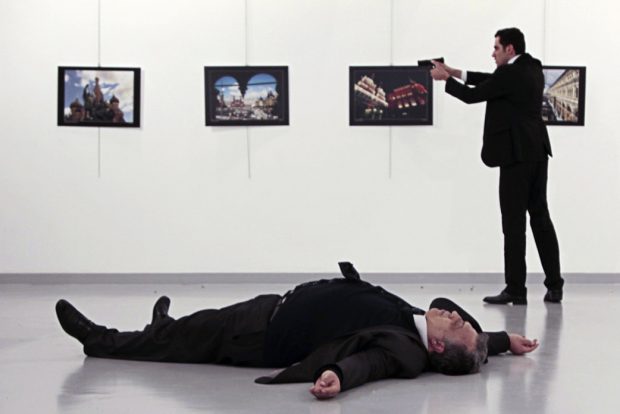 TOPSHOT – EDITORS NOTE: Graphic content / This picture taken on December 19, 2016 shows Andrei Karlov (bottom), the Russian ambassador to Ankara, lying on the floor after being shot by Mevlut Mert Altintas (R) during an attack during a public event in Ankara.
A gunman crying “Aleppo” and “revenge” shot Karlov while he was visiting an art exhibition in Ankara on December 19, witnesses and media reports said. The Turkish state-run Anadolu news agency said the gunman had been “neutralised” in a police operation, without giving further details. HASIM KILIC/AFP/Getty Images

Kuntzman also described Karlov in the piece in a way that is opposed to reality. He wrote, “Karlov’s job in Turkey was to ease tensions over Russia’s atrocities in Syria and its incursions inside Turkey itself — meaning his job was to enable and normalize Vladimir Putin. Given that role, he wasn’t a diplomat, but a soldier.”

The New York Times reported Monday that Karlov was a career diplomat who started his career in his early 20s and previously served as Russian ambassador to North Korea. The British ambassador to Turkey described Karlov as, “Quietly spoken, hospitable professional.”

But, according to Kuntzman, “his death is the same whether it came on a battlefield outside Aleppo or in an art gallery in Ankara.” He said that Karlov’s killer Mevlut Mert Altintas was also a “soldier” and that “soldiers kill their fellow soldiers.”

Karlov leaves behind a grieving wife, who reportedly passed out at the news of her husband’s death, and one son.

Kuntzman is the same columnist who said he suffered a “temporary form of PTSD” from shooting a rifle. 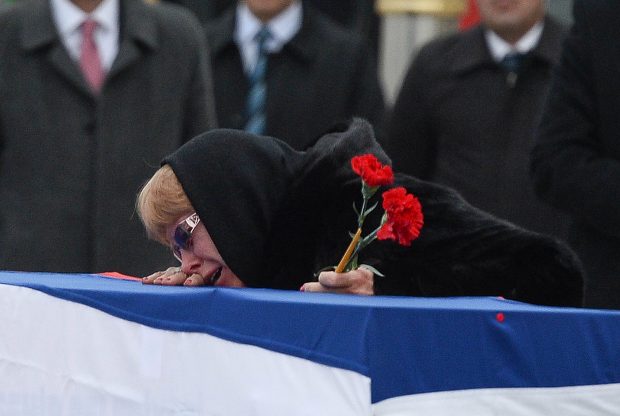 ANKARA, TURKEY – DECEMBER 20: Marina Karlov mourns her husband laying her head on top a flag-wrapped coffin of late Russian Ambassador to Turkey Andrei Karlov before being carried to a plane by Turkish soldiers during a ceremony at Esenboga airport on December 20, 2016 in Ankara. Turkey. Russia’s ambassador to Turkey, Andrey Karlov, was shot dead by a Turkish policeman shouting ‘Don’t forget Aleppo! Don’t forget Syria’ at an art exhibition in the Turkish capital of Ankara yesterday. (Photo by Erhan Ortac/Getty Images)