Turkey’s foreign minister has reportedly told Secretary of State John Kerry that the Turkish and Russian governments believe that the Ankara police officer who assassinated Russian ambassador Andrey Karlov on Monday is a follower of U.S.-based cleric Fethullah Gülen.

The report of the call comes from The Daily Sabah, a news outlet with close ties the regime of Turkey’s president, Recep Tayyip Erdogan.

Karlov was assassinated by Mevlut Mert Altintas, a 22-year-old police officer in Ankara, while speaking at an art exhibit in the Turkish capital. Following the shooting, Altinas shouted radical Islamist slogans and said the killing was revenge for Russia’s involvement in Syria’s civil war.

But Erdogan’s regime, as well as Turkish media outlets that operate under government control, say that Altintas was a follower of Gülen.

Erdogan considers the 77-year-old imam, who has lived in self-exile in Pennsylvania since 1999, to be a terrorist. He has accused Gülen of attempting to undermine the government and of masterminding the failed July 15 military coup. 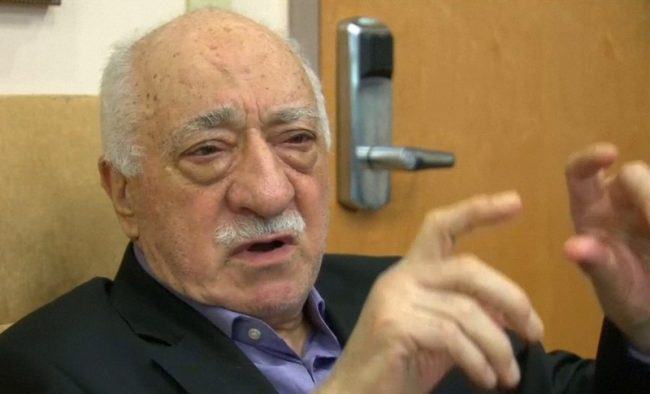 U.S.-based cleric Fethullah Gulen, whose followers Turkey blames for a failed coup, is shown in still image taken from video, speaks to journalists at his home in Saylorsburg, Pennsylvania July 16, 2016. REUTERS/Greg Savoy/Reuters TV

Erdogan has lobbied President Obama to extradite Gülen since 2014. That effort went into overdrive after the failed coup.

The Turkish government has not publicized any evidence that shows that Altintas is a follower of Gülen. Some critics of Erdogan and his Justice and Development Party (AKP) have pointed out that Gülen is often the government’s scapegoat following terrorist attacks and in other crises.

But numerous government-controlled news outlets reported that Atlintas had Gülenist material in his apartment. The outlets also reported that the gunman requested off work for several days around the July 15 coup attempt.

The Daily Sabah also falsely reported on Monday that Altintas shared an address in Ankara with a U.S.-based Turkish journalist that the Erdogan regime also says is a Gülenist. The journalist, Abdullah Bozkurt, published documents after the Sabah report showing that he did not share an address with the gunman, who was fatally shot after assassinating Karlov.

Asked for comment about Kerry’s call with Çavuşoğlu, the State Department declined to elaborate but said that a read-out would be released later on Tuesday.

During a daily press briefing, State Department spokesman John Kirby confirmed that a call took place and said that Kerry “did raise his concerns about some of the rhetoric coming out of Turkey with respect to American involvement/support, tacit or otherwise, for this unspeakable assassination yesterday because of the presence of Mr. Gülen here in the United States.”

Gülen issued a statement on Monday condemning the assassination.

He blamed the “deterioration of security and counter-terrorism efforts” in Turkey due to the government’s assigning “hundreds of counter-terrorism police officers to unrelated posts, as well as the firing and imprisoning many others since 2014.”