Russian forces fired “thousands” of artillery rounds into Ukrainian territory in 2014, effectively engaging in a direct act of war against a sovereign neighbor, according to new evidence gathered by investigative journalism site Bellingcat.

By analyzing satellite imagery of artillery craters in Ukraine, Bellingcat’s analysts were able to determine Russian forces fired on the Donetsk and Luhansk regions (collectively known as the Donbass area) from at least 149 separate locations. The new evidence shows that Russia not only supported separatist elements during the Ukrainian civil war in 2014, but also actively participated in it.

“Terms such as civil war or internal conflict are often used to describe the war in Eastern Ukraine. However, the available evidence no longer supports this view,” wrote Bellingcat’s Sean Case in the report. “Due to the frequency, spatial distribution, and scale of the artillery attacks considered in this report, it is impossible to consider these attacks merely as accidents or as the actions of rogue units. These attacks can only therefore be considered as acts of war of the Russian Federation against Ukraine.” 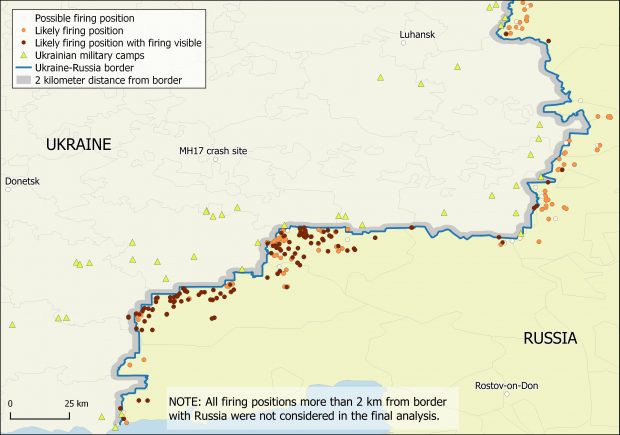 Case noted several reports of Russian servicemen and military equipment corroborate the conclusions of the artillery analysis report. Known colloquially as the “little green men,” several news sources claimed Russian troops poured over the border to fight on behalf of the Ukrainian separatists. These volunteers often wore Russian uniforms and carried the latest Russian military equipment, yet they did not wear Russian flags or name tags, a direct violation of the laws of war.

Russia claimed that the little green men were nothing more than “self-defense troops” who simply could have bought Russian equipment at army surplus stores.

Unlike the “little green men,” Bellingcat concludes the artillery strikes were performed by Russian forces in Russian territory. The strikes originated from artillery emplacements located across a massive stretch of the Ukrainian-Russian border. Bellingcat’s analysts only included emplacements located within approximately 1.8 miles (3 Km) of the border, meaning it is possible more existed.

Russia engaged in at least 149 separate artillery barrages against Ukraine throughout the summer of 2014. The strikes began in early July and “escalated in frequency and scale” into August and September 2014. The report’s conclusion is a conservative estimate based on strict parameters used in the analysis, but Bellingcat believes there were likely many more strikes.

“Due to the current lack of publicly-available satellite imagery evidence and the rigid classification criteria used here, these figures represent lower bound estimates of the true numbers of artillery attacks, i.e. there were likely considerably more than 149 attacks as already indicated by the 130 further likely artillery positions,” wrote Case.

The ongoing civil war in Ukraine began after the 2014 revolution which ousted Ukrainian President Viktor Yanukovych, a known Russian sympathizer. Russia forcibly seized Ukraine’s Crimea region shortly thereafter, and supported Russian separatists in the Donbass. Crimea was officially annexed in March 2014, while the fight for the Donbass continues to this day.