Kellyanne Conway just confirmed she’s definitely moving to Washington D.C. next year but stopped short of saying she had accepted a position in Donald Trump’s administration.

During an interview with TMZ, Trump’s senior adviser said she was currently “house hunting and school hunting” but said not everyone in her family is on board and she still needs to convince one of her kids that the move will be worth it. (RELATED: Kellyanne Conway ‘Kidding’ About Trump Working On ‘Celebrity Apprentice’)

“I am moving to Washington, house hunting there as we speak, and school hunting,” Conway responded. “We’ll see if Trump people are welcome in all the private schools down in Washington, D.C.”

“When you are a pollster and you have 75 percent agreement on anything you are pretty excited but when you are a mother you need 100 percent  agreement, and one of my children is a hold out,” she added. “So I am going to bring her down there and let her see how great it would be to live in Washington D.C.” (RELATED: Kellyanne Conway: Ivanka In The White House Would Benefit Trump ‘Tremendously’) 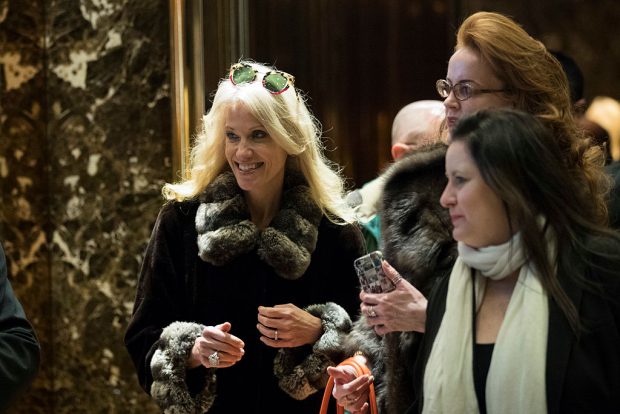 Conway also answered a question about whether or not celebrities will be welcome in the White House the next four years under Trump.

“Sure, why not if they’d like to visit, and they have something to add to the conversation?” Conway said. “They are certainly welcome. I mean look what happens though if you have celebrities for having celebrity sake.”

“That’s what Hillary Clinton did late in the game and it backfired on her,” she added. “By the way I don’t remember Beyonce or Jay Z giving a shout out against Russian hacking or Jim Comey or Bernie Sanders fault. Everybody figured she was going to win, nobody said otherwise, those who are trying to reverse the election results. All the election deniers.”

“As as you know the president-elect has met with probably close to a hundred men and women who want to share their vision and their experience and their ideas for America,” she continued. “And then he’s talked to about 55 or 60 world leaders now and that will continue. So, you can tell Scott Baio to give me a call.”