Earlier this year, Eichenwald made the following claim on Twitter: 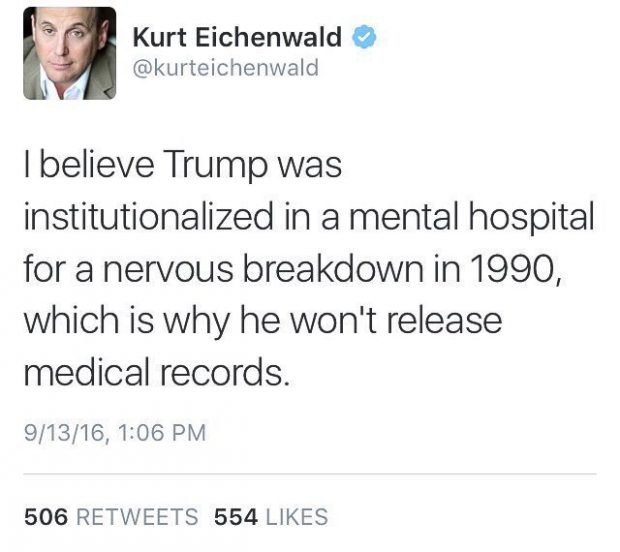 When Eichenwald was asked about this during his appearance on Tucker Carlson Tonight last Thursday, he wasn’t allowed to finish his explanation:

The following is a collection of tweets Eichenwald posted on the evening of Dec. 15, after his contentious appearance with Carlson. Eichenwald went back and deleted all of them for some reason, but they were autoposted to facebook.com/KurtEichenwald. I pulled them from there. In order to make the material easier to read, I’ve reformatted it into paragraphs. Otherwise, all typos, misspellings, and assertions of fact are from the original. It’s rather lengthy, but I think you’ll find that it’s worth the read.

And now, Kurt Eichenwald in his own words:

Here was my knife fight with @TuckerCarlson. As expected, he refused to let me answer so I’ll do it here. https://t.co/LqwZTD1h6S

This is not a rant. I just believe that people should here the answer that @TuckerCarlson stopped with his “why are u so awful” interview.

As I said, I obtaind Trump medical records in 1980s. Showed he was on amphetamine-derivatives 4 years. Execs at his co told me was a problem. By 1990, Trump was in terrible shape.

This is now about reporting process: A company exec in 1990 told me Trump had a breakdown from drugs and required hospitalization. I didnt bother to try and confirm because Trump was a private citizen and I did not think it was important.

As the campaign began, Trump showed behaviors described in 1980s as related to drug: impulsiveness, delusions of grandeur (i know more than generals, i know tax code better than anyone) lack of sleep, etc. His 2016 medical letter did not mention the conditions listed in his 1980s medical records. I called the person who told me about the supposed 1990 episode and he repeated his claim. He also told me that there was another person who knew something about it. However, he said if I called this person directly, the person would not talk to me. He said I had to produce something that would allow him to go to this individual and show him i knew something independently. (Both have since given me permission to tell this story.) There was no way i could think of to do this.

Then @FoxNews, @seanhannity, @TuckerCarlson and the rest finally gave the answer. During that time, they were going on the air saying that they believed Hillary had seizures, multiple sclerosis, parkinson’s, a rare vein disease in the brain. Later, @TuckerCarlson also said that he believed HRC had more than pneumonia, despite fact a medical letter showed she didnt. But that was a later @TuckerCarlson lie.

The very day of the tweet i sent, an official with Trump said he “believed” that Hillary had a brain implant to deal with Parkinsons. I decided to send array of tweets, ridiculing this “I believe she has seizures” I believe she has brain implant” and the Dr. Oz stunt. The purpose was to send the final tweet, that my first source could show the second source as evidence that I had independent info regarding whatever took place in 1990.

In what I thought would be seen as me mocking the “I believe” line being used by Fox, I sent the “I believe” tweet cited by @tuckercarlson. I overestimated the likelihood that people would see this as a play on the Fox nonsense and many ppl took it seriously, which it was. I believe this to be true. But, unlike at Fox, my “beliefs” are not news.

The gambit worked. The second source spoke to me. Unfortunately, I had multiple sources giving me different pieces of information which all added up to something, but did not clear my standards for reporting. This is why I have never gone beyond the “I believe” and why now I am describing this as reporting process, not conclusion. (There is no doubt, however, that Trump was on amphetamine derivatives.)

Based on the information I had, if it was about Hillary, Fox would have run a 12 part series. But it did not meet my standards, so I did not report it and kept working. If my sources are correct, it is important because Trump is again showing impulsiveness, lack of self control and overblown sense of himself (Im too smart to need daily intelligence briefs, for example.) So, Tucker wants to say that my “I believe” tweet that was sent in a way I thought ppl would think was a play on Fox – but was true — was outrageous, even though i was simply mimicking their parkinsons, seizures, brain implants, multiple sclerosis nonsense about Hillary.

I had a basis for belief and unlike them, I attempted to mask it so it would not be taken seriously by anyone other than the sources who knew. @TuckerCarlson never made any such effort. He proclaimed diagnoses, as did Hannity and company, based on nothing. Mine was based on reporting and had a further reporting purpose. I only sent out an “i believe” tweet. They engaged in “I believe” diagnoses in front of millions.

So, that is the answer @TuckerCarlson refused to allow me to say. I have always been surprised that ppl, with the wind up of jokes about the Hillary health care nonsense somehow knew that tweet was serious. But I have never commented on it until @TuckerCarlson decided to make his accusation.

Finally, as I said, I have a large book of @TuckerCarlson falsehoods that he has uttered on air and printed in newspapers. I believe folks need to know this. I will be posting one new falsehood from my “Tucker Carlson Falsehoods” notebook every day until I run out.

One more message: @TuckerCarlson cut me off before I was able to deliver the message from the intel officer to him. As I said, our nation’s intel officers put their lives at risk every day. There are ppl right now in Russia who are providing information about the interference with our election and elections in Western Europe, and doing so at great danger to themselves. This information is sent to Langley, where analysts work long hours for low pay to put together the intelligence info that Trump refuses to sit down and hear in a Daily Intelligence Brief. And then people like @TuckerCarlson go on the air and, on the basis of nothing, insult the intel with no knowledge of what is going on. The people who work to get this info out are braver and risk more out of pure patriotism than @TuckerCarlson @seanhannity or me. However, I don’t insist their work, like they do. My belief is, u tell these patriots thank you. Not call them liars or incompetent. So the message I had from the intel officer was this:

.@TuckerCarlson: “Stop denigrating intel officers & analysts who are working hard 2 keep u safe. They deserve 2 be honored, not belittled.”

My first entry from the “@TuckerCarlson Falsehoods” notebook. I will be posting one each day.

And that was the last tweet he deleted that evening.

That’s a lot to take in, but some of it seems to line up with his explanation to George Stephanopoulos yesterday:

So: Eichenwald was making a joke, and “signalling to a source,” but he also really believes that Trump was institutionalized in 1990. The problem is that he can’t prove it — it’s merely “reporting process” — so he hasn’t said so publicly. Except for when he did say so publicly, but that doesn’t count because he really doesn’t like Tucker Carlson.

If Eichenwald genuinely believes that Tucker prevented him from explaining all of this on the air, then I’m glad to help make things right. I wish him well as he pursues justice, both socially and legally.