Department store stocks jumped after U.S. election results came in on Nov. 8. Shares of companies like Macy’s (NYSE: M), J.C. Penney (NYSE: JCP), and Kohl’s (NYSE: KSS) saw advances of 20% or more in the weeks following President-elect Donald Trump’s victory, but prices have been pulling back once again in the last couple of weeks. 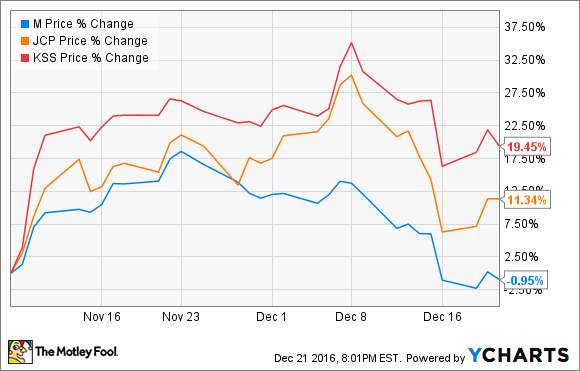 The woes for the retail juggernauts of yesteryear continue, so the negative retracement isn’t a surprise. Still not out of the woods, the sector could have more pain to endure yet.

What the real numbers are showing

The problems department stores have been experiencing start with declining sales. In the U.S. Census Bureau’s retail report for November, the average department store is showing a 5.2% year-over-year decline in sales.

The trouble isn’t new, though. The trend has been in place for some time now. After peaking in the early 2000s, consumer interest in the beleaguered kings of the mall has been in relentless decline. 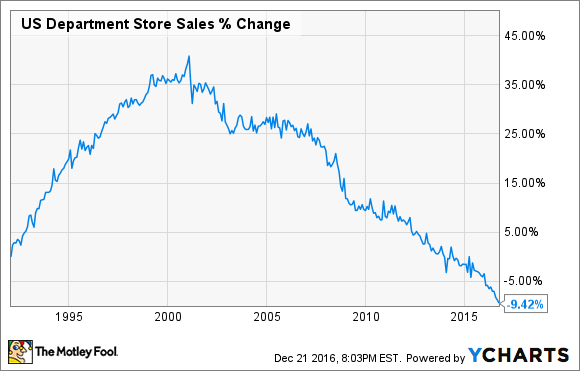 One of the main reasons for the ugly numbers is that foot traffic is thinning out. This hasn’t been an isolated occurrence. During the third quarter, Macy’s reported a comparable-sales decrease of 2.7% from the same period last year and a 3.5% decline on the year. Kohl’s wasn’t much better, with a quarterly drop of 1.7% and a 2.4% decline year to date.

J.C. Penney, still recovering from a botched makeover from a few years back, has been the exception to the rule and expects a slight 1% to 2% increase this year.

A bet to curb the bleeding

Ever since the concept of internet-based purchasing took off, the average traditional store has been getting its lunch eaten. Americans love to go shopping, but we also appreciate convenience. As a result, digital-based sales have been growing by double digits, leaving brick-and-mortar locations the scraps.

It isn’t as if trips to the store have ceased to exist. However, with the advent of the internet, the number of physical locations needed to service the population has been reduced. Many retailers have been closing down underperforming locations to maximize usage of those remaining and use new digital stores to fill in the gaps.

For example, Macy’s announced in August the closing of another 100 full-line locations out of its current 728 stores. Already, 90 locations have been closed since 2010. While the company expects the closures to lead to sales reductions of $1 billion, plus another $249 million in charges to close, it believes that expense savings will soon offset those losses and free up cash for more-profitable locations and digital sales efforts.

Kohl’s and Penney have also been closing locations, but at a slower rate. Penney closed seven locations in small markets this year, and Kohl’s closed 18 in attempts to curb costs and increase profitability even against the backdrop of falling overall sales.

The future of retail

In light of the industry’s deteriorating business, the recent rally in share prices following the election was unwarranted. Nothing about the situation at department stores had materially changed, so it was inevitable that the run-up would reverse. The next big test will be after the New Year, when retailers start to release results from the holiday shopping season.

In today’s digital world, it seems that there are still too many physical stores in existence. There is still a place for brick-and-mortar storefronts, but companies haven’t yet found the perfect balance between those and digital stores.

As long as digital sales continue to grow at an aggressive rate, it will be hard to get excited about any rally in department stores. For me, it’s too early still in this shakeout to put any money on the table.

10 stocks we like better than Macy’s
When investing geniuses David and Tom Gardner have a stock tip, it can pay to listen. After all, the newsletter they have run for over a decade, Motley Fool Stock Advisor, has tripled the market.*

David and Tom just revealed what they believe are the 10 best stocks for investors to buy right now… and Macy’s wasn’t one of them! That’s right — they think these 10 stocks are even better buys.

Nicholas Rossolillo has no position in any stocks mentioned. The Motley Fool has no position in any of the stocks mentioned. Try any of our Foolish newsletter services free for 30 days. We Fools may not all hold the same opinions, but we all believe that considering a diverse range of insights makes us better investors. The Motley Fool has a disclosure policy.