After Ivanka was harassed, Duca said on Twitter that “Ivanka Trump is poised to become the most powerful woman in the world. Don’t let her off the hook because she looks like she smells good.”

“What are the venues where you shouldn’t scream your political views at people, would a funeral be out-of-bounds, church, her son’s bris, like what are the rules on that?” the “Tucker Carlson Tonight” host and Daily Caller founder asked.

“Yeah, well, what I think is a nonpartisan issue is that air travel is horrific and I don’t think anybody should be enduring confrontations in the air, be it Ivanka Trump with her children or any other human being in a tin can and feeling dehydrated,” Duca said, attempting to walk back her defense of the harassment.

“At the same time, she does have an incredibly powerful position and she’s not just a mother she is a powerful woman who is connected very closely to the president-elect not just as his daughter but in many ways as his business confidant and adviser and I think we haven’t quite been able to define what those roles mean,” Duca continued. “So, while I don’t want anyone being yelled at on a plane, I don’t want anyone yelling at me on a plane, I don’t want to yell at anyone on a plane but I think Ivanka’s incredibly compelling brand and presence and role as a mother and successful woman, those are interesting and attractive and interesting aspects of her brand.”

“But wait a second, that’s not at all what your tweet suggested,” Carlson said, later noting another tweet in which Duca said that “Ivanka HAS IT ALL, [and] by that I mean, ‘a job, family [and] sinister complicity in aiding the most aggressively anti-woman candidate of our time.'”

“Sinister complicity, what does that mean? She’s his daughter,” Carlson asked.

“She was a surrogate frequently throughout, she did interviews, she did speeches on his behalf, where she represented a platform of women’s empowerment,” Duca answered, later adding that people shouldn’t be “blinded by the fact that she looks like she smells like vanilla.”

Carlson then called Duca out for a tweet in which she wrote, “eat shit [Donald Trump].” Duca denied that she ever wrote the tweet but TheDC saved a screenshot of it. 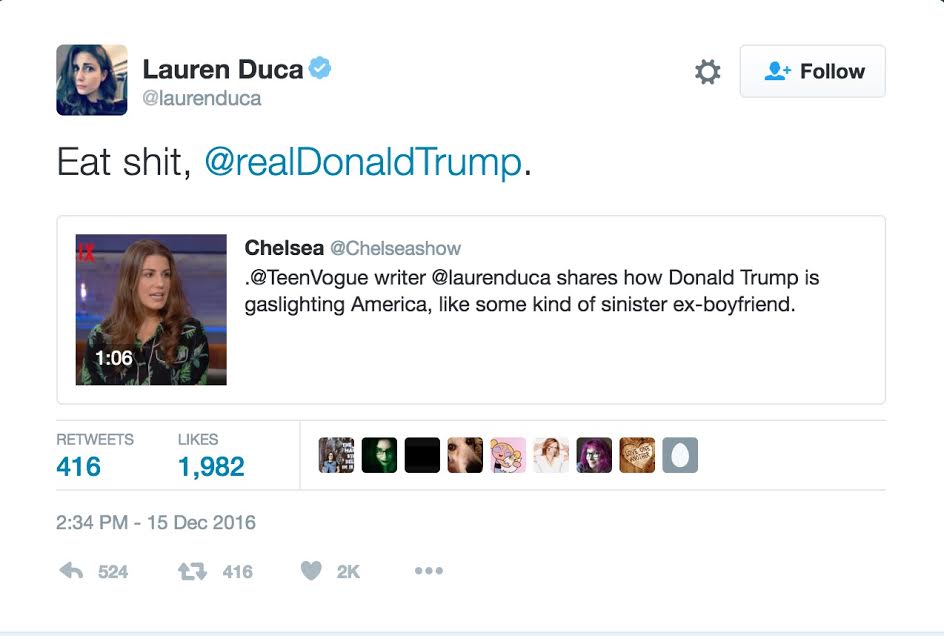 Carlson also poked fun at Duca for an article she wrote about Ariana Grande’s “Most Epic Thigh-High Boots.” Duca did not appreciate the humor, later saying, “You’re a sexist pig” after Carlson told her to stick to writing about thigh-high boots.

The whole interview is worth watching and can be seen below.