Speaking at a Muslim conference in Chicago on Monday, the daughter of Recep Tayyip Erdogan, Turkey’s president, claimed that an organization operated by U.S.-based cleric Fethullah Gulen is “actually more dangerous” than ISIS, the brutal terrorist group.

Sumeyye Erdogan Bayraktar offered those strong words, as well as a defense of her father’s authoritarian regime, during a keynote speech at the 15th annual Muslim American Society-Islamic Circle of North America (MAS-ICNA) convention.

Both of the Muslim groups are closely aligned with the Muslim Brotherhood.

Bayraktar, who has attended Indiana University, spent the first part of her speech defending Turkey as a beacon of democracy and tolerance in the Middle East. She shot down accusations that her father’s government is clamping down on the press and marginalizing political opponents.

Hundreds of journalists have been jailed in Turkey — the most of any nation in the world — based on alleged ties to the Gulenist movement and Kurdish separatist groups. Numerous news outlets have also been shuttered because of alleged links to the groups while tens of thousands more Turkish citizens have been detained for the same reasons.

But Bayraktar defended the crackdown.

“The fact is, every person regardless of their profession has to face the full consequences of law if they have links to a terrorist organization or promote criminal terrorist propaganda,” she asserted.

“There is not one journalist in Turkey who has been imprisoned for journalistic activities nor for criticizing the president.”

Bayraktar spent the second half of her speech railing against the Gulen movement, which she referred to as FETO, the Fethullah Terrorist Organization.

“FETO is actually more dangerous than Daesh,” she said, using another name for ISIS.

“It is easier to turn some hopeless, desperate, uneducated youth into militants. They have little to lose. If someone comes and promises them paradise, they may give it a try. FETO takes possession of the minds and hearts of well-educated doctors, engineers, generals, scientists, etc.”

Erdogan blames the Gulenist movement for orchestrating a coup attempt against the Turkish government on July 15. Erdogan has claimed that its leader, Fethullah Gulen, masterminded the effort, which was carried out by members of the Turkish military and left more than 240 civilians dead.

Turkish government officials also said last week that the Ankara police officer who assassinated Russian ambassador Andrey Karlov was a Gulenist. Russian officials are investigating the assassin’s motives, and little evidence outside of that produced by Turkey’s government-controlled media has established ties to Gulen.

The Gulen issue could pose a major diplomatic problem for the incoming Trump administration. While the Obama administration has shown no indication that it wants to accede Turkey’s request to extradite Gulen, who has lived in exile in Pennsylvania since 1999, at least one Trump official, national security advisor-designate Michael Flynn, has publicly called for Gulen’s deportation.

Flynn wrote last month that the U.S. should extradite Gulen in order to improve relations with Turkey, a NATO ally and partner in the fight against ISIS.

During her speech, Bayraktar not only portrayed Gulen and his followers as terrorists, but also as bad Muslims. She told her audience that Gulen places himself above Allah. She also said that Gulenists drink alcohol in public in order to mask their Muslim faith in order to blend into American society. 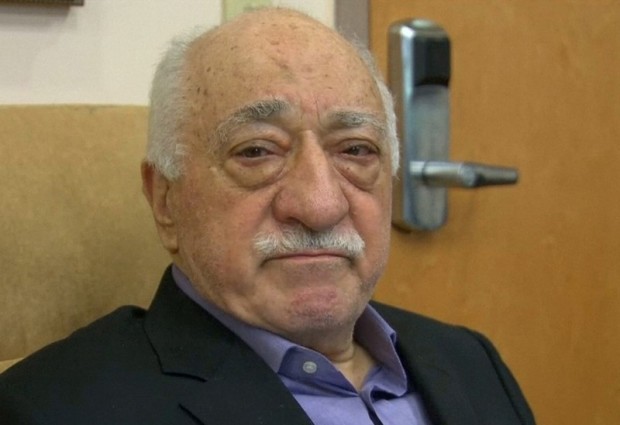 She also cited controversies involving the Gulenist movement’s network of charter schools in the U.S.

“The truly frightening fact is that the Gulenists own the largest system of charter schools in the United States, with more than 150 schools. So this terrorist cult receives $500 million of your tax money every year,” Bayraktar said.

The Gulenist charter school network is increasingly controversial in the U.S., though not for any involvement in radical teachings. Instead, the schools have reportedly been investigated for improperly using H1-B visas in order to bring Turkish citizens to the U.S. to teach at the charter schools. In some cases, the teachers speak little English.

The MAS-ICNA convention is a who’s who of radical Islamic elements. Mohammad Qatanani, the imam of the Islamic Center of Passaic County. Qatanani currently faces deportation from the U.S. because he failed to disclose on his green card application that he was once a member of the terrorist group Hamas. (RELATED: Keith Ellison Cancels Speech At Radical Islamist Group’s Annual Convention)

Minnesota Rep. Keith Ellison was slated to speak at the MAS-ICNA conclave. But he backed out last week, likely because of the controversy it would generate while he is running for chair of the Democratic National Committee. Ellison has come under fire from Jewish groups because of his past statements criticizing Israel and because of his close ties to anti-Semitic Muslim leaders.

Prior to her speech on the MAS-ICNA main stage, Bayraktar gave a talk about the July 15 coup attempt at a smaller conference hosted by the Turkish American National Steering Committee, a U.S.-based non-profit group that advocates for the Turkish government.