A Georgetown University associate professor had a month-long meltdown after a Muslim woman explained why she voted for President-elect Donald Trump.

Asra Q. Nomani, a former Georgetown journalism professor and Wall Street Journal reporter, wrote an op-ed in The Washington Post Nov. 10 explaining why she, as a Muslim woman and “long-time liberal,” voted for Trump. “I support the Democratic Party’s position on abortion, same-sex marriage and climate change,” Nomani wrote. “But I am a single mother who can’t afford health insurance under Obamacare.”

C. Christine Fair, a previously “friendly colleague,” went on a 31-day screed against Nomani spanning across Twitter and Facebook. According to Nomani’s Dec. 23 follow-up complaint to the university, the “Peace and Security Studies” professor called her a “wretch,” “clueless dolt” and a fame-monger.

Fair also compared Trump to Adolf Hitler and asserted that Nomani’s vote for Trump “helped normalize Nazis in DC.” She didn’t clarify if she was referring to Trump supporters or actual Nazis marching the streets. 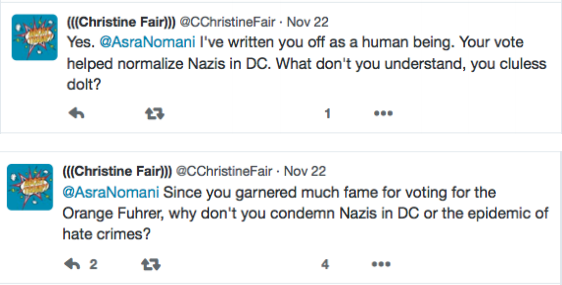 Nomani replied that she “condemns all hate” and called Fair’s attacks against her “unfortunate.” After another series of exchanges, Nomani told Fair to “take a deep breath & step away from the keyboard.”

Fair proceeded to call her a “fame-mongering clown show” and a “fraud.”

She again attacked Nomani Dec. 6 with “an open letter” on Facebook, in which Fair told her to “fuck off” and “GO TO HELL.” 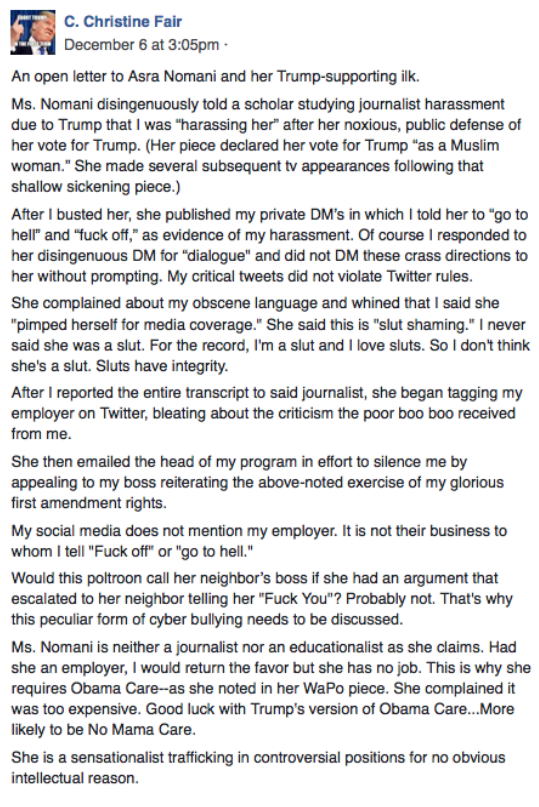 It’s unclear why Fair announces that she’s “a slut.”

Nomani told The Daily Caller News Foundation that Georgetown professor Bruce Hoffman replied to her original Dec. 2 complaint on Dec. 3. He told her he forwarded her complaint to professor Irfan Nooruddin. Nooruddin is the faculty chair of Georgetown’s School of Foreign Service.

Nooruddin told Nomani in a Dec. 4 email that, “I shall follow up directly with Professor Fair.” Fair posted her Facebook rant about Nomani two days after Nooruddin said he would speak with her. Additionally, she threatened Nomani in an email Dec. 6 with “legal action.” “Your attempt to silence my opinion or force a dialogue by involving my employer is unacceptable and any further action on your part to involve Georgetown will be met with legal action,” Fair wrote. “Your social media and email appeal to my employer with the intent or threat of damaging my employment status is a form of cyber bullying, which will not be tolerated.”

Nooruddin emailed Nomani a day later on Dec. 7: “Let me answer your question directly by referring you to the “Faculty Responsibilities Code” of the Georgetown Faculty Handbook: https://facultyhandbook.georgetown.edu/toc/section3#7. This section under point 5 lays out the formal steps. The first of these involves a complaint to the unit head (in this case, me). If I fail to resolve the situation satisfactorily, then I must take it to the Dean within 5 days. And it goes from there.”

He did not elaborate on what resolving “the situation satisfactorily” entailed, but said, “So, if you wish me to try again, i [sic] shall. If that doesn’t yield the desired outcome, I can then take it to the Dean if that’s what you want.”

Nomani emailed Nooruddin five days later on Dec. 12 to say that she wanted to proceed with a formal complaint. He replied that he would proceed once she sent a formal complaint. Nomani sent the formal complaint Dec. 23, the same day Fair called her an atheist on Twitter. Publicly stating a Muslim is an apostate by calling them an atheist on Twitter could have serious repercussions. Radical Islamic extremists often declare civilians apostates before attacking them, because in their interpretation of the Quran, renouncing Islam is punishable by death. 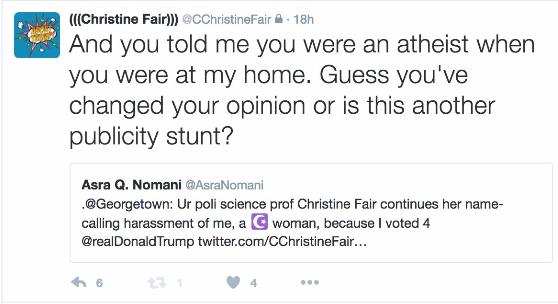 “This note acknowledges receipt of your complaint against Professor Fair,” Nooruddin replied. “I shall follow university policies as appropriate.”

“The attacks against me by a professor at Georgetown University are particularly disturbing because Georgetown gave me a home to complete the investigation of the murder of my friend and colleague Danny Pearl by militants in Pakistan,” Nomani told TheDCNF. “I would like to see Georgetown uphold its values for peace and civil discourse. And I would gently urge anyone who is as disturbed as I am about Prof. Fair’s conduct to remain civil and not engage in any personal attacks because we have to be the civility we want to see in the world.”

Neither Georgetown University nor Fair responded to repeated requests for comment.

Fair has worked at Georgetown since July 2009, according to her LinkedIn profile. A four-year undergraduate degree at Georgetown costs anywhere from $46,750 to $70,520 per year depending on the degree, according to its Office of Student Financial Services.

Fair’s personal website says “she can cause trouble in multiple languages,” and her YouTube features videos like “Introducing the Pussy Avenger” and “Tales of My Pussy.”

She occasionally breaks up the politically charged musings with posts about cute animals.