An alleged former fundraiser for the terrorist group Hamas was spotted at an annual Muslim Brotherhood convention in Chicago this week working as a bodyguard for Sumeyye Erdogan Bayraktar, the daughter of Turkey’s authoritarian president, Recep Tayyip Erdogan.

Salah Sarsour was seen wearing an ear piece and directing foot traffic around Bayraktar during her appearance at the Muslim American Society and Islamic Circle of North America (MAS-ICNA) annual convention.

Patrick Poole, a journalist and terrorism analyst at Unconstrained Analytics, identified Sarsour from photos taken of Bayraktar at the convention, where she spoke Monday night.

Both MAS and ICNA are closely linked to the Muslim Brotherhood, a radical Islamist group that gave birth to Hamas in the late 1980s. The U.S. government designated Hamas a terrorist organization in 1995.

Sarsour, who resides in Milwaukee, raised money for the group during that period, the FBI has alleged.

Sarsour was named in a 2001 FBI document as a money man for the Holy Land Foundation for Relief and Development (HLF), a Texas-based group that served as a financial conduit for Hamas.

Money raised in the U.S. for HLF, which was designated a terrorist group in 2001, usually went to pay for Hamas’ operations in Palestine and to the families of martyrs who carried out attacks against Israelis.

In April, Jonathan Schanzer, the director of research at the Foundation for Defense of Democracies, identified Sarsour during testimony he gave to the House Foreign Affairs Committee about the anti-Israel Boycott, Divestment, Sanction (BDS) movement. 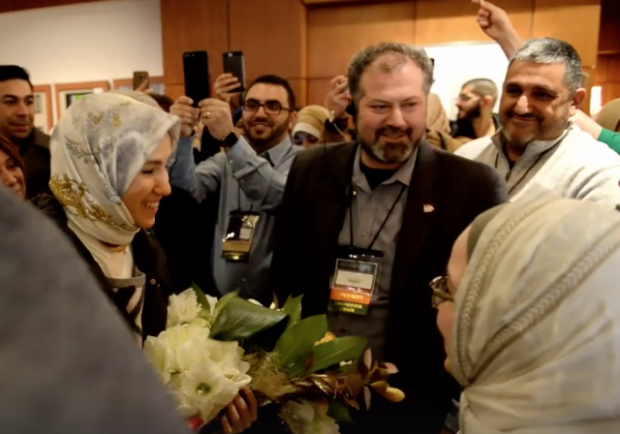 Sarsour serves as a board member for American Muslims for Palestine (AMP), a group that supports the BDS agenda. Last year, he told Al Jazeera that a conference he organized for AMP “aims to keep up with and support the Palestinian people’s continuous intifada.”

“Sarsour’s past is cause for concern,” Schanzer said during his testimony.

Schanzer noted that Sarsour’s brother, Jamil, told Israeli authorities in 1998 that he and Salah passed money in $1,000 and $2,000 increments through their furniture store in Milwaukee to a Hamas operative named Adel Awadallah.

Awadallah was a commander with the Qassam Brigades, Hamas’ militant wing. He and Salah Sarsour became friends while sharing a prison cell in Ramallah in the 1990s. Sarsour was imprisoned for eight months because of his ties to Hamas.

Jamil said during that interview, which is published online by the Investigative Project on Terrorism, that after Awadallah was killed by Israeli agents in 1998, Salah stated his intention to carry out an attack in Israel to avenge his friend’s death.

“My brother decided he wanted to vindicate their deaths, and decided to plan an attack against Israel. I don’t know if he did anything or he just said he would do such a thing, but he was arrested,” Jamil Sarsour told Israeli authorities.

Sarsour, who posted an announcement of Bayraktar’s visit on his Facebook page, has not flown entirely under the radar since his Hamas fundraising days. In addition to Schanzen’s testimony, The Wall Street Journal flagged the ex-Hamas operative’s activities in an article published earlier this year. Terrorism watchdog groups like the Investigative Project on Terrorism have also kept track of his activities.

In 2003, ABC News published an article about Jamil Sarsour entitled “Suspected Terrorists Hiding In Plain Sight.” The piece noted that Jamil was suspected of helping “finance a string of suicide bus bombings in Israel, including one that killed two Americans — Sarah Duker and Matt Eisenfeld — who were planning to be married.”

Neither of the Sarsour brothers have faced terrorism charges in the U.S., though Jamil has been charged here with illegally structuring currency transactions. He was arrested in 2002 after being deported back to the U.S. from Israel, where he was jailed for several years because of his Hamas work.

While Salah Sarsour has likely cut his financial ties to Hamas, he appears to maintain a symbolic connection.

A photo posted on Sarsour’s Facebook page two years ago shows him wearing a red-and-white keffiyeh over his face. The keffiyeh has long been a symbol of Palestinian nationalism, and the red/white variety has become closely associated with Hamas and its Qassam Brigades.

Sarsour did not return a request for comment for this article, but his appearance at the MAS-ICNA convention is not a complete surprise. Nor is a former Hamas operative’s proximity to Bayraktar, Erdogan’s daughter. Erdogan’s Justice and Development Party is allied with the Muslim Brotherhood. Erdogan is also close to Hamas leader Khaled Mashal.

Hamas alum are also no strangers to MAS-ICNA events. That could be why Minnesota Rep. Keith Ellison recently cancelled a speech he was scheduled to give at the conclave this week. Ellison has come under heavy scrutiny for his ties to radical Muslim leaders and his past anti-Israel comments. He is currently running to take over as chair of the Democratic National Committee. (RELATED: Keith Ellison Cancels Speech At Radical Islamist Convention)

Mohammad Qatanani, an imam in New Jersey, spoke during several sessions of the three-day convention. Qatanani is facing deportation from the U.S. because he failed to disclose his past ties to Hamas on his 1999 green card application.

How and why Sarsour was picked to guide Bayraktar at the convention is not clear. Sarsour does have links to MAS’s Chicago chapter.