In Nike‘s (NYSE: NKE) fiscal year Q2 earnings announced on Dec. 20, the sportswear giant beat analyst estimates on both sales and earnings, with impressive gains on some of its important growth initiatives. Still, Wall Street didn’t give the company much credit and the stock stayed flat following the earnings release. Here’s why the market remains restrained and why that could mean the buying window into this great long-term play has been extended.

Nike’s reported sales rose 6% year over year during the quarter, and were up 8% adjusted for currency changes following the U.S. dollar’s appreciation over the last year. Even more impressive is that earnings per share during the quarter rose 11% year over year, up to $0.50 per share and ahead of estimates. The increased earnings seem to have been helped by lower operating costs, as well as timely share repurchases.

The gain was not due to lower taxes during the quarter, which seemed to help earnings in Q1 when just a 2.5% tax rate (because of special one-time tax credits) led to an EPS increase. This quarter, the company paid 24% tax, which makes the 11% EPS gain look even more impressive.

Another highlight in the quarter was that Nike has been able to continue its impressive growth in direct-to-consumer (DTC) sales, which include Nike stores and Nike.com. “It’s clear that DTC continues to be one of the greatest returns on investment,” said Nike CEO Mark Parker during the earnings call. “In Q2, our DTC business grew 23%, with NIKE.com leading the way at 46%. There continues to be much more growth potential ahead for NIKE in DTC.”

Regardless of the above-expected sales and earnings growth, Nike’s stock price has remained flat following the earnings release, keeping it as the worst-performing stock in the Dow in 2016. One reason that analysts aren’t impressed could be Nike’s continually decreasing gross margin, which continued to slip in this quarter as it has in the last few, and this time fell to a multiyear low at 44.2%. Nike has been working on its gross margin and excess inventory problem, so seeing another big decline in gross margin and the 9% increase in inventory year over year have discouraged some analysts. 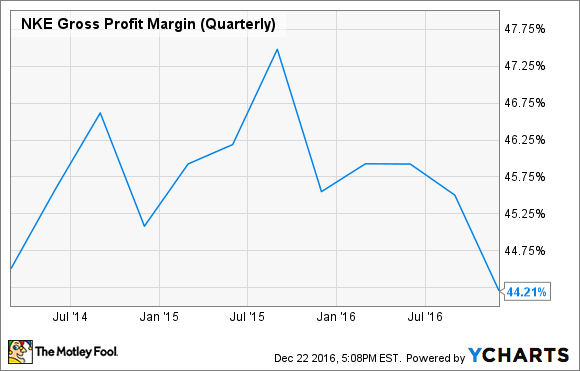 Other than margin pressure, some bearish analysts are pointing to Nike’s weak future orders, a metric by which Nike reports contracts signed by wholesale partners for orders to be shipped in the months ahead. Though Nike stopped reporting future orders in its earnings as of last quarter, it still laid them out in the earnings call. The 4% decline in the U.S. and flat growth worldwide are concerning, and even though the company’s e-commerce sales (which aren’t added into future orders) are surging, wholesale still makes up the majority of Nike sales. Renewed competition from Adidas (NASDAQOTH: ADDYY) — which has been by far the best sports stock of 2016 — and continued competitive pressure from Under Armour (NYSE: UAA)(NYSE: UA), have analysts worried for Nike’s future sales as well.

Why Nike looks good in 2017 and beyond

Regardless of these competitors, margin pressure, and concerns about future orders, Nike has once again topped estimates and found a way to get more gear sold while improving operations, posting even larger earnings gains on those increased sales. For the second half of Nike’s fiscal year 2017, the company’s new strategy to decrease its number of styles but expand its offerings in each could help to reduce inventory and margin challenges. The company’s continued double-digit growth in places like China and Western Europe should help sales continue to grow in the mid to high single digits in the quarters to come. And, with a continued focus on operating efficiency, earnings should increase steadily.

The stock isn’t cheap at 23 times earnings, which is likely partially to blame for the lack of movement in the market following its Q2 earnings, though the company was already fairly valued for the kind of growth it’s posting. However, Nike’s forward P/E is just 19 times by next year’s earning estimates. Looking a few years out, Nike continues to look like a solid long-term play for consistent growth, with the ability to get it done on both the top and bottom lines. For long-term investors, Wall Street’s mixed feelings that have kept this stock deflated still look like a great entry point.

10 stocks we like better than Nike
When investing geniuses David and Tom Gardner have a stock tip, it can pay to listen. After all, the newsletter they have run for over a decade, Motley Fool Stock Advisor, has tripled the market.*

David and Tom just revealed what they believe are the 10 best stocks for investors to buy right now… and Nike wasn’t one of them! That’s right — they think these 10 stocks are even better buys.