Wake up, sleepyheads! It’s the first work day of the new year. Time to shake off your hangovers, shuffle back to our jobs, and try to pretend you know what you’re doing. And if you’re German Chancellor Angela Merkel (which one of you is), that means reassuring your citizens that the enormous problems you’ve caused with your irresponsible actions are gonna be just fine.

Her remarks come less than two weeks after a failed asylum seeker drove an articulated truck into families at a Christmas market in Berlin, killing 12 and seriously injuring dozens more…

But in her annual New Year’s Eve address the under-fire leader was unrepentant, insisting that ordinary Germans should continue to attend public events despite the risk to their own lives.

Dear Citizens: 2016 has been a year of difficult tests. I would like to speak about this with you tonight. But I would also like to speak about why I am hopeful for Germany, and why I am convinced of the strength of our country and our people. The most challenging test, without a doubt, was Islamist terrorism, which has been eyeing us Germans for many years now. 2016 saw attacks in the heart of our country, in Wuerzburg, in Ansbach, and only a few days ago, in a Christmas market here in the Memorial Church in Berlin. And yes, it is particularly bitter and sickening if terror attacks are committed by people who were supposedly searching for protection in our country, who have experienced the helpfulness in our country and who, with these attacks, mock that. Just as they mock those who genuinely need and have earned our protection. So, what is this optimism that I speak about, among deep grief for the dead and wounded? I mean the comfort we can give and receive, which can be felt here in Berlin and in many German cities during these difficult days. And the strong determination to combat the terrorists’ hate with our humanity and solidarity. In pursuing our lives and our work, we are telling these terrorists: “You are murderers, full of hate. But how we live, and how we want to live, is not determined by you. As we are free, humane, and open.”

Well, that was a right purty speech. Or at least as purty as anything can be in that language.

Don’t you get it, everybody? If we just keep shaming these terrorists, if we just keep reminding them that we’re better than them, they’ll cut it out. Just because it hasn’t worked for the past 1,400 years doesn’t mean we shouldn’t give it another try!

In any language, these words ring hollow. Peer pressure doesn’t work on Islamic terrorists, because they don’t see themselves as our peers. We’re not even human to them. Appeasing them doesn’t work. Appealing to their consciences doesn’t work. Giving speeches doesn’t work.

You know what works? Killing them. And, yes, keeping them out. Unless you’d rather be murdered than be called a racist, by people who will call you a racist no matter what.

But hey, at least Angie got her magazine cover: 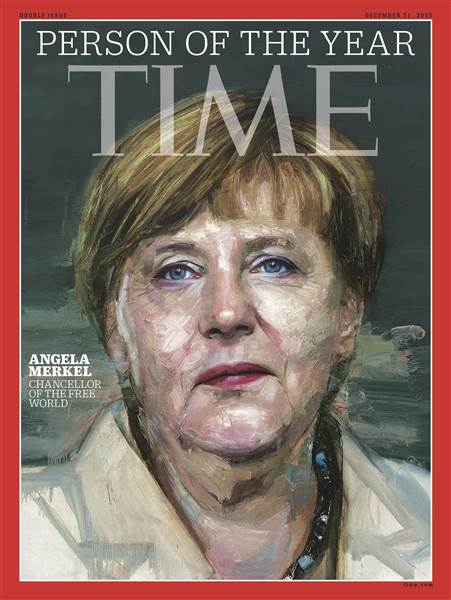 How about now, guys?