For all of the raging on the Left about what an unpredictable President Trump may do to hurt America in the world, there is an uncomfortable quiet over President Obama’s petulant actions in his last days in office. For lame ducks world wide, this is embarrassing.

After insisting for eight years that he reset relations between the United States and Russia, the president now confronts Russia for doing digitally what they have been doing with other methods for 70 years – attempting to disrupt democratic elections. His expulsion of 35 Russian diplomats is very little very late and a poor substitute for failing to develop a cybersecurity policy over eight years. Russian President Vladimir Putin responded by ridiculing Obama’s irrelevancy. He’ll wait for President Trump.

[dcquiz] On Wednesday of this week Secretary of State John Kerry ranted for over an hour in a failing effort to blame Israeli settlements for the president’s decision to alter 40 years of policy with respect to Israel. With no public discussion whatever, President Obama took a few minutes off the golf course in Hawaii last weekend to instruct our United Nations ambassador to abstain from voting on a UN Security Council resolution blaming Israel for centuries of Arab hatred of Jews.

For 40 years the policy of the United States has been that final boundary lines between the Palestinians and the Israelis must be determined by those two peoples in bilateral negotiations. Last Saturday in a 14-0 vote the United Nations decided that, among other things, the iconic Jewish Wailing Wall is now illegally occupying Muslim land.

This is a huge change in policy in the Middle East. It guarantees that criminal charges against Israeli leaders will soon be filed in the International Criminal Court under the Geneva Convention. It eliminates any reason for the Palestinians to negotiate with the Israelis for further cessation of tension between the parties. They will wait for the UN to declare them a state and admit them as a member.

Israeli Prime Minister Benjamin Netanyahu responded harshly to Kerry’s screed pointing out that the United States’ role in this travesty went well beyond allowing it to pass. He claims to have iron-clad proof that the United States was complicit in the drafting of the resolution and actively sought support for it from the other 14 members of the Security Council. Ukrainian President Petro Poroshenko received a phone call from Vice President Joe Biden which succeeded in changing Ukraine’s vote from an expected abstention to a yes. Netanyahu responded by cancelling Poroshenko’s visit to Israel next week. And so it goes. This will not be the end.

The land in question was captured by Israel in the 16-day war 49 years ago, when it was attacked in a coordinated military assault by Jordan, Syria and Egypt. Some land was taken from each and an argument could be made that it should be returned to them. None can be made for awarding it to the Palestinian Authority to whom it never belonged.

During Kerry’s speech @RubinReport tweeted a this:

“Yes John Kerry. If only this orange sliver was smaller there would be peace.”

The map he included covered an area bounded by Istanbul 1000 miles to Israel’s North, Senagal 4500 miles to the West, Somalia 2000 miles to the South and Kyrgyzstan 2500 miles to the East. Approximately 20 million square miles of Muslims committed to the extermination of the Jewish people who occupy 8000 square miles in their midst. And if we could just force Israel to give up a few more acres the Arabs will be satisfied and there will be peace. 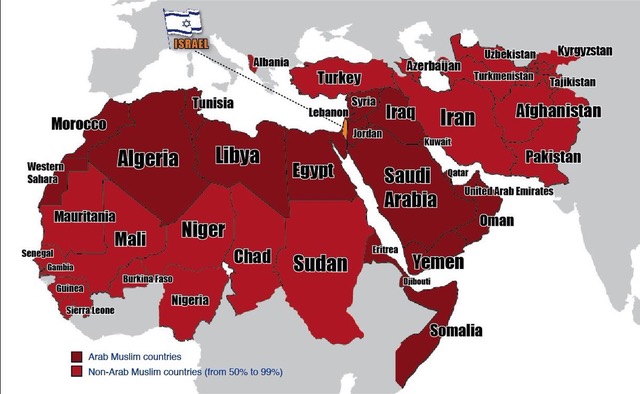 As he is going out the door President Obama’s petulant actions only create problems for President Trump. For Israel it is a matter of life and death.