Good news: high concentrations of toxic metals from a mine blowout caused by the Environmental Protection Agency (EPA) are no longer detectable in the Animas and San Juan rivers, according to an agency report.

The bad news is, fall storms and spring snow-melt likely drove 1,115,539 pounds of toxic metals from those rivers to Lake Powell — a vacation spot for millions of people and water source for drinking and agriculture.

EPA’s final report on the Gold King Mine blowout — caused by agency workers in August, 2015, — found evidence suggesting “the Gold King deposits that remained in the Animas River over the winter period were mobilized early in the spring snowmelt and could be observed through the system, albeit at low concentrations.”

But fall storms and springtime snowmelt in 2016, along with dam releases into the San Juan River, meant most, “if not all, of the Gold King deposits were transported into Lake Powell during this time.” 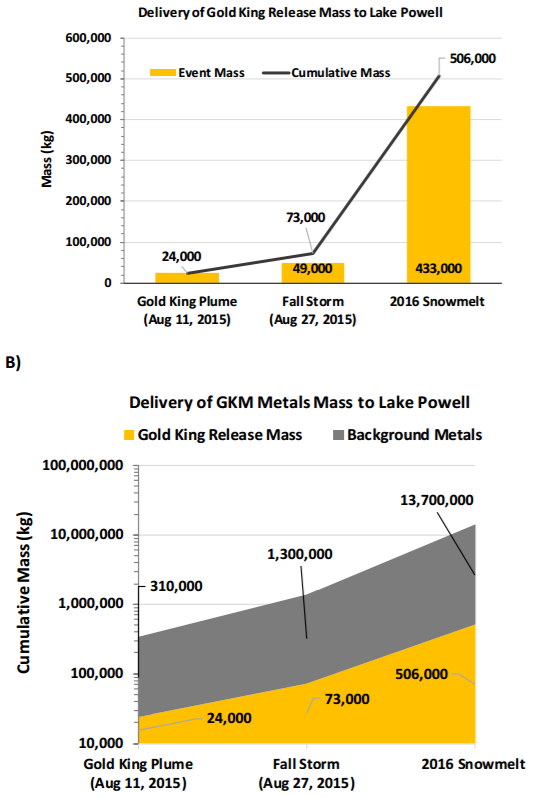 The report generally agrees with EPA’s conclusion shortly after the mine spill that water quality has returned to normal. EPA workers breached Gold King Mine, unleashing 3 million gallons of wastewater, including 540 tons of toxic metals.

Those toxic metals are now likely sitting at the bottom of Lake Powell where they could be stirred up by future storms and surges of water.

Metals released from Gold King Mine, including arsenic and lead, were “transported out of the rivers with snowmelt runoff in 2016.” Most of the Gold King Mine release was made up of iron and aluminum.

EPA took responsibility for the spill, and said water quality in the Animas and San Juan rivers returned to pre-spill levels within weeks of the blowout. Metals dissipated into the riverbed, however, where they were churned up by storms and snowmelt.

EPA claims to have spent $29 million to date testing water quality and setting up temporary water treatment sites, but experts say the damage from the spill could persist for decades.

The agency recently rejected $20.4 million in reimbursement claims from state and tribal governments. Officials will only pay out $4.5 million in claims.

Navajo Nation is suing EPA for $160 million for damages caused by the spill. The tribe initially asked for $1.4 million, but EPA only paid out $300,000.

MUST READ: “Navajos Demand Justice After EPA Polluted Their Water”