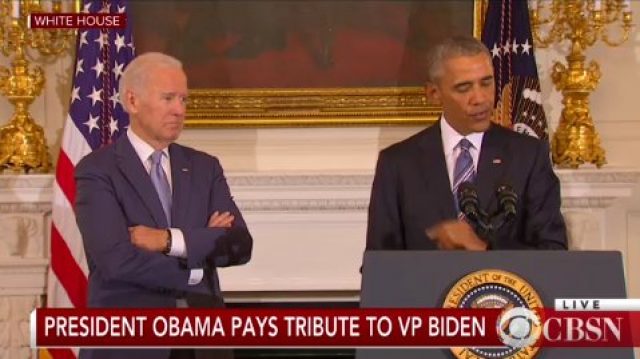 [dcquiz] In a surprise ceremony at the White House Thursday, the president thanked his vice president, who he said has been “a lion of American history.”

“You see Joe’s heart in the way he consoles families,” Obama said. “To know Joe Biden is to know love without pretense, service without self regard and to live life fully. As one of his longtime colleagues in the Senate said — who happened to be a Republican — if you can’t admire Joe Biden, you have a problem.”

“For your lifetime of service that will endure through the generations, I’d like to ask the military to join us onstage,” he continued.

“For the final time as president, I am pleased to award you with the nation’s highest civilian honor: the Presidential Medal of Freedom.”

President Obama on Joe Biden: “He has been a lion of American history” https://t.co/Bhe2SUEe25 https://t.co/fDdVk3RXmc

Biden became emotional as he addressed the crowd at the White House.