The share of Americans participating in the labor force will continue to drop over the coming decades, according to Congressional Budget Office estimates released Friday.

The CBO projects that over the next 30 years the labor force participation rate — or the percentage of noninstitutionalized civilians either working or looking for work — will decline 3.7 percentage points, from 62.8 percent in 2017 to 59.2 percent in 2047.

According to CBO, the participation rate will decline faster for men than for women.

The primary cause of the decline, CBO says, will be the ongoing retirement of baby-boomers. CBO reached this conclusion by controlling for age — maintaining the same age and sex composition of the population from 2017 through the next 30 years. When controlled for age, CBO said, the decline largely evaporated.

“Therefore, aging essentially accounts for the decline of 3.7 percentage points over the next 30 years,” CBO explained in a blog post previewing the agency’s full economic forecast, slated for release later this month.

According to CBO, in conjunction with the aging population there are three additional factors adding to the decline in participation: including a lower participation rate among the generations replacing baby-boomers, more people receiving disability benefits, and the declining marriage rate. 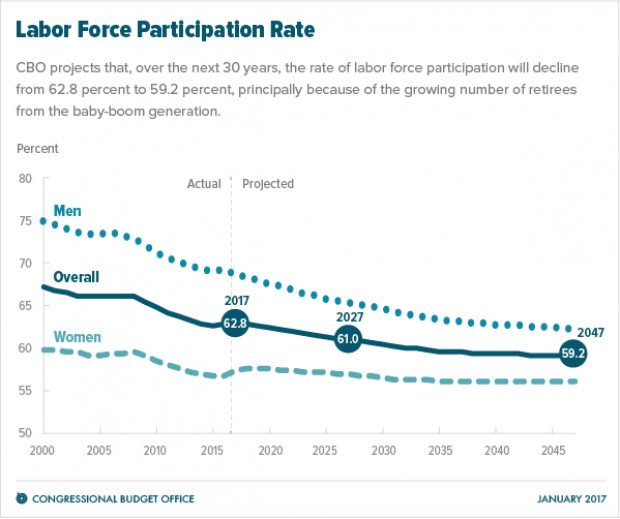