Joss Whedon, the director and writer behind “The Avengers” and several other Hollywood films, on Friday night expressed his desire for a rhinoceros to “fuck” Republican House Speaker Paul Ryan “to death with its horn.”

Whedon, a very vocal Hollywood liberal who was an active Hillary Clinton supporter during the 2016 election, often tweets of his hatred for all things Republican. This appears to be the first time he has advocated for the death of a Republican, though Whedon said he did so “because it’s FUNNY.” 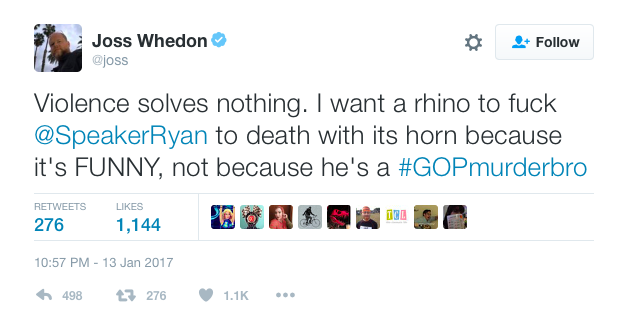 Whedon, worth an estimated $100 million, has had other meltdowns on Twitter and received immediate blowback from the platform’s users for his tweet.

I’m a just gonna save this, because the internet never forgets when someone is being a cunt. @joss @SpeakerRyan pic.twitter.com/CXGgbvrfif

.@joss‘s tweet about Paul Ryan is an example of: pic.twitter.com/uRjkNTqesv

@joss @SpeakerRyan Show us on the doll where the evil Republican touched you, Joss.

@joss @SpeakerRyan Trump’s win was worth it just for this. the meltdown is beautiful

@joss good job on making your side seem even more unhinged & detached from reality. pic.twitter.com/S01WWYMe9f

@joss @SpeakerRyan Another one of Hollywood’s finest showing why Trump won.